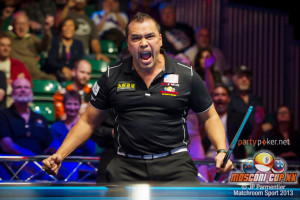 AFTER EIGHT events on the Official Mosconi Cup Team USA Ranking list, it is Rodney Morris who leads the way following a win at the Don Coates Memorial.  Having had a great start to the MC qualifying season, the ‘Rocket’ is looking to make a return to the side following his last appearance in 2013. A Mosconi Cup MVP back in 2003, Morris has made a total of nine appearances in the event with a 48% win record.

Filling out the other two automatic spots are Mike Dechaine who in second place as he looks to make his fourth MC appearance. Hot on his heels is Oscar Dominguez, a winner of two events this season and just three points adrift.

In other US-related Mosconi Cup news, there are two additional events added to the roster while another event has been upgraded due to additional added money.

In early July, the West Coast Challenge 10-Ball is taking place at California Billiards in Fremont, CA. This event has a 128 player field, $10,000 added and is played on 9ft Gold Crowns and is therefore a Level 2, Grade 2 event.

Big time pool returns to the Hard Rock in Hollywood, Florida as Vivian Villarreal hosts the Tornado Open at the end of September. Played on 9 footers, the event boasts $25,000 of added money and is a Level 2 Grade 1 event.

Finally, the Texas Open 9 Ball Championship in September has increased its added money from $5,000 to $8,000 and therefore moves from being Level 2 Grade 1 event into a Level 2 Grade 2.

The 2016 Mosconi Cup takes place at the Alexandra Palace in London from 6th to 9th December. Three of the five spots on Team USA will be allocated to the three highest placed players on the ranking list following the conclusion of the US Open in October. A full list of all ranked players is available at http://www.matchroompool.com/mosconi-cup/#teamUSA

The roster of events has been significantly expanded from 2015 and this year there are now a total of 28 events which carry Mosconi Cup points. These events have been grouped into three categories: Category One is major international events both in the USA and overseas; Category Two is events played on 9 foot tables in the US and Category Three is events taking place in the US played on 7 ft tables.

The next event on the ranking list is the Chuck Markulis Memorial at Hard Times, Sacramento in May, followed by the Ginky Memorial in New York in the same month.

Tickets for the Mosconi Cup are available from www.matchroompool.com or for packages from the USA contact diane@thecruiseplanner.com