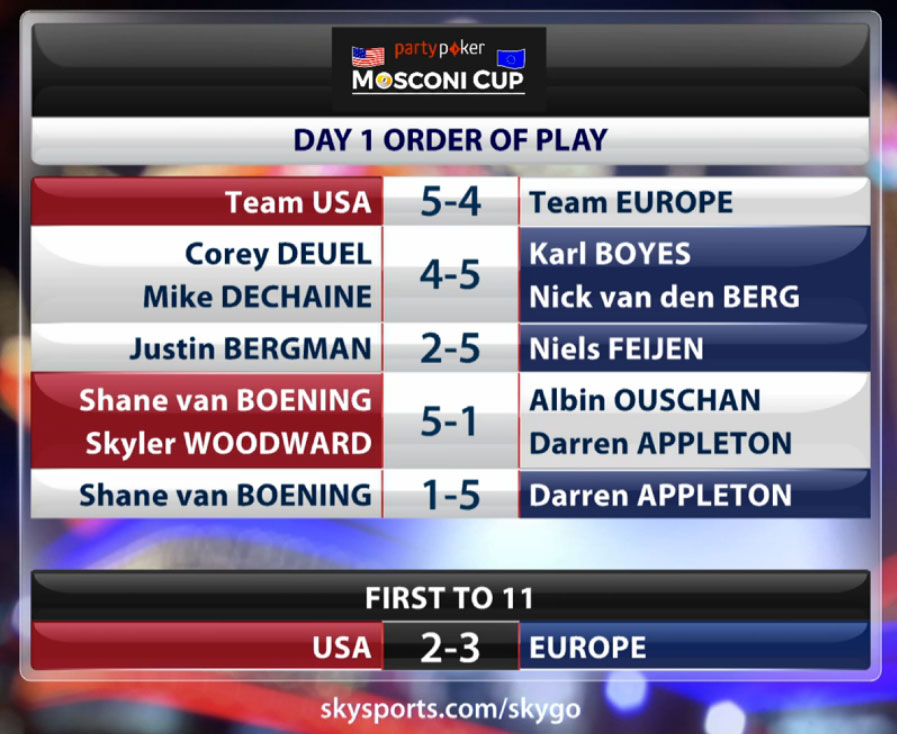 THE 22nd ANNUAL PartyPoker Mosconi Cup got underway on Monday at the Tropicana in Las Vegas as Europe got the better of an entertaining session in their defence of pool’s ultimate trophy. 3-2 was the final account but it was tense stuff as both teams worked to settle in the intimidating atmosphere.

There will be no respite tomorrow when five more matches complete and Europe’s captain Marcus Chamat was pleased with the first day; “Emotions were up and down today. Every match felt like it was a tough game. It is a new situation for me as the captain but I gained a lot of confidence today. I got really nervous when the table was open but then I would think, this is the greatest team in the world why should I get worried? But when the balls are lying there your heart is so in it.

“Every match is big, every rack is big. We have a 3-2 lead but we know that tomorrow will be very tough again. We know we have to be really good to beat this team. The American team showed today that they are a very good team, stronger than they have been in the last five or six years. We have to come out strong tomorrow. ”

With around 1,000 people packed into the arena both teams strode in to tumultuous applause.
That died down for the respective national anthems – a first for the Mosconi Cup – before the team game got underway. It was a win for the USA as Mike Dechaine enjoyed a huge fluke in the deciding rack as he missed the three ball but saw it creep into the top right pocket. From there he just about hung on to clear the table for the early lead.

The US were three balls from going two ahead in the next but Dechaine, partnered by Corey Deuel, missed the brown 7, trying to do too much with it. That allowed Karl Boyes and Nick van den Berg to close out the rack and level the match.

Boyes commented, “It is a massive crowd, it is very loud, very exciting, so you are pumped up and your adrenaline is very high. We threw the team point away in the end and Mike Dechaine got a bit lucky in the last rack but you get punished for making mistakes. Nick played some great shots in our doubles match and it was a big point for the team.” 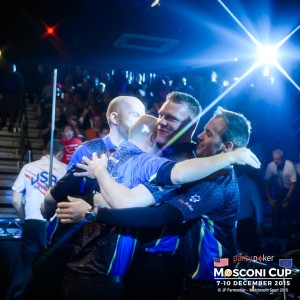 Team Europe took a 2-1 lead in the third game as Niels Feijen enjoyed some good fortune to defeat Justin Bergman playing in his second Mosconi Cup. Feijen had a couple of flukes which set him on the road and when Bergman missed an elementary 7 ball late in the game, it sealed his fate.

“This is the only time of the year we play with the five guys and you really live up to it, especially last week as it is like a rollercoaster as you get closer and closer to the entrance,” said Feijen.

“Every time you know what to expect but every time you get here the noise is unreal and it is really good fun.” 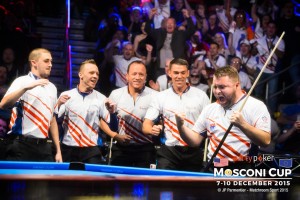 The USA, egged on by an enthusiastic crowd, weren’t finished and it was 22 year old rookie Skyler Woodward who was the star of the show. Partnered by Shane Van Boening, he gave the impression of a man having a knock at his local room as he showed no signs of nerves in the pressure-packed environment.

They enjoyed a 5-1 win against Darren Appleton and Albin Ouschan as they kept their opponents away from the table and killed off the racks.

It was left to Appleton and Van Boening to determine who took the overnight lead and it was the Englishman who continued his Mosconi Cup dominance over Van Boening with a comfortable 5-1 lead.

American captain Mark Wilson was reflective on the day’s events; “Naturally 3-2 or 2-3 was the most likely scenario and we had talked about it beforehand. The unforced errors made the difference when we didn’t win a match.

“In doubles with Corey and Mike we had ball in hand but with an open table we didn’t get out. Then they broke and ran a few more times than we did today and they were the better team today.

“We thought that Skyler would be fine out there but now we know for sure. He validated his presence on the team, he is loose and he is really going to be the intangible thing which maybe Europe isn’t aware of.
“Corey is so creative, he gets out from places that other players don’t. He brings a heck of a plus to us there and Justin, even though he lost his match, looked terrific out there. He was so calm and at home that he is going to have a big Mosconi Cup.

“We want to minimise the unforced errors, we will talk about some of our safeties and we want to be really positive tomorrow.”

Notes: Matchroom Sport are one of the world’s leading producers of televised sport and are responsible for over 1,000 hours of original programming across a range of sports. Based in the UK and chaired by charismatic founder Barry Hearn, the Mosconi Cup is one of a stable of pool events that include the World Cup of Pool and the World Pool Masters.a