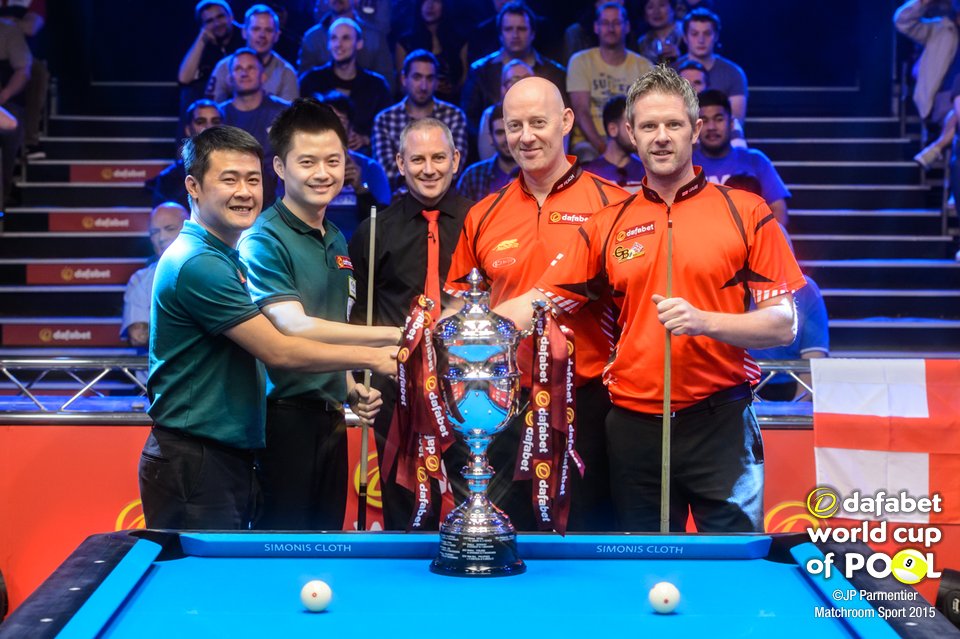 orld Cup of Pool, beating England B 10-8 in the final.

It looked like a case of so near yet so far yet again for Chinese Taipei, four-times semi-finalists in the nine-year history of the scotch doubles event and represented this year by Ko Pin Yi and Chang Yu Lung. But a run of five consecutive racks saw them overcome their 7-4 deficit to arrive on the hill.

They lost control of the table at that stage and the England pair of Mark Gray and Daryl Peach clawed one back before a missed 3-ball proved costly for the home team.

For Ko it completed a dream fortnight after he won the WPA World 9-ball Championship in Doha last week.

Earlier in the tournament this England side had spoken of trying to win each ‘mini session’, the three racks played between commercial breaks. That is exactly how they started the final, leading 2-1 after the early changes.

England B’s route to the final had been one of the toughest in the tournament’s history. Starting out as the 15th seeds they saw off the challenge of Sweden in the first round and defeated three-time winners Philippines in the second before quarter and semi-final victories over Finland and Japan respectively. They remained bookmakers’ underdogs throughout the competition.

The hosts’ early lead could have been even better had Gray not missed a 5-ball in the third but England soon opened up a healthy advantage, leading 5-1 with Chinese Taipei restricted to their seats bar a brief safety exchange in the fifth having broken dry in the fourth.

Despite a succession of dry breaks Chinese Taipei pulled back to 5-3 when Gray miscued attempting to make the 8 to the centre and closed the gap to one in the next rack, despite again failing to make a ball on the break. But they couldn’t take advantage as they again broke dry and England ran out for a 6-4 lead.

England, who were not struggling with the break, then increased their lead courtesy of a 2/9 billiard completed by Gray.

But then the final turned in Chinese Taipei’s favour. Leading by three racks, Gray opted for an offensive jump shot, leaving the 2 open for Chang. He missed but the ball fell safe, however Peach couldn’t keep it hidden and this time the fourth seeds made no error.

At the sixth attempt Chinese Taipei finally found success on the break and though they let England in having not made a tough 2/6, they returned to the table to return to within one of the hosts and were level a rack later.

With the break now seemingly worked out, Chinese Taipei were on a roll and England could only look on from their chairs as the early lead had become an 8-7 deficit.

Then came one of the shots of the tournament. Invited by England to play after they had pushed out, Chang jumped over the 6, 9 and the edge of the 7 from the bottom right of the table to the top left to strike the 1 perfectly into the corner pocket. A packed York Hall showed its appreciation and Chinese Taipei made their fifth consecutive rack for a 9-7 lead.

That run was broken when England benefited from a fluke snooker on the 2 ball for 9-8. However, when Gray missed the three in the 18th rack Ko and Chang stepped up to assertively clear the table and end Chinese Taipei’s long wait for a World Cup of Pool title. 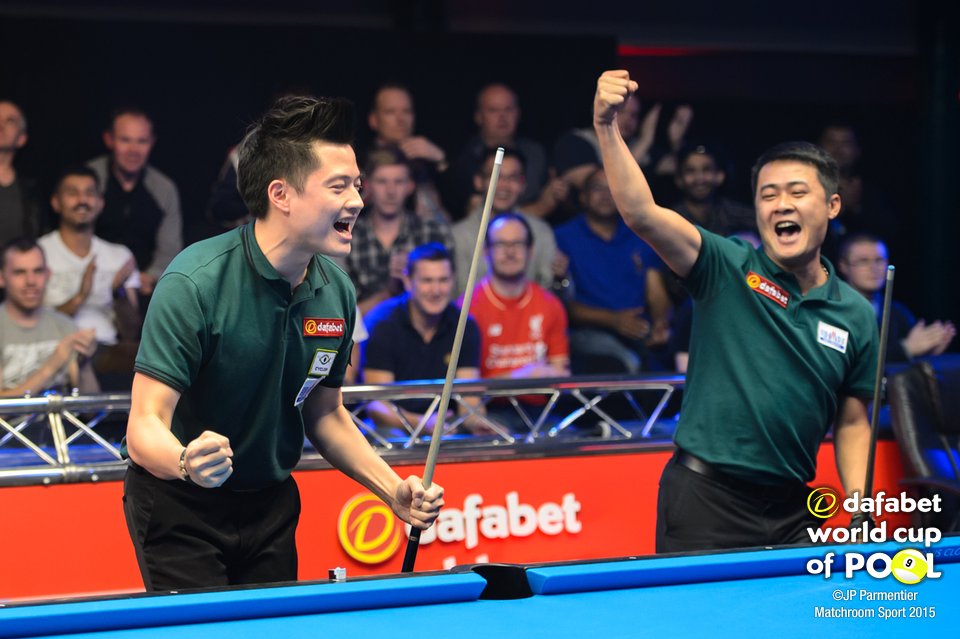 An elated Ko said, “It is a fantastic feeling to win the World Cup of Pool and we are both very proud.

“England had a very good team and they had been playing well in the tournament. They beat some really good teams and had the home crowd on their side so we knew it would be a difficult final.

“It was a difficult start because England won a lot of the racks and they had the break worked out. But we encouraged each other and we knew we still had a chance. We had belief in our ability so even when we were trailing we knew we could come back into the game. We struggled with the break but we were making all the other shots.

“Personally, this adds to a great year. I have won the 10-ball, 9-ball and now the World Cup titles.”

Gray had only appeared in one previous World Cup of Pool and was a beaten finalist on that occasion too, losing alongside Peach to USA in 2008.

“It is devastating to lose because it is definitely one we should have won,” said Gray. “We were 7-4 up and really we should have been 9-2 up, we just made some positional errors. At 5-2 we had the easiest clearance to go 6-2 up but we didn’t manage it and in the next rack we had an easy carom but missed that too.

“They played very well in the second half of the match and then at the end we had another chance but lost a bit of position. I tried to play a Houdini shot but then missed the pot trying to over compensate for position.”

Peach added: “We are disappointed that we didn’t produce our form from earlier in the tournament in the final. We struggled a little bit in the semi-final but came through and we hoped to lift ourselves for the final.

“We were a little bit fortunate to be in front because they weren’t making balls off the break and that gave us some chances. We had chances to go 9-2 up but didn’t take them and then they started to make balls on the break and we seemed to be sat in the chair for a long time.

“You keep going and you try and believe but you are sat there out of stroke and your arms start to feel like led. We managed to get one back but I left Mark a little straighter than I wanted to on the 3-ball and he had to try and force it, he missed and that was that.” 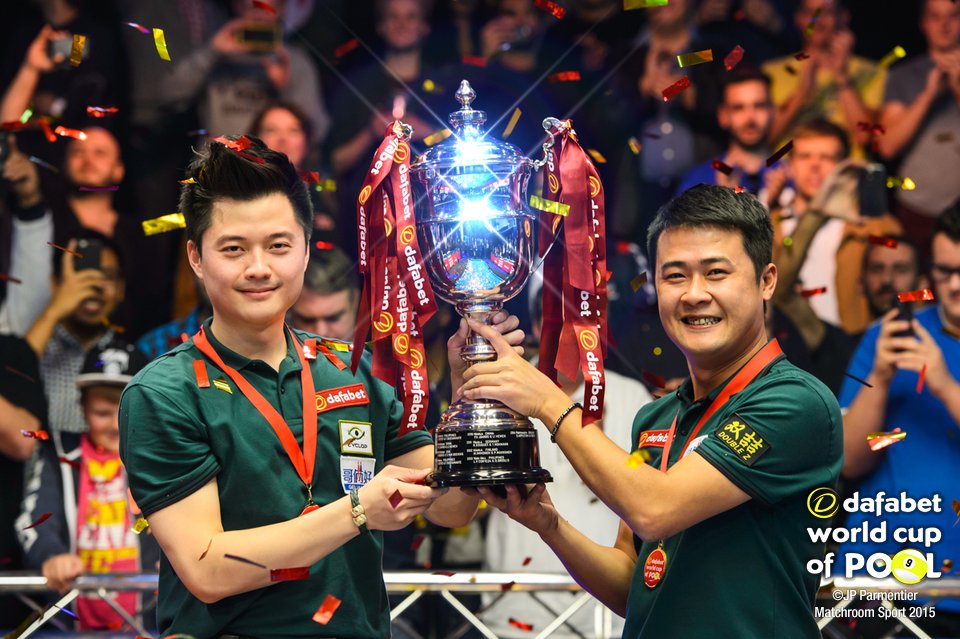 The following broadcasters are screening live coverage of the Dafabet World Cup of Pool:

For fans outside those territories, Perform Group will be streaming the event via their www.livesport.tv service. In addition the Dafabet World Cup of Pool is syndicated around the world as 31 x 1 hour programmes by Matchroom Television. Featuring 32 two-man teams from around the world, the Dafabet World Cup of pool is celebrating its tenth year as defending champion England attempt to become the first team ever to successfully defend the title. The event runs from 22nd to 27th September.

The event will be produced by Matchroom Sport Television and televised live on Sky Sports and then syndicated internationally as 31 x 1 hour programmes.