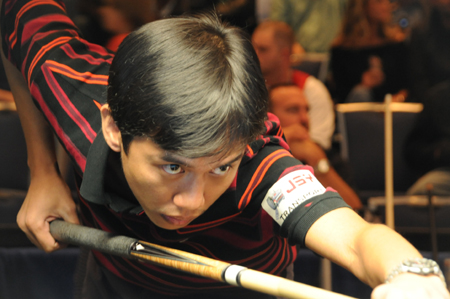 By the narrowest of margins, Lee Van Corteza is the US Open 10-Ball Champion.

Corteza entered play on the final day as one of just two undefeated players, but was sent to the one loss side by Taiwain’s Li Wen Lo 9-6 in the match for the hot-seat.

On the one loss side, Corteza met up with America’s Shane Van Boening. Van Boening had gotten his break working at typical Van Boening proficiency, and most fans in attendance expected him to go ahead and win the event. That prediction looked to be a good one, as Van Boening led 4-1 early in the match. Corteza would fight back to tie the match at 5-5, only to drop the next three games and face an 8-5 deficit. Corteza calmly won the next four racks for the 9-8 win and another shot at Lo in the final race to thirteen.

The final match between Corteza and Lo started out as a close one with the players tied at 1-1, 2-2 and 3-3. Early in the match, a strange thing happened, as Lo’s usual pace at the table slowed down to a snail’s pace. Lo was studying shots for multiple minutes before making up his mind and it seemed to affect his game as Corteza pulled out to a 7-3 lead. It was at this time that tournament director Ken Shuman warned both players about their pace at the table and the warning seemed to get Lo’s attention. He quickly raced back to tie the match at 7-7. From that point in the match, neither player was able to earn more than a two rack lead and the players found themselves tied once again at 12-12, with just one rack to be played for the tournament. Both players saw trips to the table in that final rack, but in the end it was Corteza who calmed his nerves and ran the last few balls for the tournament win.

The win was Corteza’s second win in just three weeks, as he also won the Mezz Hard Times Open event that was ran at Hard Times Billiards in California as a warm-up to this event. Corteza pocketed $20,000 for the win, while Lo settled for $12,500 in second place prize money.