The CSI Invitational 10-Ball Championship kicked off on Friday with sixteen of the top players in the world competing in a round robin race to 9 event. Players were split into four groups of four players with the top player from each group advancing to a single elimination bracket.

Group A play saw Shane Van Boening defeat Thorsten Hohmann 9-7 and Warren Kiamco 9-5. Van Boening trailed Hohmann 3-0 early, but took control of the match late when Hohmann fouled while addressing the cue ball and gave up ball in hand. Other Group A action saw Kiamco defeat Pin-Yi Ko 9-5 and Ko defeat Hohmann 9-7. If Van Boening can defeat Ko on Saturday, he will win the group. A Ko victory would lead to either Ko winning the group or a three way tie depending on how the Kiamco/Hohmann match turns out.

Group B saw wins by Dennis Orcollo and Mike Dechaine. Orcollo defeated a struggling Jung Ling Chang 9-7. Orcollo held a three rack lead for the majority of the match and never appeared to be challenged by the Taiwanese star. The Dechaine/Appleton match was a close one with the score tied five times and four lead changes. Dechaine was the first player to hold a two rack lead at 8-6 and he clinched the match 9-7 when Appleton missed a ball during a run in the sixteen rack.

Group C played to a packed house with Efren Reyes playing Ping-Chung Ko on the TV table. While Reyes proved that he can still move the cue ball better than most players alive today, his ball pocketing left something to be desired and he couldn’t stay with Ko as he dropped a 9-6 match. The second match of the round saw Ralf Souquet come back from an 8-5 deficit to tie his match with John Morra 8-8. Souquet broke dry and Morra locked him up with a safety and there was nothing Souquet could do but sit and watch Morra run out for the 9-8 victory. 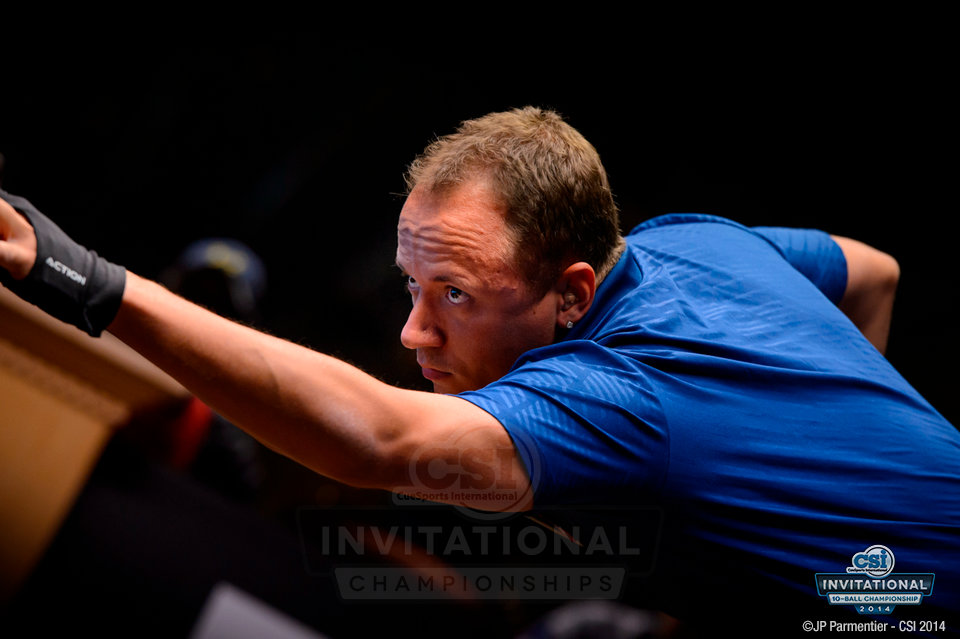 Group D saw dominating performances from both Jayson Shaw and Francisco Bustamante. Shaw ran over American Corey Deuel 9-4 and Bustamante came back from a 0-3 deficit to win nine of the next eleven games for the 9-5 victory.

Play continues in all four groups on Saturday, and final winners of groups A and B will be known by the end of the days play.

Watch the rest of the CSI Invitationals and challenge matches live at www.playcsipool.com.  CSI is the parent company of the BCA Pool League and the USA Pool League. CSI also produces independent events such as the US Bar Table Championships, Jay Swanson Memorial, US Open One Pocket Championship, US Open 8-Ball Championship, US Open 10-Ball Championship, CSI Invitationals, and CSI Challenge Matches. Visitwww.playcsipool.com,www.playbca.com, andwww.playusapool.com for more information and visit the CueSports International YouTube channel for lots of great content.