APA MEMBERS POCKET MORE THAN $500,000 IN CASH AND PRIZES AT NATIONAL SINGLES CHAMPIONSHIPS

The final round of the 9-Ball Shootout featured three championship matches, one for each Skill Level Tier, with two shooters in each match competing for $10,000 in cash and prizes. 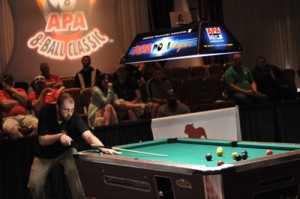 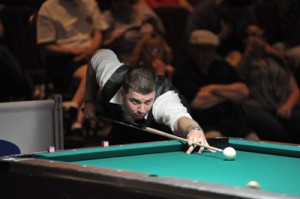 In the White Tier, Eddie Conklin, Jr. of Bayonne, N.J., defeated Rodger Doyen of Brandon, Fla. Conklin Jr. defeated Mathis Martines of Greensboro, N.C., in the semifinal round to advance to the finals. Doyen advanced to the finals by defeating Erick Carrasco of Ridgewood, N.Y. Martines and Carrasco tied for 3rd Place. 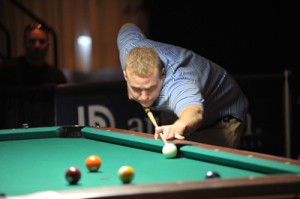 Daniel Praty of San Diego, Calif., was awarded the Sportsmanship Award in the 9-Ball Shootout.

More than 4,000 poolplayers made it to the Regional Level of the 9-Ball Shootout before the field was whittled down to 310 men and women competing for 9-Ball crowns in each of three Skill Level Tiers.

In the finals of the 8-Ball Classic, four champions each took home a prize package worth $15,000 for their performances. 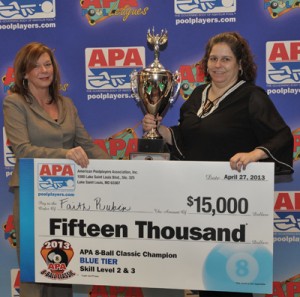 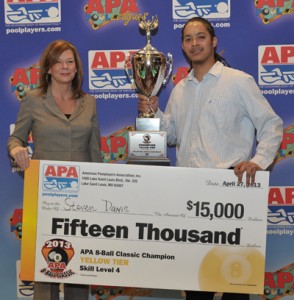 In the Yellow Tier, Steven Davis of Minneapolis, Minn., defeated Clayton Fulcher of Loganville, Ga. Davis advanced to the finals by defeating John Falco of Benton, Ark., earlier in the day in the semifinal round.  Fulcher defeated Douglas Moe of Easton, Conn., in the semifinals  Falco and Moe tied for 3rd Place. 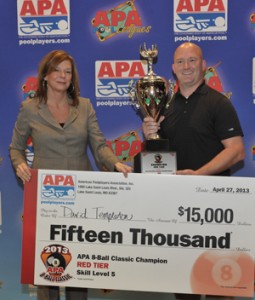 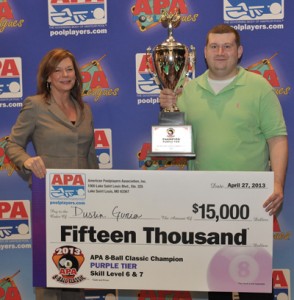 In the Purple Tier, Dustin Gunia of Omaha, Neb., defeated Nathan Moore of Warren, Mich. Gunia defeated John Scudder of Portland, Ore., in the semifinal round.  Moore advanced after defeating Ever Valasques of Hyattsville, Md. Scudder and Valasques tied for 3rd Place.

Michael Andrew of Oshawa, Ont., was awarded the Sportsmanship Award in the 8-Ball Classic. 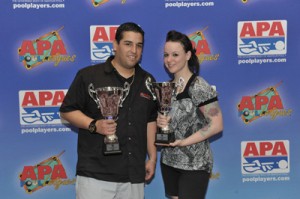 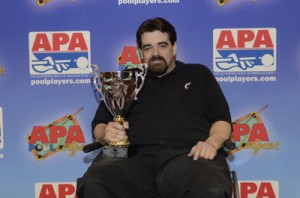 The Wheelchair Challenge made its debut at the National Singles Championships after being held in August during the National Team Championships for many years. In the finals, Charlie Hans of Middletown, Ohio defeated Ron Bates of Coldwater, Mich., to take home $2,000 in prize money. Bates received $1,000 as the Runner-Up. Forty-two players competed in the Wheelchair Challenge.

The APA, based in Lake Saint Louis, Mo., sanctions the worlds largest amateur pool league, known as the APA Pool League throughout the United States, and as the Canadian Pool League in Canada.  Nearly 270,000 members compete in weekly 8-Ball and 9–Ball League play. The APA is generally recognized as the Governing Body of Amateur Pool, having established the official rules, championships, formats and handicap systems for the sport of amateur billiards.