The Asian contingent was strong, but not invincible at Emerald Billiards

New Iberia, Louisiana  World Champion Francisco Bustamante, Double World Champ Ronnie Alcano, recent Johnny Archer Classic Champion Warren Kiamco, Qatar National Team Coach Israel Rota. All out. With the inclusion of Wang Can, all the Asians are out of the tournament. The Championship Cloth 5th Annual Pro Classic events are a pro 9-Ball and 10-Ball event during October 16th-20th, 2012. The events take place side by side to the Ozone Billiards US Amateur Open all hosted by Emerald Billiards and produced by Dragon Promotions. The event is co-sponsored by Predator Cues, Poison Cues, Aramith Balls, Pool & Billiard Magazine and sanctioned as an ABP International Rankings Points Tournament.

Ronnie Alcano crushed Charlie Williams 9-1 in the first round, but was then stopped by Rodney Morris. He was later eliminated by his own countrymen Kiamco 9-7. Kiamco took losses to Wang Can and then eliminated hill hill by Archer. Rota had a bad day as he went 2 and out to Adam Smith and Ronnie Alcano.

Francisco Bustamante took a hard lost to Mike Davis after being up 8-5, and lost 4 from there. “I couldn’t make a ball on the break!” he said afterwards.
Bustamante was able to stave off Williams 9-3, but then fell to Rodney Morris 9-5.

The Filipinos did make their mark,however. Alcano snapped off the 9-Ball division the night before.

Follow the pros on the ABP Pro Tour at www.facebook.com/ABPpros

The events are being streamed live on www.poolactiontv.com  and sponsored by Ozone Billiards and Predator Cues. 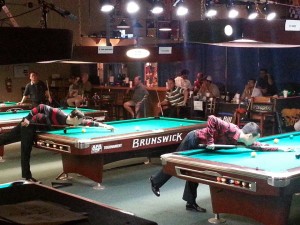