Broomfield, Colo., July 19, 2012 – The United States Billiard Media Association today announced that Karen Corr will be inducted into the Billiard Congress of America Hall of Fame in 2012.

In 1998, when Corr moved to United States and traded snooker for American 9-ball she attacked the Women’s Professional Billiard Association Classic Tour with precision shooting and unbreakable concentration. Corr’s quick rise to the top and her consistent dominance on American soil has earned her the only spot in this year’s BCA Hall of Fame class.

The Northern Ireland born Corr, 42, will be formally inducted into Greatest Player wing of the BCA Hall of Fame on October 26, 2012 during ceremonies at the Holiday Inn in Virginia Beach, VA. 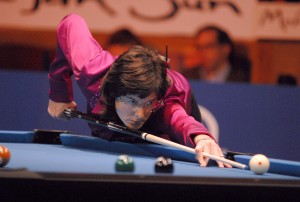 Shortly after winning her fourth world snooker title in 1997, Corr moved to the U.S., switched her game to 9-ball and raced through one WPBA qualifier after another in pursuit of a Classic Tour touring card. After just six months, Corr was ranked 24th in the WPBA, rising to No. 4 in 1999. She captured her first Classic Tour title in 2000, the Cuetec Cues Players Championship. She added two more tour titles in 2000, and then rose to the No. 1 ranking in 2001 with an amazing six titles. In the same year, she also was named Player of the Year (POY) by Pool & Billiard Magazine and Billiards Digest, breaking Allison Fisher’s string of five consecutive POY honors.

In her 13 years playing in the U.S., Corr has won 15 Classic Tour titles, four BCA Open titles, three WPBA National Championships and three Tournament of Champions titles. She has won numerous international and regional events and was runner-up twice at the WPA World 9-Ball Championships. Corr also has a Joss Northeast Tour title to her credit and from 2001 through 2008 she was one of the open tour’s most successful players.

“It’s awesome to be appreciated this way for your skills,” Corr said after learning of the honor. “And I want to thank the people who vote for the Hall of Fame.”

Corr left the Classic Tour a year ago to be with her terminally ill mother in England. Diane Corr, 71, passed away at the beginning of July in 2012.

“This is a nice way to start my new life,” Corr said. “I’m back in the States and pool will be my life again. I’ve got a bit of catching up to do, but I appreciate the opportunity to make a career in cue sports.  Hopefully, I have a few titles left in me.”

Voting was conducted by the USBMA Hall of Fame Board, which consists of USBMA members, elected At-Large members and living members of the BCA Hall of Fame. Induction in the Greatest Players category is awarded to the player named on the most ballots. A second player is elected if both players are named on more than 70 percent of the ballots.

Founded in 2007, the United States Billiard Media Association (USBMA) is a non-profit association dedicated to elevating the visibility and status of billiards in the media at large.  The USBMA consists of professional print, radio, TV, public relations and Internet media persons who cover cue sports.  One of the association’s main functions is electing of billiard media members to the Billiard Congress of America’s Hall of Fame Board for the purpose of nominating and electing players and notable figures to the BCA Hall of Fame.