Billy Cheng wins B/D 9 Ball Tri-State at Gotham City Billiards. His tournament trail included wins over Samson Kelly 7 – 6; Rapheal DaBreo 7 – 5; Tien “Max” Tran 7 – 2; Joei Huang 7 – 2; and Kapriel Delimelkonoglu 7 -5, before suffering a loss to veteran Carl Yusuf Khan “The Warrior” 7 – 4. Carl was now in the Hot Seat after six consecutive wins, and Billy poised for a fight in the semifinals. In the meantime, Dave Shemperis who also suffered the same fate as Billy, having lost to Carl 7 – 6, won his next four matches to reach Billy. With Billy rested and Dave tired from his previous matches, the match ended with Billy winning 7 – 3. The final match between Carl Yusuf Khan and Billy Cheng went back and forth. At Six all, Billy was finally able to rally before Carl, and closed winning two more games and sinking the nine on the break for a 9 – 6 victory. All three players are to be congratulated for their fine play along with Gary Murgia for his 7 – 2 win/loss record. The next Tri-State event is a $500  Added A/D to be will be held at Castle Billiards, E. Rutherford, Nj next week, December 10th. As in the past, Kevin and Isabel Buckley extended themselves with additional prize funds, great equipment and hospitality. Please provide a thank you to Sterling-Gaming, Ozone Billiards, Ron Tarr Cues, Kamui Tips, Phil Capelle, BlueBook Publishing, Human Kinetics for their sponsorship leading to this event. 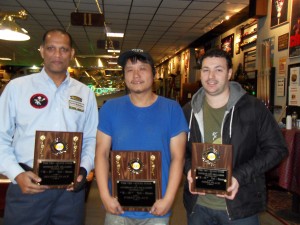