DOOMSDAY FOR THE DUCHESS

ALLISON FISHER MAKES A HASTY EXIT FROM THE WOMEN’S WORLD 9-BALL CHAMPIONSHIP ON DAY ONE IN SHENYANG, CHINA

BY TED LERNER IN SHENYANG, CHINA

Photos by Alison Chang for the WPA

September 22nd, 2011 will be a day Allison Fisher would love to soon forget.

Fisher, one of the greatest women players of all time and a four time World 9-ball champion, crashed out of this year’s Women’s World 9-ball Championship just barely after the event had gotten underway in the northeastern city of Shenyang, China.  The “Duchess of Doom,” who finished second last year in this event, lost twice in one day and will now have to watch the remainder of pool’s premiere women’s tournament from the stands.

Things began ominously for the Hall of Famer when she drew Taiwanese great Shin Mei Lui in her first match of the group stage in the 64 player event on Thursday. With six world titles between them, the two slugged it out right to the end, with Liu taking the win by a nose, 7-6.

This sent Fisher over to the losers side of her group where she faced a do or die battle against rising Korean talent Park Eun Ji in the last session of the evening. The match took on extra significance because it was played on the TV table in front of a packed house inside the Liaoning Hunnan Sports Training Base arena.

With the score tied at 2-2, things started to go awry for Fisher, while everything came together for Park. The 23 year old Korean played the match of her career, potting confidently while working the cue ball with absolute precision. When she did get a chance at the table Fisher simply couldn’t find a groove and found herself down 6-2. Fisher started a fight back but then, at 6-3 behind and running the table, she lost position on the 9-ball then proceeded to scratch, literally handing the match to Park.

Park now gets one more chance on Friday to move into the knockout stage of 32.

This is the third year running that the Women’s World 9-ball Championship is being held in this city of 7 million people. 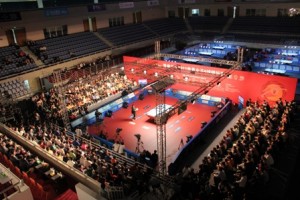 The 64 players have come from 25 nations and the strong field of the world’s best women pool players promises plenty more fireworks to come over the next three days.

The three sessions played in the afternoon and evening on day one saw 16 players eliminated from the field with Fisher clearly the biggest name to exit the tournament so far. It was easy pickings for the other big names, though, especially the popular Chinese stars. 2009 World 9-ball Champion Liu Shasha, 17 year old phenom Chen Siming and superstar Pan Xiaoting all cruised to easy victories.

The Philippines lone two entries are still alive. Rubilen Amit romped to a 7-1 win in her first match, while Iris Ranola rebounded from a 7-1 drubbing at the hands of Pan Xiaoting to win her losers side match 7-1 over India’s Indira Gowdi. Britain’s Kelly Fisher got one back after losing earlier in the day with a well deserved 7-1 win over Singapore’s Chai Charlene.

The ladies are back at it on Friday morning in Shenyang for a busy day of action. The group stages will be completed by the afternoon with the first round of the final 32 single elimination knockout stage set to begin in the evening session. The field will be down to the final 16 by the end of Friday’s play.

The WPA will be providing full coverage of all the action at the 2011 Women’s World 9-ball Championship. Fans around the world can follow matches as they happen via our live scoring platform. The live scoring button can be seen on the front page of the WPA’s website, www.wpa-pool.com . There you can also see the brackets icon which will give you updated standings from each group and the knockout stage.

In addition,  the WPA  will be providing insights and analysis with articles posted several times daily on the WPA home page. Fans can also follow the action via the WPA Twitter page, providing fans with instant updates, insights and scores  as they happen. The WPA’s  Twitter user name is @poolwpa. You can go directly to our Twitter page at, http://twitter.com/poolwpa.