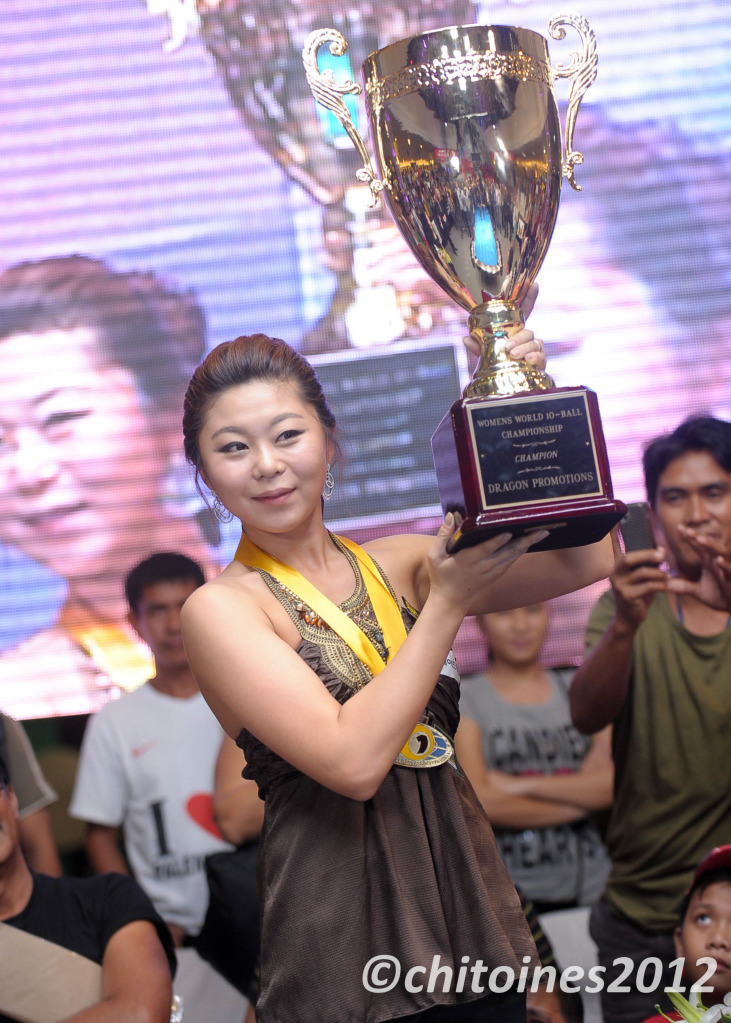 Manila, Philippines-  Korea’s Ga Young Kim finally overcame her demons to claim World Championship glory for her country. Kim on her second appearance in the finals of the the Yalin Women’s World 10-Ball Championship, faced last year’s #1 in the world Siming Chen of China, and completely dominated the championship match. Kim’s victory has put South Korea back on top of women’s pool.

The Dragon Promotions produced 4th Annual Yalin Women’s World 10-Ball Championship is the most followed women’s event of the year. In the host country of the Philippines, it is the biggest female sporting event of the country. The event is supported by Asian table mammoth Yalin Billiards, advanced cue engineer OB Cues, long lasting Championship Tour Edition Cloth, top playing Aramith Balls, Tour Edition Chalk,  and #1 TV network broadcaster ABS-CBN. Star Billiards and Pool & Billiard Magazine are also proud supporters. This year’s edition will take place August 20th-24th once again at Robinson’s Galleria Mall, which has now become synonymous for creating the dynamic atmosphere of the coveted championship. Robinson’s Galleria is connected to the host hotel Crowne Plaza Galleria. With massive media and global networks covering the Yalin Women’s World 10-Ball Championship, it will continue as still the biggest and most watched women’s billiard event in the world. 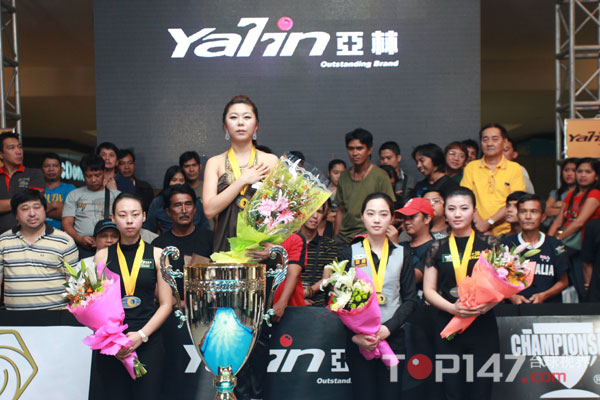 In the semi-finals, China #1 Xiaofang Fu faced off with 19 year old Siming Chen for a spot into the finals. Neither had ever reached this far into this event. It was a tightly contested match, with Chen leading by 1 game margins throughout. But it was Fu’s fatal scratch on the 7-Ball in game 14 where she had a chance to tie the match at 7. Instead Chen was given a sigh of relief and was able to close the rest of the match out at 9-6.
The bottom bracket featured an all Korea semi-final between Korea’s #1 and #2 women with Ga Young Kim and Yu Ram Cha. The match was epic. Both women played superb with non-stop exciting jumps, kicks, powerful break shots, and awesome offensive firepower.

“This match is equal to watching two top pro men playing at a high level”,said world men’s champion Thorsten Hohmann who was commentating on the live TV match.

“Both ladies are playing at a high level. Neither wants to lose and both have a steely look of determination on their face. The shots they are making are incredible!”, exclaimed Charlie Williams during the match.

Kim took the first game, but Cha came back with the next runout. Kim played a good safe in the 3rd game, but Cha called the 2-Ball in the corner pocket and made a fantastic kick shot and ran out the rest of the rack. Leading 3-1, Cha gave Kim a slim opportunity which Ga Young fully took and came back to level the score at 3-3. Cha made one costly error going for a 10-Ball combination instead of opting for a runout. She missed the combo and the tide turned again. Kim took the lead and at 5-4, Cha was able to break again and this time smacked a powerful break sending the cueball high in the air and landing perfectly in the center of the table. Pocketing a ball as well, the rack looked good for a runout to tie the match. But then the 3-Ball went 3 rails around the table and like an unlucky heat guided missile, hit the cueball perfectly to send it 3 feet away into the corner pocket. Kim ran out. Cha’s next opportunity was off a safety , where Ga Young faced a jump shot with only 3 inches between her and the 1-Ball. Kim made an amazing jump just to hit the ball, and left Cha a length of the table shot on the 1-Ball, but with the cueball frozen to the 8-ball where she could only hit the top side of the white. Cha jacked up and speared the 1-ball in perfectly and made a tough cutshot next with a bridge and ran out! But a dry break next would be it for Cha. Kim was determined to get to the finals by 1% more than Cha, and she ran out and broke and ran the last rack.

“The final score of 9-5 is not even close to showing how great and tight that match really was”, commented Yahoo Sports writer Bob Guerrero.

In the final match, China would face South Korea. China has had an army of strong top notch players, and Korea has produced perhaps not quite as many in quantity, but makes up for it in quality with gems such as Ga Young Kim, Yu Ram Cha, Yun Mi Lim, and Eun Ji Park.

Kim vs Chen
vs

The finals began with Kim continuing her lightning fast pace from her last match. She took the first 3 games in a blink of an eye. In about 15 minutes, she already commanded a 4-1 lead. Chen seemed overcome with the blitz of Kim and was never really able to shake her off. Chen pocketed some nice shots, but wasn’t able to control her cueball well. Kim on the other hand, looked to be in supreme confidence at the table coming with every challenging shot and executing intricate safeties and positional play.

Leading eventually at 9-3, Chen was given another chance off a Kim safety. Chen made a nice carom shot off the 3-Ball sending the cueball down table off the short cushion and neatly hit the 10-Ball perfectly where she called , and pocketed it. Score was now 9-4 and the crowd cheered wildly hoping for a tighter contest. Chen then broke and ran the next making the audience hopeful for a comeback. But it was not to be, Chen made a positional error in the next rack and was forced to kick the 6-Ball. The effort was half hearted as the disappointment was apparent on her face from the earlier mistake. Kim faced the final 4 balls that stood in her way, and pocketed the first 3. As the cueball landed perfectly for the final 10-Ball shot, Kim showed her first emotion in the whole event by looking up to the sky, as if to say, this is what I’ve been fighting for the whole week. She pocketed the final shot and clenched her fist in the air in victory!

Thousands of people attended the event, and lined up by hundreds for autographs with the stars of the World 10-Ball

“I have improved my result from last year, so I am happy about that. I am getting closer”, said Chen in the finalists speech.

“I really did not practice any more than usual for the event, but I was doing a “Dancing with the Stars” TV show in Korea leading up to the World Championship, and so I was really in a happy mood. So I think my happiness and positiveness carried over to here this week”, explained Kim when asked if she did anything differently this year to prepare.

Ga Young Kim will enjoy a full year of reigning in women’s pool most highest challenge and honor, as the World Champion of 10-Ball.