BI-G THING IN A SMALL PACKAGE

BI-G THING IN A SMALL PACKAGE
BI ZHU QING IS THE SURPRISE WINNER OF THE 2011 WOMEN’S WORLD 9-BALL CHAMPIONSHIP WITH A 9-7 WIN OVER CHEN SIMING.
BY TED LERNER 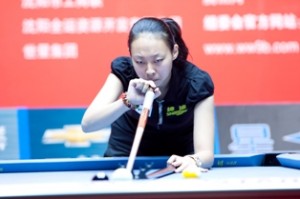 That all changed on the last day of the Women’s World 9-Ball Championship in this northeastern city of 7 million people. After she quietly worked her way through the field at the Liaoning Hunnan Sports Training Arena beginning Thursday, Bi shocked defending champion and world number one Fu Xiaofang in Sunday’s semi-final, 9-6.  Playing the role of underdog perfectly, Bi played seemingly without a care in the world, while the pressure of stardom and expectation appeared at times to get to Fu.

Bi’s finals match against Chen later in the evening, played in front of over 1200 people, didn’t go quite as smoothly as the semi-final against Fu, and she could have very nearly lost. But Bi freewheeled long enough to build up a decent cushion and held on down the nervy stretch to cross the finish line first.

For Chen the loss was a major disappointment, but like Fu earlier, the mantle of expectation seemed to weigh heavily on her shoulders. The 17 year old pool prodigy has won three big tournaments in the last year and a half, including a gold medal in snooker in the Asian games.  As a result she has built up a major following and entered the finals a heavy favorite to capture the crown.  Chen, though, spent most of the middle part of the match looking uncomfortable and slightly out of sorts, as her deadly accuracy failed her on several occasions.  Chen made a great fight back at the end, but it was too little too late.

An anxious Chen had barely escaped against Han Yu in the second semi-final, but at the beginning of the race to 9, alternate break final she looked like she had shrugged off any of those previous anxieties as she quickly moved up 3-0. But then the cracks returned to Chen’s famously solid game, while at the same time Bi settled back in underdog mode and started relaxing as she had against Fu.

Up 3-1, Chen snookered herself and handed the table to Bi, who eventually cleared. In the next rack Chen missed a cut on the three, and Bi pounced and tied the match.

Bi continued her fine rhythm in rack seven while Chen kept sliding downhill. Bi played a lock down safety and forced Chen into a foul. With ball in hand Bi quickly went up 4-3. After a mandatory break, Chen sank the one on the break, but then missed a very makeable 2-ball. Bi stepped up and mowed down the colors for a two rack lead. In the next rack Bi kept Chen in her chair and nailed a 4-9 combo to make it six straight racks and a 6-3 lead.

Chen settled down with a break and run in rack 10. In the next frame, though, Chen got unlucky when she scratched while attempting a jump shot and fell behind 7-4. Chen then dug in for a big time fight back as she broke and ran rack 12, then won a safety battle in rack 13 and cleared to move within one at 7-6.

Chen looked like she was about to tie the proceedings but she suffered an unlucky scratch which allowed Bi to move to the hill and one away from the title. Rack 15 was filled with tension and drama as the two couldn’t break up an 8-9 cluster. Finally Chen showed her mettle by forcing Bi to foul.  It was now 8-7 in favor of Bi, but with Chen breaking next, it was anyone’s final.

For Chen, though, it was not to be. She got to the table and tried to draw the cue back full table for a sure 2-9 combination. The cue didn’t cooperate as it traveled too far and into the corner pocket. Bi then nailed the 2-9 for an unlikely world championship.

“I’m very happy, very excited,” Bi said afterward as a throng of media snapped the new champion’s picture. “That’s the best I ever played. Fu and Chen are great players and to beat them both in one day makes me proud. I was more nervous during the finals than in the semi-finals but I wanted to do my best because this was my chanced to achieve my dream. So I tried to relax.”

Chen hardly seemed disappointed as she joked with Bi in the media room afterwards and posed for photos. She realized that she hadn’t played her best and, with a gracious manner typical of all the Chinese women pool players, gave full credit for the win to Bi. 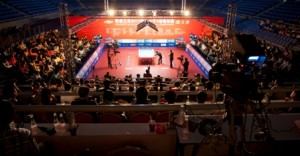 “The first three racks I played well,” Chen said. “But after that, Bi played better than me. I’m happy for her.”