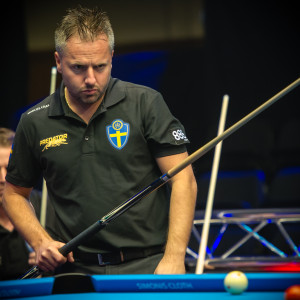 SWEDEN’S MARCUS CHAMAT, a six-time Mosconi Cup veteran, will take the helm for Team Europe when the 2015 event takes place at the Tropicana in Las Vegas in December. The 39 year-old Swede was the life and soul of the team when Europe won for only the second time in 2002 and has an overall record of 11 victories from 26 Mosconi Cup matches played .

Chamat, who carries the nickname ‘Napoleon’, takes over the job from Johan Ruijsink who retired from the position undefeated through seven Mosconi Cups.

“It will be tough to follow in the footsteps of Johan and all that he did with the European team, but to be the captain of the best team in the world is really a great opportunity for anyone,” said Chamat.

“I’m really overwhelmed as it’s a dream for anyone to be involved in this event as a player or coach. My heart always beats hard when it’s the Mosconi Cup going back to the very first time I played in 2000.”

The 2015 PartyPoker Mosconi Cup takes place from Monday December 7 to Thursday December 10, the Europe v USA showdown is hosted for the first time at the Tropicana in Las Vegas.

Chamat added, “Now I get an opportunity to coach a great European team in Las Vegas and take on the Americans. I’m sure we will come prepared but I know that they will do and try anything to change the scenario of the last few years.”

Chamat, who turned professional in 1999, has enjoyed a successful career that has seen him win both in Europe and the USA. He was ranked as high as No.1 in the world in 2005 and has twice won bronze medals at WPA World Championships. Chamat still competes occasionally at the top level and he recently finished ninth at the WPA World 10 Ball in the Philippines.

He is also co-owner of the highly successful Interpool Club in Gavle, Sweden, where he leads a work force of some 20 people.

“I know my team will go to Vegas as favourites, but I know that doesn’t mean anything. I’ve played in enough Mosconi Cups to know that it could change at any time.

“This will of course be a huge challenge, especially after what Johan has achieved but I’ve known all the players for years they know me. We have to come together as a team and then it will be real hard for the Americans to beat us.

“I was in Vegas as a spectator for the 2013 Mosconi, and the way our team played there was probably the best I’ve ever seen. I’m going to celebrate this great news a little and then I’m going to focus on this job and get to work!”

The 2015 PARTYPOKER MOSCONI CUP is sponsored by PartyPoker, the world’s leading online poker site. The Official Table of the Mosconi Cup is supplied by Diamond Billiards, the cloth is supplied by Iwan Simonis and the Official Balls are Super Aramith by Saluc.

Ten Facts about the Mosconi Cup

1.  Played out annually each December, the MC debuted in 1994.
2. Despite recent dominance, the Europeans still trail the USA overall by 9-11.
3. Since the early 2000’s, the event is played on an annual home-and-away basis.
4. There are a maximum 21 matches during the Mosconi Cup. The first team to reach 11 carries off the famous trophy.
5. With a potential of 20 hours broadcast time, every shot of every rack is shown live.
6. The name of the game in 9 ball, whereby the player who pockets the final ball wins the rack.
7. Over the 21 years of the event, 72 different players have taken part. 38 have represented the USA and 34 have played for Europe.
8.  To date the MC has taken place in ten different venues; the Tropicana will be the 11th.
9. Both sides are made up of the very best players from both continents with three from the annual rankings and two captain’s wildcards.
10. The event is named after the legendary Willie Mosconi, arguably the greatest of them all.