Qualifiication Rounds Over in Fujairah.

Some big names have left for the exits in Fujairah. World 9-Ball Champion Francisco Bustamante was ahead of Daryl Peach 6-4 in the race to seven games and lost that match 7-6. He then had to defeat David Alcaide of Spain to stay alive but failed as Alcaide prevailed 7-3 to send Francisco home. Another much-feared Filipino, Jeff De Luna, has also seen his efforts come to naught after he was surprised by Khaled Al Mutairi of Kuwait 7-5 and then lost 7-6 to Takhti Zarekani of Iran 7-6.

Corey Deuel of the USA lost his frst-round match to Jalal Yousef of Jordan, then faced a super-tough Raj Hundal of India in a match where Hundal seemed never out of control. Deuel fell 7-5 to allow Hundal to advance to the final round. Vincent Facquet of France is having a good tournament. Undefeated in the group stages, he had to play a race to three tiebreaker against Nguyen Phuc Long of VIet Nam to determine which of them would get the final first-round bye in the last round of 64. He won that 3-2 and went back to his hotel to sleep peacefully and await the next challenge. Earl Strickland is yet to break a sweat. The multi-time World Champion won his two group matches easily (7-5 over Sumit Talwar and 7-4 over Erik Hjorliefson). As luck would have it, the draw for the round of 64 finds Strickland playing Erik Hjorliefson once again in the very first match-up of the final round. The final round is single-elimination, so any loss will eject that player from the event. Former World Champions Thorsten Hohmann and Mika Immonen have both survived the group stages and are playing very well. Hohmann defeated Russian superstar Ruslan Chinakhov 7-4 and Darren Appleton stepped on Radoslaw Babica in the same way.

Roberto Gomez of the Philippines and Naoyuki Oi of Japan both enjoyed impressive group-stage wins today as Oi defeated Shane Van Boening 7-4 and Oi nipped Ralf Souquet 7-6 to gain his seed in the final round. Defending Champion Karl Boyes of Great Britain has barely stretched his legs as yet. He won his two matches 7-0 and 7-4 and seems as relaxed as a kid on the beach. This performance earned him a bye in the first round of the finals so he is already into the round of 32 and his level of confidence seems enough to carry him through all on its own. Rodney Morris barely missed a bye himself with wins of 7-3 and 7-5 but he is also in great spirits and seems to be one of the immovable objects in the room.

Our number one seed and the man with the best performance thus far is Antonio Lining of the Philippines. He suffered only three lost games in two matches as he swept Joyme Vincente 7-0 and then cruised on past Jepthant Palencia 7-2. He, of course, also earned a bye into the round of 32. Oliver Ortmann did not earn a bye but he earned some bragging rights as he dismantled two-time US Open and World 9-Ball and World 10-Ball Champion Mika Immonen 7-2 in their match. Mika won his clutch third match so both men are in the final rounds.

Only eight matches of the final round were played but the first result shocked the many Efren Reyes fans in attendance. They sat stunned as Joven Alba controlled him and finally eliminated Reyes 9-4. Another big upset followed a few minutes later when Alok Kumar of India defeat Kuo Po-Cheng 9-4. As if that were not enough World Champs to fall. Takhti Zarekani of Iran knocked Thorsten Hohmann out 9-8 after Hohmann had opened an early 5-1 lead. The rest of the round found Oliver Ortmann besting Mohammed Abdulmosen Alhazmi 9-2, Carlo Dalmatin defeating Yukio Akakariyama 9-7, Ronnie Alcano ruining the day for Shaker Wahdan 9-2 and Huidje See slipping past Marcus Chamat 9-7. Finally, Shane Van Boening progressed 9-7 over Nguyen Phuc Long 9-7. Play begins Thursday at 1 PM UAE time. 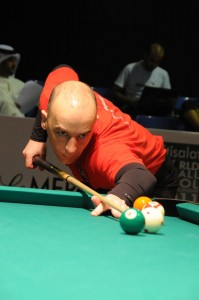