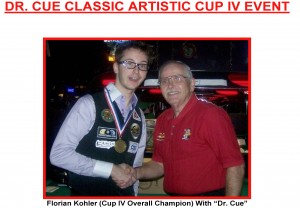 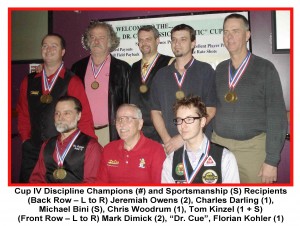 This special event of the Dr. Cue Classic Artistic Pool “Sport & Show” Tour showcased some of the greatest pro players under the WPA / APTSA sport umbrella. In addition, top amateur players from several league tour stops held in 2010 at respective National and / or International events of the BCAPL, VNEA, ACS, and APA, plus several “at large” entries participated.

Pros and amateurs played side by side in special 3 person – player groupings with 7-foot tables and high percentage make rate shots creating an equalizer effect for all competitors.  Over $10,000 in guaranteed payout values and a rather large player / audience prize fund produced player and fan friendly opportunities in a reunion style billiard atmosphere.

In addition to the Cup IV event, the inaugural Dr. Cue National “Artistic” Lag Championship Finals took place after over 10,000 lags had been documented in junior, league, and other billiard venues since early 2010.  Dozens of players and fans alike took part in this simple, yet very challenging and final contest of consistency and mental focus.  Tom “Too Kool” Kinzel from PA remained very “Kool” on his journey to becoming the event champion “title” holder, while winning a guaranteed $1000 and special plaque award in the process.

Note: Jen Sweatt (IL), who played in this event, also participated in a special “mini” lag event held prior to the championship finals and won $130 for her 1st place finish. 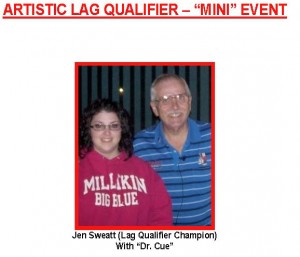 A special feature accented the 3 days of festivities when a unique presentation was made to Rick “The Barber” Hawkinson from IN as the 2010 Cue-Dean-“E” Honoree.  A large group of sport fans, room attendees, and fellow players witnessed the emotional moment, as Rick was presented with an engraved McDermott “Table Trotter” Cue and Case, plus a custom Cue-Dean-“E” plaque.  These awards were given to signify his “E”ntertainment, “E”ducation, and “E”nergetic talents, plus his “E”nlightening “spirit gift” to the magnetic world of “artistic pool” and beyond.

Special Note: Jason “The Michigan Kid” Lynch did a live stream for the events, presenting “artistic pool” at its finest and much more to Internet viewers around the world.  Thank you, Jason!! 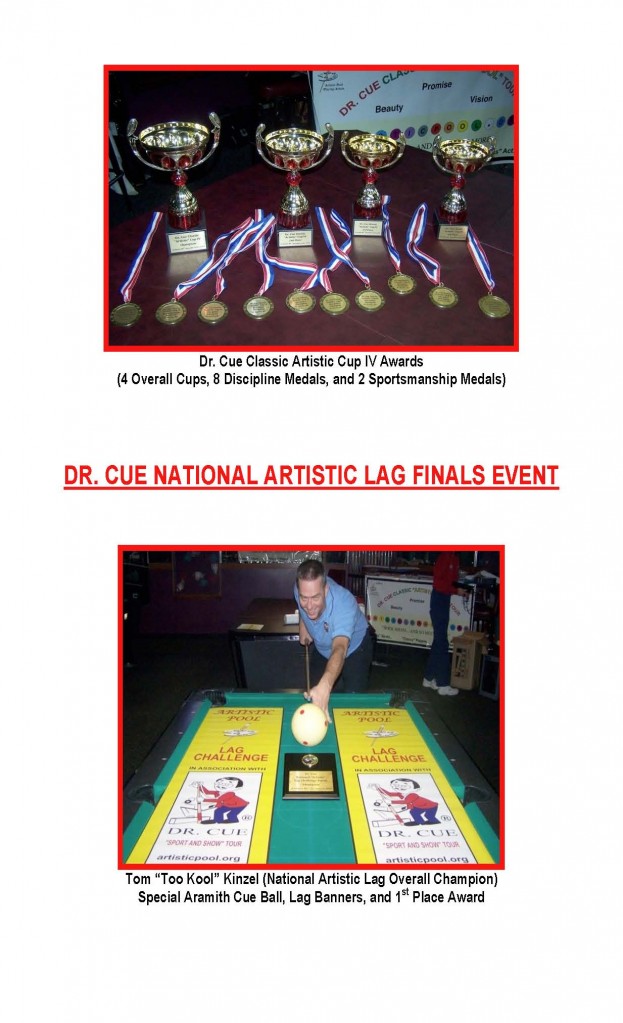 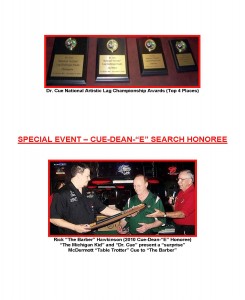 Below is a brief recap of the top 4 positions of finish for the “Artistic” Cup IV:

Below is a brief recap of the top 4 positions of finish for the “Artistic” Lag Finals: