WIN A PIECE OF THE LEGEND

GREEN BAY, Wisc, July 12 – January 12th, 2008 marked the infamous playoff game in which Matt Hasselbeck, former backup to Brett Favre, proclaimed his Seahawks would receive the ball in overtime, and win the game. The Packers went on to win that game with an interception returned for a touchdown by Al Harris. Although Favre had a large hand in that victory, he may have made an even larger impact the night before. 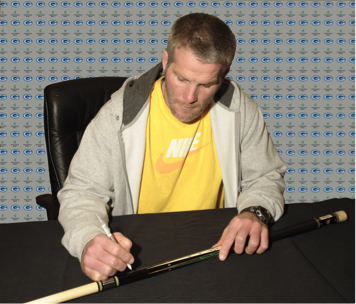 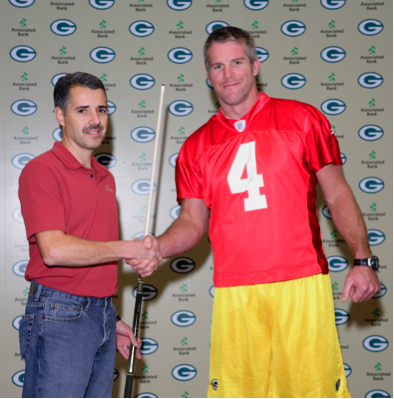 On the eve of the Packers-Seahawks playoff showdown, Favre met with local business owner and Green Bay native, Joe Pechauer. Pechauer is the President and owner of J. Pechauer Custom Cues and Quality Billiards, a small family business serving the Green Bay area and billiards players worldwide for the last 53 years. The prior year, Pechauer had an idea to team up with Favre to raise money for a good cause. Pechauer designed and created a commemorative Favre pool cue that highlighted the star’s career. This time, Favre’s signature would join Pechauer’s on the 25 cues, a unique finishing touch used to identify a J. Pechauer product.

The cue featured designs and inlays noting “The Game of His Life” against the Oakland Raiders after his father’s passing, his Superbowl win in 1996, MVP nods in ’95, ’96, and ’97, and (at the time) his claim as the All-time Passing Touchdown leader. These 25 cues and Brett Favre helped donate more than $40,000 to charities to date, such as Big Brother Big Sister, The Giving Tree, Breast Cancer, and many others.

Unfortunately, the timing of these pool cues was rather peculiar, as Favre’s last season with the Packers was the 2007-2008 season.  But now, the bitter taste of Brett Favre’s departure is gone, the years of celebrating his illustrious career have begun, and his Hall of Fame induction is just around the corner. There are still three pool cues left to raise money for charity. Pechauer would like to donate the proceeds to the Favre 4 Hope Foundation and the Alzheimer’s Foundation of America.

“As a family business in a small town, we wanted to do something to highlight one of the greatest legends this city will ever see. We are hoping to send Favre to the Hall of Fame with a donation to his accredited foundation to show thanks for all he has done for our community and the world of sports,” Pechauer said.

More information about the Favre 4 Hope Foundation can be found at www.favre4hope.com/.

More information about the Alzheimer’s Foundation of America can be found at www.alzfdn.org/.