Several months ago Steve Lillis, founder of Gospel Trick Shot Ministries, referred me to Maged Fawzy, leader of KDEC Sports Ministry, which has a very special outreach around Egypt and the Middle East.  Maged asked me if I could attend a family / youth sports festival at a retreat center in Beit el Wadi, Egypt (about 1.5 hours north of Cairo).  He wanted me to perform several shows and share my billiard journey / personal testimony with the attendees.  The “Wadi Experience”, as I now call it, had an amazing impact on my understanding of open eyes, open ears, open minds, and open hearts and the special needs that take residence in them.  What happened in Wadi is hard to explain in words!  Following is my account of this special journey! 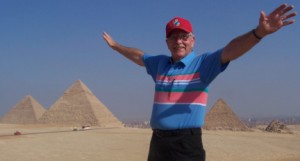 Arrived at Cairo Airport after a 10+-hour flight from JFK.   Outside temperature was 75 degrees below zero over North Atlantic but a comfortable 75 degrees above zero greeted me on the ground in Egypt.  This was the first time I experienced a 150 swing in temperatures from low to high!!  A gentleman next to me on plane was retired and wanted to do 3 things now – 1) spend time with his grandchildren more, 2) get his body in shape, and 3) study world religions.   I just happened to have a book entitled Christianity and World Religions by Hamilton in my carry on (that’s another story).  Our “surprise” meeting / discussion continued until touchdown.  Amazing trip confirmation!

Left airport for Wadi in a caravan of vans with several other performers that had arrived from around the world.  We traveled a modern day interstate highway (under construction of course), but eventually found our way to a winding and bumpy road heading to what appeared nowhere!   I wondered if the driver had gotten lost, but then we arrived at an “oasis in the desert”, so to speak!  We entered the walled Wadi Compound and checked into our dorm style lodging accommodations.  The modern amenities of this place were due in main part to a self-sustained multi-generator and water works system built several years ago.  A central high tower would also provide cell phone service and internet access.   Performers, staff, and evangelistic team members enjoyed an evening dinner together at the hotel with follow up preparation for the first day of the festival. 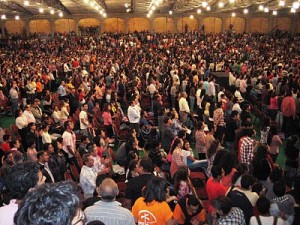 Wow!  Wow!  Wow!  The transformation of the compound grounds to a city of people began early.   An estimated 10,000 visitors today!!

This KDEC Sports Ministry festival and special outreach has provided a conduit for sharing the Good News via various performer testimonies / performances and worship services during the 3 day event for not only a large youth contingent but also their families being bussed up from Cairo. In addition, many people have driven their private vehicles.  Millions of people in Northern Africa and The Middle East in general are also receiving the same outreach messages via TV favor and cooperation with video taped segments of the various performers.

I did 3 shows today with several hundred people watching and “enjoying the roll” at each one.  At the end of each show prayers of hope and peace were given to all.  The largest building was called the Stadium with seating capacity for over 8000 people.  Additional “outdoor desert” seating was put in place to accommodate the large number of festival attendees.  Throughout the day singers, pastors, and worship team members took residence in this magnetic building with festival attendees relaxing, enjoying the music, and listening to words of faith, hope, and love. 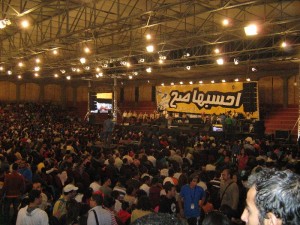 A vast “sea of people” once again traveled to this desert country north of Cairo today.   It is absolutely amazing what is going on here as God is doing miraculous things to gather in a great harvest with significant Middle East exposure via TV favor to millions of people.

The beauty of the Arabic language spoken here with translators provided for English conversion at each “station” of show or demonstration, helping performer and onlooker alike create a special friendship relationship and understanding of how the Good News can make a special difference in a person’s life and personal journey.

The service ended with hundreds of people accepting Jesus Christ as their personal Lord and Savior and many receiving prayer for healing of mind, body, and heart.

Another “AMAZING” day!!  Today the message of Jesus Christ rang across the compound area here in Wadi at each performer station (as they are called) and in the Stadium arena where thousands of people experienced the evening worship service for 2 hours.  Tonight a rough count from our performer / staff viewpoint high in the arena revealed a multitude of people making the decision to accept Jesus Christ as their personal Lord and Savior.   God’s protection kept us safe during the 3 days.

In the billiard station I was in for 3 days we did 9 shows, several challenge matches, and special “around the table” expressions on how to “enjoy the roll”.  Most of the time was spent in sharing the love of Christ to those present via the artistic gifts and talents God has blessed me with on the pool table.   I felt the Holy Spirit working to that end.   At the end of each show, prayers were done for those present as a group and then individually as needed for healing of mind, body, and heart needs.  Several people gave their heart to the Lord during these special moments.

I encourage each of you to add Egypt and KDEC Sports Ministry to your prayers, as God is doing a miraculous work to bring the salvation message to its people.

The people here are a great people and I hope to come back to share the love of Christ again and again.   The central theme of the festival was “right choices” (rough translation from Arabic). 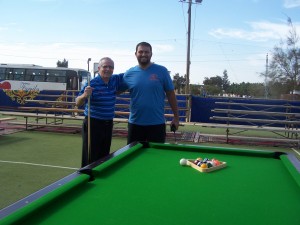 I took a final walk around the compound early this morning (21st) trying to fathom what had taken place over the last 3 days – memories to last a lifetime!!  I then left with a group of 9 other performers for Cairo for a day of sightseeing and our flights home.   We made a visit to the Great Pyramid and several others, plus the Sphinx and surrounding temple grounds.   We went inside one of the pyramids and rode a camel after that – now, that’s an experience I will never forget!!

We then rode throughout the city of Cairo with its population base of 20,000,000+ people, thousands upon thousands of honking horns, and a myriad of unique “Lego-style” buildings.  We crossed the beautiful Nile River and entered a mountainous section on the Eastern side of the city, which is actually called Garbage City.  Even though tens of thousands of people live in this unimaginable place on Earth, an unspeakable joy on the faces of the people that reside there is in large part due to their Christian faith and special access to one of the most unique churches anywhere in the world called the Cave Church on the “backside” of Garbage City.  This home of Christian worship outside of Cairo proper accommodates over 10,000 people that sit on padded stone seating amidst special scenes from the Bible carved with artistic beauty on the surrounding mountain walls.  Cave Church provides daily hope in an otherwise cold and bleak environment just blocks away – absolutely amazing!!

We headed back to our evening accommodation on the Nile River called the Shepheard’s Hotel, on the site once occupied by Napoleon’s head quarters.   Before settling in for the night we attended a downtown Christian church for a final fellowship service and special time of sharing with many of Cairo’s city residents.

Leaving the Cairo Airport at 4:00AM on November 22nd for Amsterdam came very quickly.  I landed back in Indianapolis via Detroit to meet “Ms. Cue” right on schedule.   What a journey!!