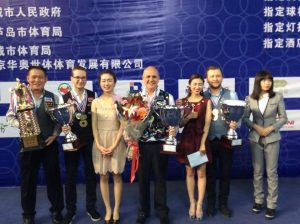 Luke Szywala from Krakow, Poland played Florian Kohler from France, in the semifinals winning 90-88. Sebastian Giumelli from Argentina came thru the preliminary rounds with the highest score at 270 points and moved into the playoff rounds, defeating Charlie Darling 45-29 with both players getting off to a slow start. Sebastian continued his winning way defeating Wang Mengan 82-72 and Chi-Ming Lin 103-79, until finally claiming the overall”championship victory” in a close match in the finals with Luke Szywala 72-65. 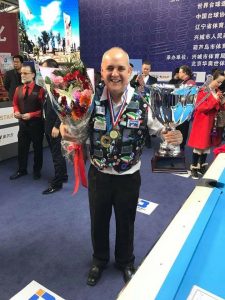 The individual Discipline WPA World Champions were: Florian Kohler with 4 titles: Trick and Fancy 40 /40 points, Special Arts 39/40 points, Jump 40/40 points, and Masse 38/40 points; Sebastian Giumelli with 2 titles: Follow 39/40 points, Bank/Kick 38/40 points; Luke Szywalawinning Stroke with 39/40 points; and Jason Lynch victorious in Draw with 39/40 points.
Wang Mengnan was the recipient of both the Sportsmanship Award and the Rising Star Award.
I would like to thank the sponsors that made this event possible: WPA, WPA Artistic Pool Division, Xingcheng Rural Commercial Bank, CBSA, WPPA, Star Billiard Tables, LEQI Billiard Cloth, CYCLOP Balls, Dr. Cue Promotions, plus the Chinese table judges and translators, the supporting staff, and all of the players involved.
A “big” congratulations to Sebastian Giumelli for his outstanding performance and earning the prestigious 2017 WPA World Artistic Pool Championship Title!
On behalf of the WPA APD, We would like to thank all of the players for their continued support and recognition of the 2017 WPA World Artistic Pool Championship as the only officially recognized championship for Artistic Pool under the WPA umbrella. We look forward to more championships in the near future.
Mark Dimick, President  WPA Artistic Pool Division 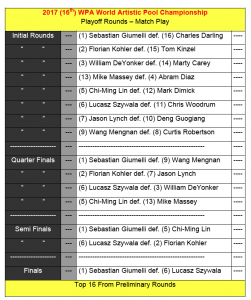 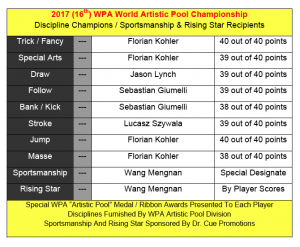