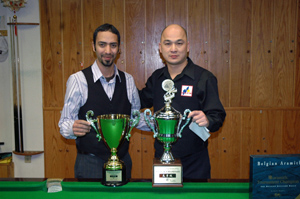 The tour stop drew a 14-player field over the weekend of February 27-28.  On Saturday, four round-robin preliminary flights determined the eight quarterfinalists (top 2 from each flight) to return for Sunday’s final rounds.  The preliminary flights featured 2-frame matches among each opponent within a flight.

*Carbin and Kavacs placement based on best point differential

Fung (Brooklyn, NY) had an untroubled path toward the final as he won Group A without the loss of a single frame, and then proceeded to gain a 3-0 quarterfinal win over Group C runner-up, Laszlo Kavacs (Queens, NY), and compiled a top run of 61 in taking out his semifinal opponent, Kyle Sim (Brooklyn, NY), who won Group D, by a 4-1 score line.

Ali (Brooklyn, NY) was victorious in Group B as he claimed top spot undefeated without the loss of a frame too, and he comfortably produced a 3-0 quarterfinal success over Kashif Rashid (Queens, NY), who gained runner-up position in Group A, before then booking his final berth with the tour event’s highest break of 75 during his 4-2 semifinal win over Group C winner, Paul Carbin (Queens, NY).

[Numbers indicate frame scores per match in final rounds, with any notable high run in parentheses]

In what was a repeat of last year’s semifinal of the United States National Snooker Championship at the same venue, Fung gained revenge for his comprehensive loss to Ali; however the match did go down to the final colored balls in the final frame.  Ali gained the early initiative by taking an early 2-0 advantage in the final assisted by respective runs of 34 and 67, but Fung’s own break of 67 in frame three reduced his arrears to 2-1.
Fung then got back on level terms as he decisively claimed the fourth frame, and then forged 3-2 ahead as he sealed the following frame by pocketing a re-spotted black ball.

Ali however would not go down without a tremendous battle on the green baize, and he insured the match would be settled by a final frame shoot-out, as he compiled a break of 40 which helped him nail frame six.
Fung was to hold his in that final frame as he took the title on the final colored balls, which will give him much confidence as he prepares his game for his National Championship challenge to Ali later in the year.

The USSA National Snooker Tour is sponsored by Aramith Billiard Balls and Strachan West Of  England snooker cloth, and the 2010 Tour will feature its third stop (of the six-stop Tour) at California Billiard Club in Mountain View, CA, during the dates of March 13-14 (contact Bob Jewett at 408-615-7479).  Full Tour schedule and entry details are available at www.snookerusa.com.