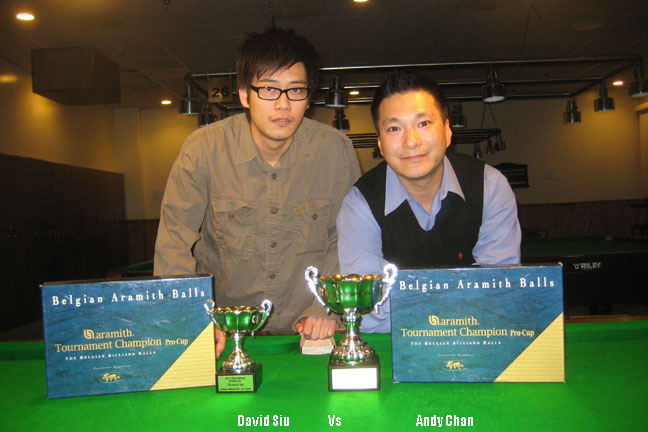 The United States Snooker Association (USSA) initiated its 2nd Annual USSA National Snooker Tour with the first stop on the Tour at Embassy Billiards Club – directed by USSA director Richard Ham – in San Gabriel, CA, February 16-19. The event enjoyed a 12-player field. A handicap format was adopted for this Tour Event played as a single-elimination knockout competition, which featured the winner of last year’s Tour Event at the Embassy Billiards Club, Mei Yi Fei. Yi Fei had the lowest handicap at -45, indicating that he was the favorite for the event. A former United States National Snooker Champion also in the competition, Paul Kimura, had a handicap of -23.

However, in this event David Siu with a handicap of 15 throughout the event took the best advantage of the spot throughout the competition, gaining the Tour stop finals where he faced Andy Chan who was also on a handicap of 15. Both players started each frame with level point scores, and Siu had a comfortable run to victory, as he went on to claim a 3-0 success.

Previously Siu started with a 20-point advantage each frame during his 3-1 semifinal win over Harry Kon, and also scored an excellent 3-0 quarterfinal defeat of Kimura who was yielding 38 points per frame.

Andy Chan played Yi Fei Mei in the semifinals, with the defending champion giving away a huge 60 points per frame which ultimately proved too much even for a player of his ability, and Chan came through a 3-0 winner.

Chan also competed against one of the Embassy Billiards Club’s top players in the quarterfinals, as he received a 40-point advantage each frame from Sim Lim, and Chan secured a 3-1 victory.

The USSA National Snooker Tour is sponsored by Aramith Billiard Balls and Strachan West Of England snooker cloth, and the 2010 Tour will feature its second stop (of the six-stop Tour) at Prince Snooker Club in Brooklyn, NY during the dates of February 27-28 (contact Raymond Fung at 917 923-5118 / rayfung196956@yahoo.com). Full Tour schedule and entry details are available at www.snookerusa.com.

The USAA National Snooker Tour is sanctioned and produced by the United States Snooker Association (USSA) [established in 1991], which is recognized as the USA governing body for snooker by the world-governing body – the International Billiard & Snooker Federation (IBSF) – and which produces the annual USA National Snooker Championships to determine the representatives from the USA to the annual IBSF World Snooker Championships.