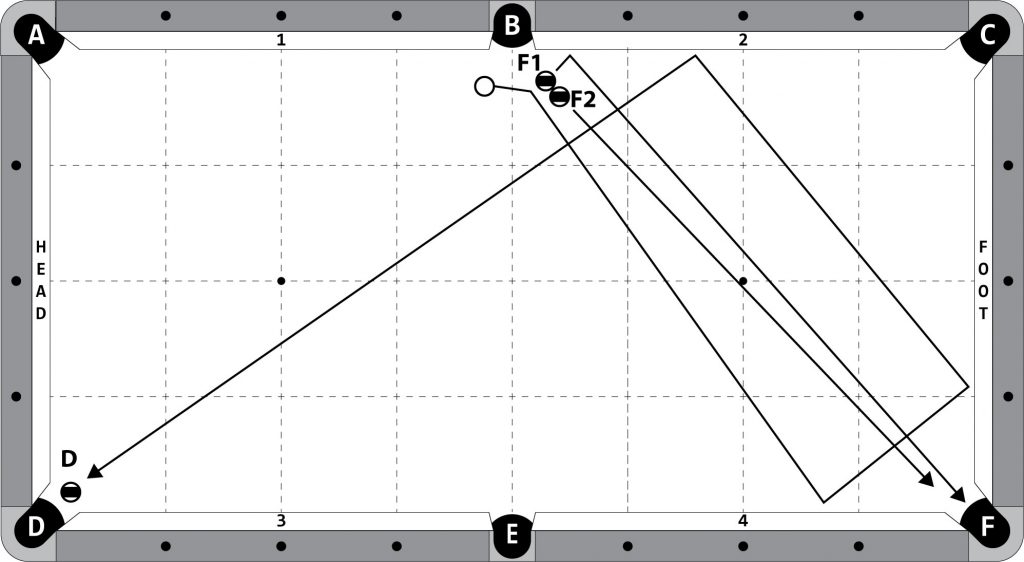 The Purse Snatcher is a classic set up shot that can get infuriating when you try it on an unfamiliar table. It was once in the Artistic Pool shot program but has been removed for so long that some of the younger, aspiring trick shot artists wouldn’t even know where to begin. The objective is to bank the F1 ball in (the snatcher) before the F2 ball (the purse owner) and have the cue ball travel three cushions for the D ball. NOW YOU CAN SEE THE ACTUAL SHOT BY CLICKING ON LINK BELOW.

I start with the F1 ball placing it a ball width out from cushion 2 with its edge even with the side pocket point. Freeze F2 ball to it aligned towards the cushion 4 point of pocket F to allow for throw. I place the CB two ball widths from the F1 ball and then move it about 3/8 ball further from the cushion. I aim for a 1/4 ball hit on the F1 ball with about a half tip of follow and 1 tip left. I hit it pretty hard too since the F2 ball usually slow rolls into the pocket.

You can slide the whole setup up and down the rail to adjust for the bank. You won’t have to move it too much since you’re also altering the tangent line between the F1 and F2 balls. If you change your aim or spin, that will affect the bank angle as well. Hitting F1 thicker will bank it longer.

Click on link to see the shot in action