CueSports International (CSI) and Predator Group are excited to announce that the 2022 US Pro Billiard Series will feature nearly a half million dollars in added prize money and a total prize fund of approximately $775,000, representing more than a 300% increase in added money over the inaugural 2021 season. All six events will have more than $52,000 added each, upgrading them all to World Pool-Billiard Association (WPA) Category 3 sanctioned events which secures the exclusive dates on the WPA calendar and allows players to earn more WPA ranking points from each event. The 2022 season will culminate with the 2023 Predator World 10-Ball Championship, boasting a quarter-million-dollar prize fund, held as part of the CueSports International Expo in Las Vegas, February 22 – March 4, 2023. 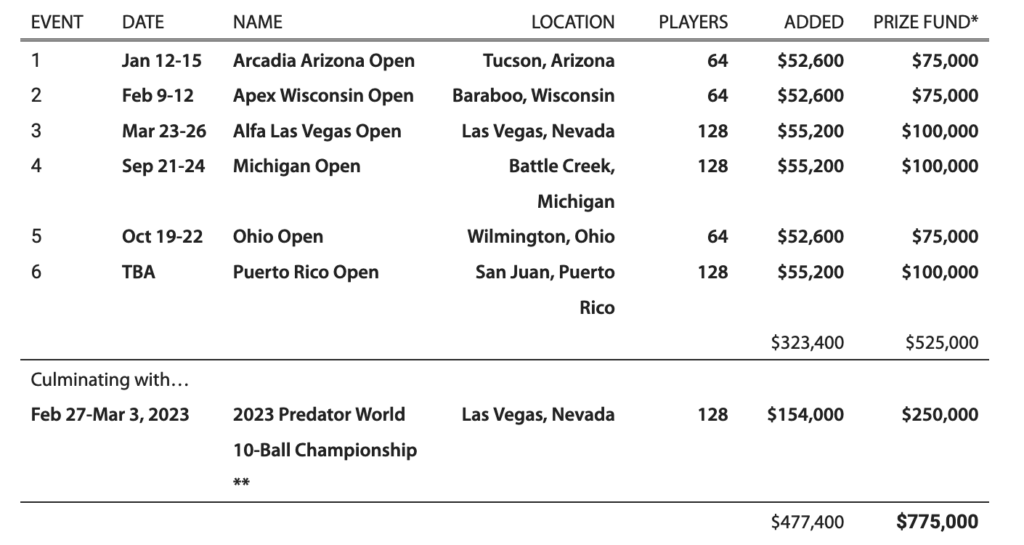 ** This is a WPA-sanctioned World Championship. Players must qualify through the US Pro Billiard Series, be invited directly by the World Pool-Billiard Association (WPA) or be invited by a WPA continental federation.

How were we able to triple the added money in just the second season? The unique format, two sets, race to four each plus a shootout if the set score is tied at 1-1, has created much more drama and excitement. Routine fans are watching longer and more importantly, it is attracting a broader audience. We have received many messages from people saying that their spouse began watching for the first time because the matches are faster and more dramatic. Children are telling their dads to let them know when another shootout happens. On-site spectators are crowding the tables to see who will win the final game of a set or who will crack under the pressure of the shootout. This increased excitement has led viewership numbers on Billiard TV and YouTube to rise which has attracted new sponsors. As promised from the beginning, this additional revenue is being reinvested in the Predator US Pro Billiard Series and the players’ pockets. After all, they are the stars, not the promoters.

CSI and Predator are committed to a long-term growth strategy. Our goal is to elevate and grow the entire sport, from top to bottom, leveraging the synergy between league participation, event turnout, equipment sales, increased viewership, and new sponsors.

Maximum exposure. We are not interested in selling a few on-site spectator tickets or pay-per-view packages. The product is made available to as many people around the world as possible for free via YouTube’s World Billiard TV channel, Billiard TV and For the Fans (FTF) TV networks.

Build the fan base. To better build the fan base, every event is staged alongside CSI league events with hundreds, sometimes thousands, of BCA Pool League and USA Pool League members in attendance. For the sport to grow, fans must admire the pros and pros must appreciate the fans.

A more professional game. 10-ball is featured as the “game of the pros” because it requires more skill than 9-ball. In 10-ball, shots must be intended and called, breaking requires better technique and maneuvering the cue ball for position on the next shot is often more difficult.

The most innovative ranking system. The US Pro Billiard Series ranking system is managed by FargoRate, the most trusted pool player rating system on earth. It has been designed specifically to balance overall skill level and event results. It eliminates the need for ranking committees and top players are not knocked out of contention by a single misfortune or tough draw.

Billiard associations are also seeing this increase as beneficial to the entire industry. “It is always great for our athletes and our sport when we see promoters continually raise the bar and grow their events and their prize funds.” said Shane Tyree, WPA Board Chairman and Billiard Congress of America Communications Manager. “To see what CSI and Predator have planned for 2022 and beyond with the US Pro Billiard Series is very exciting for North American professional players and cue sports enthusiasts.”

To learn more about the US Pro Billiard Series or to register, visit www.usprobilliardseries.com.

CueSports International (CSI) is an international pool league and event leader and is currently comprised of three divisions: CSI Leagues, CSI Events and CSI Media. CSI Leagues manages the BCA Pool League and USA Pool League, CSI Events produces numerous amateur and professional events around the globe and CSI Media creates live streaming and digital content. Through its vision and strategic alliances, CSI is “shaping the future of pool.” For more information about CSI or any of its divisions, visit www.playcsipool.com.

FargoRate computes pocket-billiard player ratings that rate pool players worldwide. FargoRate currently has over 19.1 million games played by nearly a quarter million players from 130 countries in its massive data set. Coupling game win/loss data across local leagues, regions, countries, and continents ensures players everywhere are rated on the same scale. Its mission is to usher in a new era for pocket billiards in which all players everywhere are interconnected and rated by objective performance. For more information about FargoRate, visit www.fargorate.com.