The only thing that could stop Albanias Eklent Kaci on the final day of the World 10-Ball Championships was to turn off the lights. 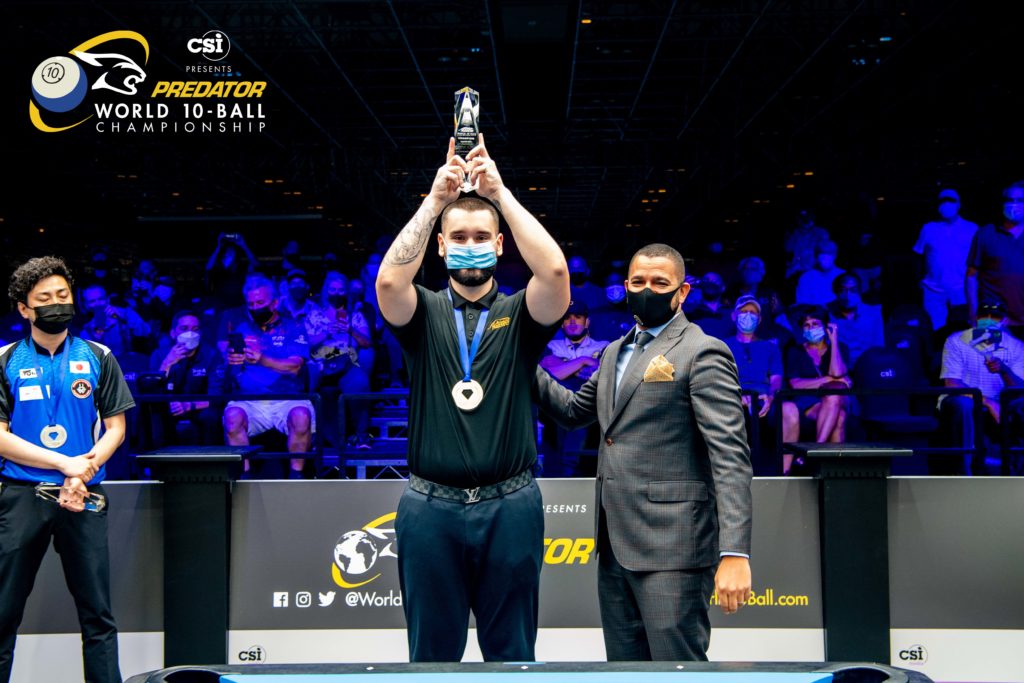 Playing in the second semifinal match of the day, Kaci had built an early 3-1 advantage against Singapores Aloysius Yapp when a thunderstorm knocked out power to the Rio All-Suites Hotel and Casino for a little over two hours. When play resumed, the 22-year-old Albanian gutted out a 10-8 victory against Yapp to earn a trip to the finals, then pulled away from Japanâs Naoyuki Oi late in the championship match to earn a 10-6 victory and win the second-annual Predator 10-Ball Championship. Kaci, who has won a handful of EuroTour events and was a runner-up at the 2017 U.S. Open 9-Ball Championship, used a combination of tight safety play and dazzling shot-making to earn the biggest prize of his career.Playing in the weather-delayed championship match, Kaci used two breaks and runs along with a dry break from Oi to build an early 4-1 advantage. Oi returned fire, just as he had done so many times throughout the tournament, taking advantage of a Kaci missed shot and dry break to tie the score 4-4, only to suffer a dry break of his own in the very next game. Kaci cleared the table to regain the lead and tacked on another rack to build a 6-4 advantage.

The charismatic competitor from Japan continued to nip at Kaci lead, using a break-and-run to pull to within 6-5. He had an opportunity to close to within 7-6 but missed a makeable 4 ball. His opponent gave him additional oxygen when he misplayed position on the 8 ball and was forced to play a safety. Oi used a perfectly executed one-rail kick to pocket the ball, but missed an equally tough cut on the 9 ball. Kaci cleared the rack, then used a table-length bank on the 1 ball to break and runout the 14th game. Oi broke-and-ran one last time to pull to within 9-6, but Kaci gutted out one last rack after a victorious safety exchange on the 1 ball, pumping his fist a couple of times in jubilation as he prepared to pocket the tournament-winning 10-ball.

Oi, who improved on his fifth-through-eighth finish at the 2019 event, earned a trip to the finals with one of the gutsiest and most persistent matches of the tournament, battling back from a 5-1 deficit against Filipino Johann Chua to pull out a 10-9 victory. The abilityto pocket balls on the break eluded him, as his first four attempts came up completely dry. Oi was able to claw out a pair o f victories to cut the lead to 6-3 thanks in large part to Chua breaking dry in the seventh rack and missing a 2 ball in the following rack. He cut the lead again with a victorious safety exchange in the 10th game, a Chua foul in the subsequent rack and tied the score with of all things  a break-and-run.

The two competitors played even down the stretch, with Oi taking the lead in the 13th game only to allow his opponent back to the table in the next game with a missed 8 ball. By now, both competitors were struggling to break racks effectively, with Chua breaking dry in the 15th  and 17th games while Oi failed to pocket a ball with his opening shot in the 16h game. Standing at the table with breaking honors in the 19th and deciding game, Chua once again failed to pocket a ball on the break. With the 1 ball nestled close to the corner pocket and the cue ball blocked by the 7 ball, Oi reached for his jump cue and popped the object ball into its destination after a push out. And with that he was off and running, clearing the table and capping off his comeback.

A few minutes later, Kaci was at the same table attempting to build on his lead when the power was knocked out at the casino. Once electricity was restored and the match resumed approximately two-and-a-half hours later, Yapp quickly tied the score with a safety victory and a dry break from his opponent. The Albanian snagged two more racks to regain the lead, 5-3, and had a chance to increase his lead further but missed an 8 ball in the ninth game. Yapp cleared the table then tacked on another game to once again tie the match.

Kaci took another two-game lead thanks to a dry break from his opponent and a missed kick shot. Once more, he had a chance to push the lead to three racks but missed a 7 ball in the 13th game. Yapp retaliated, tying the score once more and running through the balls in the 15th rack with a chance to take his first lead until he misplayed position on the 6 ball and missed. The Albanian cleared the table to take an 8-7 lead, then scratched on the break in thefollowing game to allow Yapp to tie the score for the fourth time. 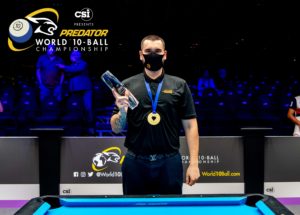 Once again shooting with a chance to take the lead, Yapp missed a shot at the 1 ball in the 17th rack but left his opponent hooked behind the 8 ball. After a lengthy safety exchange, Yapp forfeited the table when he pocketed the ball in the wrong pocket. This time, Kaci made sure there weren’t any more comebacks left in Yapp tank. He cleared the table to take a 9-8 lead, then used a one-rail, table-length kick to pocket the 2 ball, run out the 18th game and secure the a spot in the championship match.

The World 10-Ball Championship is a proud part of the CueSports International Expo in Las Vegas. The CueSports International Expo is also home to the BCA Pool League World Championships, USA Pool League National Championships and numerous industry exhibitors. The 11-day billiard extravaganza attracts more than 6,000 pool players from around the world, consumes 150,000 square feet, and uses over 300 Diamond pool tables with the goal of always providing the greatest pool experience in the world.

This competition is played on Diamond Pro-Am pool tables covered with Predator Arcadia Performance Cloth, with Predator Arcos II balls, and under the Predator Arena billiard lights. Kamui and Omega Billiard Supplies are also partners of the event.
For the latest information on the Predator Pro Billiard Series action, follow @ProBilliardSeries on Facebook and Instagram. For Live broadcasting watch Billiard TV  or follow WorldBilliardTV on YouTube for replays.