STRIDING, AND STUMBLING, OUT OF THE GATES
Day 1 at the 2015 MP Cup World 10-ball Championship in General Santos City sees some favorites cruise while others struggle to find their form.
By Ted Lerner
WPA Press Officer

(General Santos City, Philippines)–One thing that is a constant in any world championship in the sport of pool is good old pressure. But as the 2015 MP Cup World 10-ball championship kicked off on Tuesday in the Philippines southernmost city of General Santos, it was not the usual nerve rattling pressure that makes grown men cry and brings back the fans time and again that was on display. It was, rather, that nagging pressure to get out of the gates quickly, to find that championship spark that can carry you to glory later in the week. 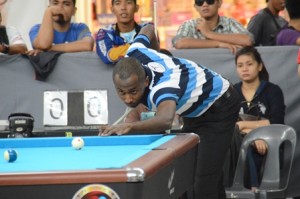 “There’s two kind of pressure in these events,” said an obviously relieved Karl Boyes after he took down former world 9-ball champion Ronnie Alcano of the Philippines 9-7 in their first match of the group stages. “The first pressure is trying to get through the group stages, to just get those two wins and get into the single elimination. There’s nothing worse in this game then going out in a world championship in the group stages. All of us feel that the tournament doesn’t really begin until the single elimination stage. Then, if you can then make it to the final 16, that’s when you look around and realize you’ve got a chance to win the world title.”

Indeed with 51 matches in the books after a long Day 1, nobody amongst the 128 players from nearly two dozen countries is touching the subject of winning the crown. For the next two days, it’s all about winning the required two matches, getting out of your group and securing a spot in the money rounds, the Final 64, which begins Thursday night. It’s a pressure to perform, and, especially for the top players, to not embarrass themselves.

There was a host of terrific matches inside the SM City atrium today with many  contests featuring top names squaring off against each other, adding that extra element of drama and gravity to the proceedings. Plenty of matches went all the way to the wire, leaving one player greatly relieved and the other suddenly staring at elimination.

In a match featuring two up and coming quality players, Canada’s John Morra found himself down to 8-5 in a race to 9 to the Philippines Jundel Mazon. But just when Mazon thought he had the match won, he slipped and allowed the Canadian a lifeline. Morra turned the tables on the Filipino and sent him to the losers’ side of the group with a brilliant comeback.

“He made a few mistakes when he was up 8-5,” Morra said.  “I just started putting pressure on him and I could see he was feeling it. I played really well at the end.”

The Philippines Dennis Orcollo is surely one of the favorites here this week, but he struggled against fellow Filipino Oliver Medenilla. Down most of the match, Orcollo discovered his groove just in time to win a squeaker, 9-8 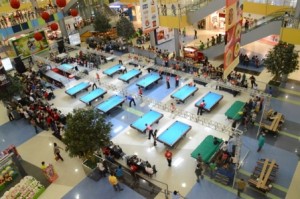 “I didn’t feel that good today and I didn’t break that well,” said Orcollo, the world number 7. “There’s always pressure in the first match because you don’t know the tables and how to break. But I finally figured out the break. That’s the key to winning this tournament is the break shot. If I can break good, I’ve got a chance. And I know how to deal with the pressure in the knockout stages.”

The Philippines veteran Warren Kiamco is coming off a massive victory in the US at the Derby City 9-ball and could surely find himself in the winner’s circle here this week. But young Filipino upstart Raymart Comomt proved yet again that the talent pool in the Philippines runs as deep as Sarangani Bay here in Gen San. Comomt took Kiamco to the limit before falling to his elder at the line, 9-8.

Two-time World 9-ball Champion Thorsten Hohmann has found lots of success in the Philippines but he’ll have to bear down over the next two days, as he fell in a nail biter to Indonesia’s Sharoni, 9-8. China’s talented young star Wang Can had his hands full with Philippine veteran Antonio Lining, winning a tight match, 9-8.

One player who seems to play pressure free these days is World number 1 Chang Yu Lung of Taiwan. He opened the day in a quality matchup against Spain’s David Alcaide. Smooth and steady as always, Chang cruised to a 9-6 victory and looks set to go far this week.

Perhaps the finest performance of the day was put in by the Philippines’ Antonio Gabica. The Qatar based Gabica, who two years ago took runner up in the World 9-ball Championship in Qatar, stomped on world number 11 Lui Haitao of China, 9-3.

Another Qatar player, Waleed Majid, currently ranked number 12 in the world, continued  his fine tournament form as he defeated the Philippines Jordan Legaspi 9-6. Majid is the highest ever ranked player out of the Middle East and his dedication to the sport is paying big dividends.

Play in the group stages continues on Day 2 of the World 10-ball Championship. The field of 128 will be cut in half by late on Day 3 on Wednesday when the final 64, single elimination stage of the tournament begins. The semi-finals and final will take place on Saturday. 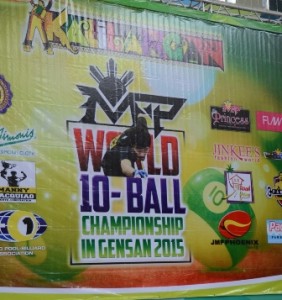 **The 2015 MP Cup World 10-ball Championship takes place at the SM Mall in General Santos City, Philippines   from February 15-21 and is sanctioned by the World Pool & Billiard Association(WPA), the world governing body of pool. The entire event is sponsored by Manny Pacquiao.

RESULTS DAY 1
Winners need one more win to advance to the Final 64. Losers go to the losers side of the double elimination bracket for another chance. 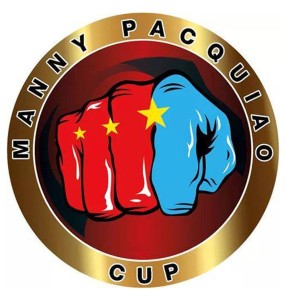