McDermott Cue and Nathaniel “Okinawa Slim” Bryant are proud to celebrate 38 years of promoting the sport of pool together. 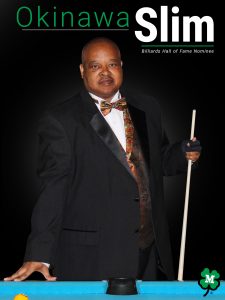 In June, 1982, after meeting Okinawa Slim at the Miller Lite Beer World Series of Tavern Pool Tournament in Las Vegas, Jim McDermott agreed to sponsor Bryant in his pool career. Since that Handshake, McDermott Cue has been Bryant’s sole cue sponsor and the provider of his main playing cue.

Born in Sanford, Florida, Nathaniel learned to play pool at the age of seven (7) from his Father who was the owner of a pool hall and restaurant. He gained notoriety, and his nickname, while stationed at the U.S. military base in Okinawa, Japan as a United States Marine during the late 1970s. There he began entering competitions, winning sixteen consecutive tournaments and appearing in newspaper and television interviews.

“The contribution Okinawa Slim has provided for the sport over his life is commendable. It’s important to me that we stand behind individuals whose commitment and loyalty to the sport is such a good match for the commitment we have to the quality of our cues,” said Greg Knight, owner of McDermott.

Since its founding in 1975 by the legendary cuemaker Jim McDermott, McDermott Pool Cues has consistently produced handcrafted cues that look as good as they play. Produced in a state of the art manufacturing facility located in the United States, McDermott cues combine groundbreaking technologies with high-quality materials and exquisite artwork. They have become a favorite of players the world over. The company also produces cues under the Star Cues, Lucky Cues, Sledgehammer Break Cues, and Stinger Jump/Break Cues brands.

For more information about McDermott Cue, contact Andrew Bullis at andrew@mcdermottcue.com or call (262) 345-6503.