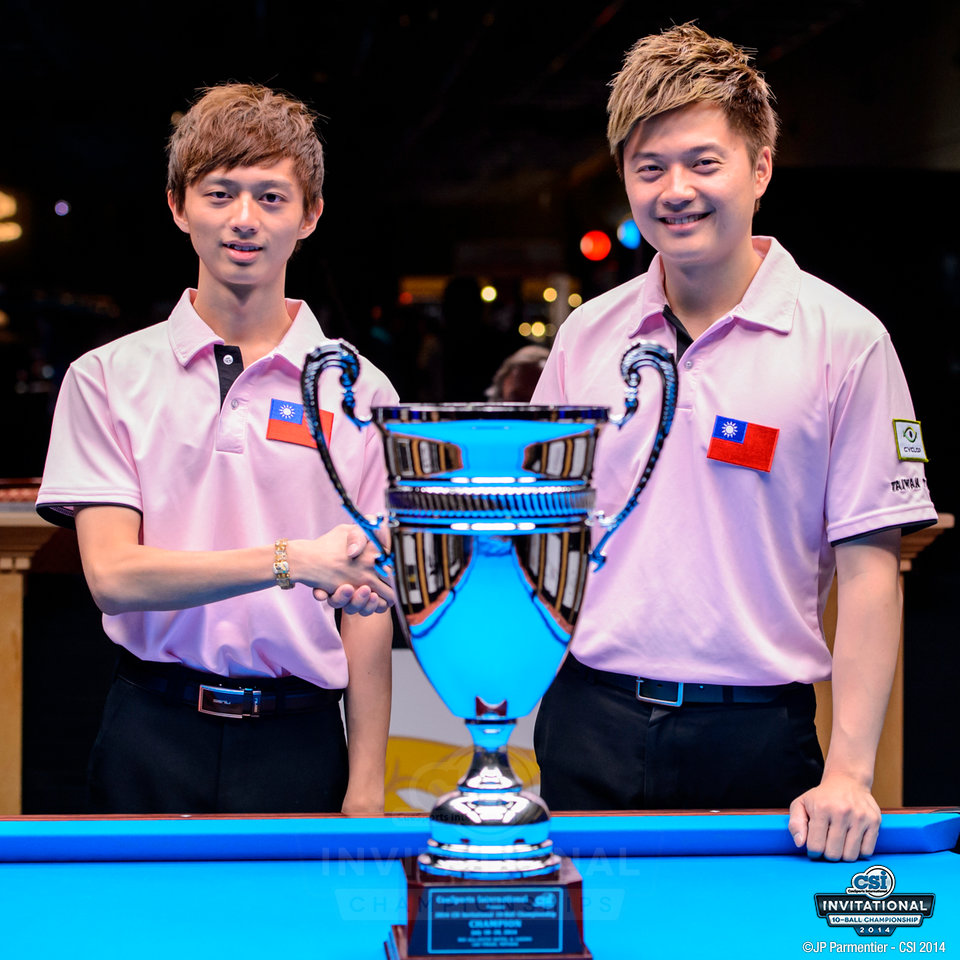 Pin-Yi Ko defeated his younger brother Ping-Ching Ko 11-9 in an all Taiwanese final to win the CSI Invitational 10-Ball Championship on Sunday night at the Rio Hotel & Casino in Las Vegas, Nevada.

The first order of business for Sunday was to determine the final two players who would join Pin-Yi Ko and Dennis Orcollo in the single elimination bracket. Both groups C & D held three players who could figure into the decision as to who would win the group.

Group C could have gone to a three way tie if Efren Reyes defeated Ralf Souquet. Souquet did away with that thought quickly when he took a quick 5-0 lead over the Magician. Reyes at least made the match competitive, but Souquet won the match 9-4 to leave the Ping-Chung Ko/John Morra match to determine the group winner. That match was a tight one. Morra held an early 4-1 lead, but the younger of the Ko brothers fought back and took the lead at 7-6. Morra was running out to tie the score at 7-7 when he missed a 10-ball and that was the beginning of the end for the young Canadian star. Ko won the match 9-7 and joined his brother in the single elimination bracket.

Group D was similar to group C in that a win by Corey Deuel over Yu-Hsuan Cheng could lead to a three way tie. In addition to the Deuel win, Francisco Bustamante would have to hand Jayson Shaw his only loss in the end for that tie to materialize. When Bustamante held an early 4-1 lead, organizers were preparing for the tie-breakers needed to determine a winner. It seemed early on that Shaw was worried more about the Deuel/Cheng match than his own match. He finally remembered that he could do away with any tie-breaker talk by beating Bustamante and got back into the match. Shaw tied things up at 7-7 and then won the final two racks for the 9-7 win to give him the group win. Deuel did end up beating Cheng 9-4 in the final match, but by then they were only playing for the third round bonus prize.

The first semi final match – pitting Dennis Orcollo vs Pin-Yi Ko – was all about momentum. Although the match was alternating break, the pool gods seemed to favor the player who had won the previous game for the majority of the match. Ko looked like he would run away with things early as he cruised to a 6-1 lead, but Orcollo had been in this position before and he bided his time waiting for his chance. Orcollo pounced on an opportunity in rack seven and won four quick games to get back to within two at 4-6 down. Just when it looked like Orcollo was in control, he scratched on the break in rack eleven and Ko won the next two games to reach the hill at 8-4. That proved to be too high a hill to climb for Orcollo as Ko won the match 9-5.

By contrast, the second semi final match – between Ping-Chung Ko and Jayson Shaw – started out trading momentum more often than a tennis tie breaker. The first eight racks saw one break and run, and neither player able to do much on their break. That all changed in rack 9 when the players started trading break and runs. With the player breaking having the momentum now, the match came down to rack fifteen when Shaw broke dry. Ko ran that rack out for the hill at 8-7. Ko had no shot on the one after his break in rack fifteen, but a lock up safety led to ball in hand and a 9-7 win for the younger Ko brother.

The race to 11 finals came down to two players whose games are nearly identical. The two brother’s pattern play is the same, their style at the table is the same, and they bring the same abilities to the table that their opponent does. While Ping-Chung has a better record than his older brother in head to head play, it was Pin-Yi that was able to forge the matches first multi rack leads at 3-1 and 8-6. Late in the match, both player’s concentration appeared to fade and neither player was showing the same level of play that they had displayed earlier in the week. Pin-Yi reached the hill first, at 10-8 and then broke and ran the 20th rack for the 11-9 win.

Pin-Yi earned $8000 for first place, while Ping-Chung settled for $5000 in prize money. Next up in Vegas is the OB Challenge, pitting Mike Dechaine and Corey Deuel against Efren Reyes and Francisco Bustamante in a race to 21 scotch doubles 8-Ball match on Monday night.

Watch the rest of the CSI Invitationals and challenge matches live at www.playcsipool.com.  CSI is the parent company of the BCA Pool League and the USA Pool League. CSI also produces independent events such as the US Bar Table Championships, Jay Swanson Memorial, US Open One Pocket Championship, US Open 8-Ball Championship, US Open 10-Ball Championship, CSI Invitationals, and CSI Challenge Matches. Visit www.playcsipool.com,www.playbca.com, andwww.playusapool.com for more information and visit the CueSports International YouTube channel for lots of great content.