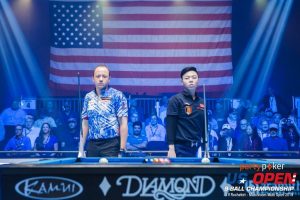 Wu Jiaqing will face Wang Can in the quarter-finals of the partypoker US Open 9-Ball Championship after dumping American No.1 Shane van Boening out of the tournament at Mandalay Bay Resort and Casino Convention Center, Las Vegas, live on Sky Sports and DAZN.

Van Boening ran the first two racks of the match and lead for most of the match, but at 7-4 down Wu fought back with four consecutive racks to lead for the first time. Two more games went in Wu’s favour to take the World Cup of Pool winner to the hill, but the former World Champion wasn’t left with a shot on the 1 after breaking for the match.

That allowed Van Boening a route back into the match and the South Dakota Kid looked to be taking it but missed the 9, provoking gasps from the 600-strong crowd. Wu was left a long cut on the 1 ball to the bottom left pocket. He called for his shot-clock extension, took his time and rolled the winning ball home.

Earlier, Wang had defeated Ryan Hsu for his place in the quarter-finals. Hsu had taken a 2-0 lead but Wang took five straight racks to gain the upper hand in the match. The Chinese went in off during the 10th rack to offer Hsu a lifeline, but Wang was soon back at the table and won five racks without reply to seal the victory.

Play continues with all four quarter-finals scheduled for Thursday. All matches at the partypoker US Open 9-Ball Championship are race to 11, winner breaks, except the final which is race to 13. Live scores are available now at www.matchroompool.com.

Alex ‘The Lion’ Pagulayan will meet Jeff De Luna in the quarter-finals of the partypoker US Open 9-Ball Championship after both came through gripping last-16 matches at the Mandalay Bay Resort and Casino Convention Centre, Las Vegas, live on Sky Sports and DAZN.

Pagulayan, the 2005 US Open Champion, defeated Aloysuis Yapp in a hill-hill thriller which was exactly that – an entertaining battle which twisted and turned throughout.

It was Yapp who reached the hill first, at 8-10. However, the Singapore sensation missed on the 6 to allow Pagulayan what should have been a routine run-out. The Canadian misjudged the bounce off the rail playing position on the 9 but played an inch-perfect bank to the right middle to pull within one. A runout took him to the hill and he then played a controlled decided rack to complete the comeback and progress to the last eight, to the delight of the packed Diamond Arena.

Earlier, Jeff De Luna saw off England’s Imran Majid to set up a quarter-final against a familiar foe in the form of Pagulayan. The Filipino had trailed for most of the match but from 8-5 down found his form to win six of the following seven racks to take the match.

“I was really happy to win,” said De Luna. “This week I feel like my game had been at 95% but today I felt pressure at the start of the match. I got comfortable with the speed of the table and was able to come back. Imran was playing well, I have played him before but this was the best I have seen him play so I was really happy to be able to come back.

“I play Alex all the time in the Philippines in money games so I am very comfortable against him. He is a great player, a World Champion, but the table is anybody’s during a game situation.”

Jayson Shaw’s partypoker US Open 9-Ball Championship defence is over after he was defeated 11-4 by World Champion Joshua Filler at the Mandalay Bay Resort and Casino Convention Center, Las Vegas on Wednesday, live on Sky Sports and DAZN.

Filler will now play Francisco Sanchez-Ruiz in the quarter-finals after the Spaniard beat Ko Ping-Chung 11-4 in the morning session’s second last-16 fixture.

Having lost to Hsu Kai-Lun on Monday evening ‘Killer’ Filler had to battle through four losers’-round matches on Tuesday to reach the single elimination stage but showed no signs of fatigue as he won ten consecutive racks to overturn an early 3-0 deficit against Shaw.

The Scot gave himself a glimmer of hope by taking the 14th game but Filler was soon back at the table and his outstanding form was evident again as he made the final 9 in style to move into the quarter-finals.

“To play the defending champion, I was quite nervous,” said Filler. “I got a good break and that gave me a lot of confidence. It was a 50/50 match; we have both been champions of big events so it could have gone either way.

“I have had some tough matches already; I had to beat Alex Kazakis, Albin Ouschan who are two of the hottest players in the world. I won the World Championships in December but this is the toughest tournament I have ever played, it is unbelievable.”

Filler will now play Sanchez-Ruiz on Thursday after the Spaniard put in a confident performance against Ko Ping-Chung. Having already knocked out Ping-Chung’s brother Ko Pin-Yi in the winners’ qualification match yesterday, Sanchez-Ruiz built an early 6-1 lead. Ko fought back to within two but struggled to find his rhythm and his opponent was soon back at the table and raced to a comfortable 11-4 victory.

“I played so well in the match and was really happy with my play,” said Sanchez-Ruiz. “I played against both players and played well so I am really happy. They are both top players in the world so they were difficult matches. The quarter-final will be a tough match. Filler is World Champion but I am focussed on my game and I believe in my game, so we will see what happens.”

Play continues with four more last-16 matches schedule for Wednesday. All matches at the partypoker US Open 9-Ball Championship are race to 11, winner breaks, except the final which is race to 13. Live scores are available now at www.matchroompool.com.

Players are playing for their share of a $300,000 tournament purse. The winner will take home $50,000, the famous US Open green jacket and the newly-commissioned Barry Behrman trophy.

Tickets for the 43rd partypoker US Open 9-Ball Championship are still available at www.matchroompool.com from as little as $10 with VIP packages also available for the final three days of the tournament.

After 488 matches of double elimination pool the partypoker US Open 9-Ball Championship is down to the last 16 as play moves into the Diamond Arena at Mandalay Bay Resort and Casino Convention Center, Las Vegas on Wednesday.

The tournament now switches to single elimination, with global television coverage including Sky Sports and DAZN. The top two seeded players – defending champion Jayson Shaw and US No.1 Shane van Boening – both came through the double elimination stage unscathed and will now face Joshua Filler and Wu Jiaqing respectively in two of the standout matches from the last 16.

Tuesday’s action ended with the final eight matches on the losers’ side of the double elimination brackets. Filler beat Petri Makkonen 11-6 to progress, while Wu booked his match with Van Boening by defeating Mieszko Fortunski in the 21st and final rack of their match.

Elsewhere there was success for Aloysuis Yapp over Ko Pin-Yi, whose brother Ko Ping-Chung beat Tyler Styer 11-7. There were wins too for Lui Haitao and Wang Can of China, while Jeffrey Ignacio’s victory over Dennis Hatch means Van Boening is the only play from outside of Asia in the bottom half of the draw. England’s Imran Majid defeated Cheng-Chieh Liu of Taiwan and will now face Jeff De Luna.

All matches at the partypoker US Open 9-Ball Championship are race to 11, winner breaks, except the final which is race to 13. The draw and match schedule for the first stage of the tournament is available now at www.matchroompool.com.

Players are playing for their share of a $300,000 tournament purse. The winner will take home $50,000, the famous US Open green jacket and the newly-commissioned Barry Behrman trophy.

Tickets for the 43rd partypoker US Open 9-Ball Championship are still available at www.matchroompool.com from as little as $10 with VIP packages also available for the final three days of the tournament.

This e-mail and any attachments are intended only for the individual to whom it is addressed and may contain privileged and confidential information. If you have received this message in error or there are any problems, please notify the sender immediately and delete the message and any copies from your computer. The unauthorised use, disclosure, copying or alteration of this message is forbidden. Any views set out in this e-mail are the views of the individual sending it, and not the views of Matchroom Sport Limited or its group/associated companies unless otherwise stated. This e-mail should not be seen as forming a legally binding contract unless otherwise stated.