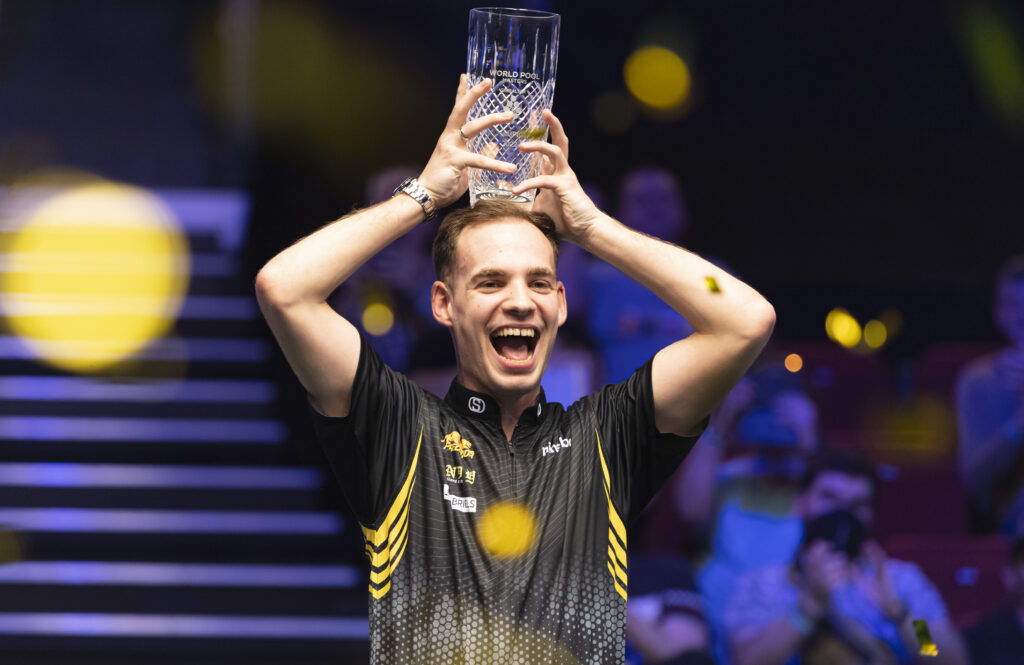 Filler set up a final with Lo after coming from 3-0 behind to win the following seven racks to clinch a 7-3 victory against former world champion Ko Pin Yi at the start of the evening. The German claimed his first World Pool Masters crown in a 9-6 win to become one of very few to win the World Pool Championship, US Open Pool Championship, Mosconi Cup, World Cup of Pool, and World Pool Masters in their career at just the age of 24.

The opening rack didn’t go to plan for Filler after winning the lag, he scratched off the break to hand Lo the early advantage. Breaking in the second, Lo was full of confidence as he rack the rack to lead 2-0 against the previous US Open champion. Into the third rack and Lo had a chance on the two but it was obscured by the seven. Filler duly got to the table and made it 2-1. Before too long, Filler was back on top turning it around to lead 3-2 and looking like putting on the performance that saw him down Dennis Orcollo in the quarter-finals 7-0. The Killer soon hit 4-2 at a breeze but this wasn’t going to be as easy for him after he underestimated the speed of the table when playing safe on the two ball. That move was costly to allow Lo back at 4-3 and soon 4-4 with his first break and run of the match.

Lo’s stroke was getting better and better and another break and run in the following rack put him back in front for the first time since 2-1. Filler was frozen to his chair as the road map became even clearer for Lo who broke and run again in the 11th rack to put a two-rack buffer between the pair, the shot of the rack coming on the seven after losing position on the cue ball briefly.

Filler got back at the table in the 11th after Lo missed a tricky two ball, but the current World Cup of Pool holder couldn’t put pay by making the 2 7 combo. However, the rack wasn’t done yet as Lo left himself with a horrible cut on the three. From there, Filler ran out the rest of the rack to be behind by one at 6-5.

The reputation of nerve and grit is what makes Filler one of the most feared players on tour and he was far from done in the contest as he ran the 12th rack to level again at 6-6.

As the 13th rack began, Lo was back at the table after Filler broke but he blew it as quick as the chance came on the six ball after losing the cue ball forcing him to play an awkward cut to keep the rack going in his favor. It didn’t happen though, and Filler led once again at 7-6, a smart shot on that six freed up the seven which was frozen to the rail to complete the rack and break in the 14th.

Filler had the brilliance to spot a 3-6 combination and help him clear the table despite a poor break to reach the hill at 8-6. Victory was in Filler’s hands as he ran the last rack for a memorable win.

“I want to get better and better; I still made many mistakes; I still want to do better. I will try to be better. I will come back to defend this title for sure! I wanted to fight until the end and that’s what I did. Fair play to Lo Ho Sum who played a great week beating the World Champion Shane Van Boening. Since Matchroom announced they’d changed the pockets, I did the same in my home. It’s a different game. I felt great. I hope this is the future of pool. When I am back home, I will work hard on my safety game and be ready to go again at the UK Open.

Lo said: “It was the best experience ever this week. I would like to have more tournaments like this to get more experience. I am speechless this week. Kelly Fisher has helped me a lot for the upcoming events. ”