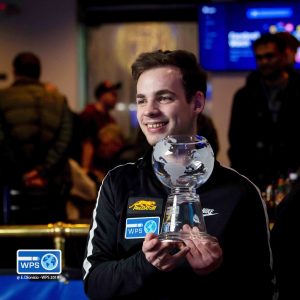 Shortly after Jayson Shaw was selected over Joshua Filler for the European Mosconi Cup team with the final wildcard pick, the fiery young German realized a couple of things.

First, he had much work to do to become the professional pool player that he believed he could be. Additionally, what better time to start than now? Under the instruction of coach Michael Wahl, Filler started working on his game between four-to-eight hours a day in the weeks after the selections were made.

The new commitment continued to pay dividends this weekend, as Filler fought his way through an elite field of 50 players to win the Predator Grand Final, defeating countryman and mentor Ralf Souquet 17-11 in the finals Sunday night at Astoria’s Steinway Billiards. The victory was a continuation of a masterful and lucrative 30-day stretch for the 20-year-old, who bested Carlo Biado of the Philippines at the WPA World 9-Ball Championships late last month in Qatar.

“I played pretty well. It was a tough field,” Filler said. “I feel like in the second half I had a little more confidence.”

It was Souquet who had the confidence early on in the match, as the Billiards Congress of America Hall of Famer used two dry breaks from Filler and a break-and-run of his own to take an early 3-0 lead. The scrappy Filler slowly whittled the lead away, using a Souquet foul and a break-and-run to cut the lead to 3-2. Filler tied the match at four games each when he recorded another break-and-run and took advantage of his opponent’s miss of the 6 ball in the eighth game.

Souquet never again regained the lead, as the young German used a Souquet foul, a victorious safety battle, another break-and-run and a dry break from his opponent to win four straight and surge ahead, 8-4. His former Mosconi Cup teammate trimmed the lead to 8-7 with the help of a missed shot in the 13th game and dry break in the 15th game by his opponent.  However, Filler used a jumping bank shot on the 1 ball in the 16th game and a break and run in the 17th game to extend his lead to 10-7 at the intermission.

The young German continued his dominance in the second half of the match, winning three of the first four games to push the lead to 13-8. Souquet closed the deficit to four games when Filler missed a makeable 8 ball in the 22nd game but his opponent broke-and-ran yet again then utilized some strong safety play to pick off the next two games. 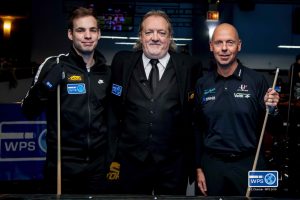 Souquet continued to grind despite his mental struggles, picking off a couple of games to cut the lead to 16-11. However, any hope of a comeback ended when he committed a foul during one last safety exchange during the 28th game, giving Filler ball-in-hand and the match. After pocketing the game-winning 10 ball Filler gave his customary fist pump and yell while the assembled crowd applauded.

Of Filler’s 17 wins in the championship match, six were of the break-and-run variety.

“I made too many mistakes and I missed way too many kick shots,“ Souquet said after the match. “Overall, Josh played better and he deserved to beat me.”

This concludes the end of the 2018 WPS Season. The WPS team would like to thank all our sponsors, staff, players, and fans at home and at the venues for all their support!

This last event of the 2018 World Pool Series, The Predator Grand Final, is being held at Steinway Billiards in Astoria, Queens, New York City from January 17-20, 2019. The World Pool Series is sponsored by Predator, Poison, Aramith, Rasson, Iwan Simonis, Tiger, and Kamui. Our suppliers and partners are Billiards Digest, CueScore, Let’s Go Print, Outsville, UpState Al, and the WPA.