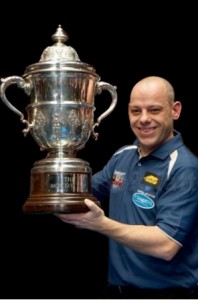 Darren Appleton is arguably the most exciting pool player on the planet and is one of the first names on the team for each Mosconi Cup. The English player from Pontefract, Yorkshire, is now based in Pennsylvania, USA and is delighted to be representing Strachan, one of the world’s finest cloth manufacturers.

Appleton said “Strachan cloth is the perfect speed. It is accurate & responsive. Other cloths need time to bed in but Strachan SuperPro plays consistently from day one and enables me to have exact control of the cue ball”.

Ahead of the busy international calendar Appleton emphasised the importance of preparations under tournament conditions and went on to add. “I first met Strachan in 1999 and have always respected their work, quality products and professionalism. The Strachan SuperPro always plays incredibly well. It gives me the touch, precision and confidence you need as a professional player.”

Duncan Kettell, Sales Director at WSP Textiles in Stroud said “it is an honour to welcome Darren alongside Judd Trump as our latest Brand Ambassador. He will represent Strachan SuperPro our professional cloth for American pool. Darren is an extremely exciting player who has excelled in every pool discipline, English, American and China 8 ball pool. He has won pretty much every serious title that there is. Darren is the ultimate professional and is an extremely popular player who generates excitement wherever he plays around the world.”

Darren was born in Pontefract, West Yorkshire on 8th February 1978 and started playing pool from the age of 12. Last year alone Darren played in all major championships worldwide including the Matchroom Sports events, the World Masters, the World Cup of Pool,  Chinese 8 Ball Masters, the China Open 9 ball, and the World 9 ball in Qatar.

Since 2008 Darren has been ever present in the top 6 WPA World Rankings and on 3 Occasions has been the World no 1. His recent achievements include :-