Karen Corr was looking for an event to try out her ailing back. The Billiard Congress of America Hall of Famer has just spent the past few weeks working in North Carolina while her lower back caused her some discomfort. Having relocated back to the Washington D.C. suburbs in recent weeks, Corr decided to give last weekend’s J. Pechauer Northeast Women’s Tour event at Champion Billiards in Frederick, Md. a try. “It was just up the street, the tournament,” said Corr, who now makes her home in Rockville. “I just wanted to have a little test with a two-day event and see how my back held up.” Her back and her game passed with flying colors, as Corr went undefeated in her first JPNEWT event of the year – defeating Kim Whitman 7-1 in the finals of the tournament Sunday evening. The victory was her fourth consecutive JPNEWT victory in Frederick.

Corr put on a dominating performance through most of the 24-player tournament – opening with a 7-2 defeat of Cecilia Strain followed by easy victories against Christie Hurdel, 7-1 and Christina Madrigale, 7-2. After a 7-0 blanking of Char Dzambo, Corr squared off in the hot seat finals against Kim Whitman. Corr maintained control throughout the match, but Whitman didn’t go away quietly, stealing a handful of games before falling, 7-4.

“I had to tighten up the belt a bit there, which is what you want: to be challenged,” Corr said. Whitman moved over to the one-loss side and faced Madrigale, who had won four straight matches after a third-round loss at the hands of Corr. Madrigale jumped out to an early lead and was poised to increase her lead to 5-2 in the race to seven match, but scratched into the corner pocket after trying to use follow on a shot on the 8-ball. 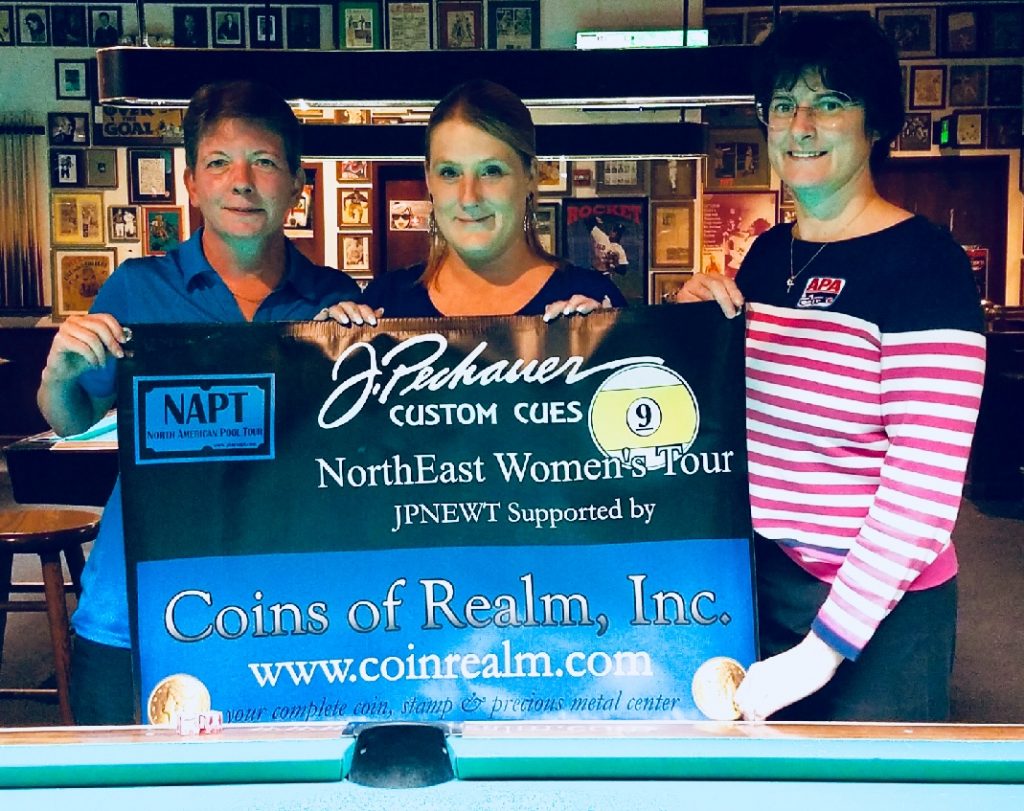 “That was a pivotal shot. That gave me a punch in the arm,” Whitman said. “I feel like she was playing a lot better and the fatigue was starting to get to me.” Whitman used some clutch shot making to claw back and gut out a 7-6 victory. The sequel against Corr wasn’t nearly as close as the first match. Using a break and run and along with a couple of stellar safeties, Corr jumped out to a fast 4-0 lead. After Whitman won the fifth game, Corr took advantage of a misplayed safety, and a scratch on the break by her opponent, to win the final three games and close out the match.

“My break wasn’t working, and I certainly wasn’t pocketing balls the way I was in the first match with Karen,” Whitman said. It wasn’t all bad news for Whitman, who continues to work her way back into playing shape after undergoing surgery to repair her left shoulder in November. The runner-up finish qualified her for the North American Pool Tour (NAPT) Desert Challenge at Griff’s Billiards in Las Vegas, during the third week of September.

Madrigale also turned in a strong performance in Frederick, battling her way through the one-loss side to a third-place finish. After her loss to Corr she won a hill-hill match against Elaine Wilson, then defeated Teri Thomas, 7-5, and Bethany Sykes, 7-4. With a chance to reach the semifinals on the line, Madrigale trailed Nicole King 6-4 and appeared on the verge of elimination until King scratched while pocketed what would have been the match winning nine-ball. Madrigale was able to use safety play, and a few clutch shots, to tie the match and win yet another hill-hill deciding game. “I actually did way better than I thought I was going to do,” said Madrigale, who added that she usually plays in eight-ball tournaments on seven-foot tables.

The JPNEWT tour is back in action August 11-12 at Triple Nines Bar and Billiards in Elkridge, Md. The tour is sponsored by the following: J.Pechauer Custom Cues; Coins of the Realm added $500 to the event in Frederick ($300 to 1st place, $100 to 2nd, and $100 to 3rd); Baltimore City Cues sponsored the qualifier spot; and billiards artist Brit Rapp, sponsors the live streaming