This is a pretty basic shot that uses the principle of rail compression and spin to great effect. Mike Massey calls this the Johnny Cash Special in his book. The cue ball is trapped in between a blocker ball and the cushion, but shooting into the rail lets it escape and the spin reverses off of the short rail to kick the 8 ball in the side pocket.

The set up for the shot is very straightforward. I freeze the cue ball between cushion 1 at the 2nd diamond and a blocking object ball. I set up a second blocker ball (‘X’) 1/2 diamond from the side pocket on cushion 1. The 8 ball is hanging in the side pocket but shaded towards cushion 2.

First, find a good aim point that will let you clear ball ‘X’. For me, it’s where the cushion, rail, and side pocket meet. Then add enough spin to get the reverse kick. You don’t want to shoot too hard otherwise the spin won’t grab as much off the foot rail. It’s also possible to over-spin the cue ball and hit cushion 2. Dial in the spin and aim point combination and you should be making this over 90% of the time.

You can also move the setup around up and down cushion 1 to see how that changes your aim point and amount of spin you need to make the shot. How close can ball ‘X’ be for you to still get by? How far away from pocket C can you hit and still get the reverse to come back to pocket the 8 ball?

If you’re playing on brand new cloth, it can be difficult to get the spin to grab off the short cushion. The cue ball will tend to slide more and you may need to elevate your cue to impart a little masse. You could also use this to try to get around ball ‘X’ if it’s a little closer as well.

Here’s the next trick shot article and video: 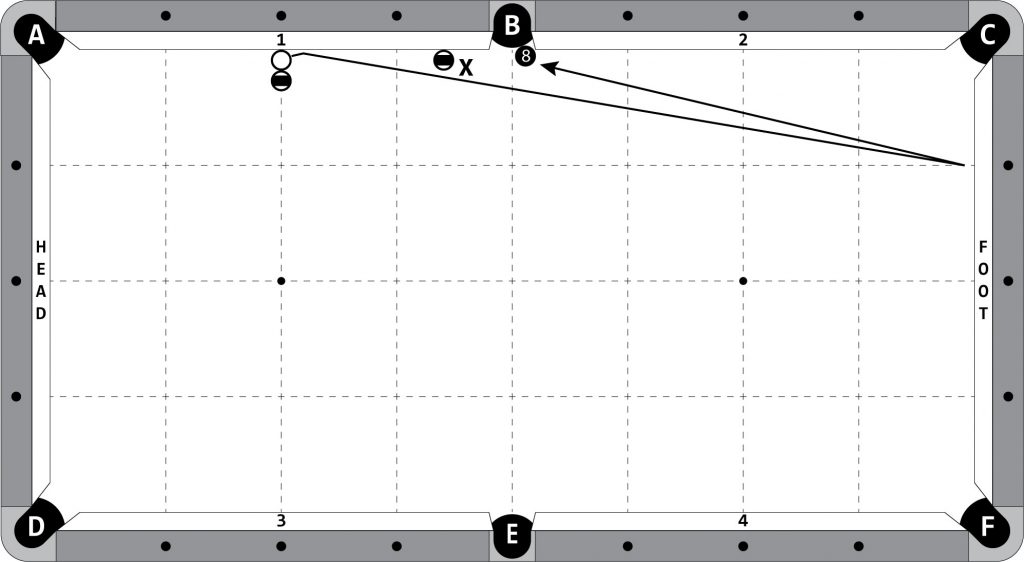