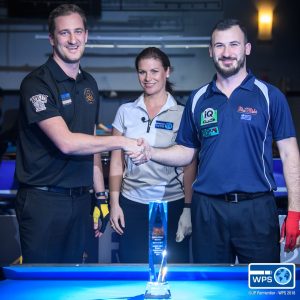 During the third weekend of April, Alex Kazakis of Greece and Denis Grabe of Estonia squared off in the finals of the Dynamic Billiard Ballazzo Open in Austria, with Kazakis besting his 28-year-old friend in the finals, 9-5.
The following week, the two men moved across the Atlantic and met again in the finals of a tournament – the Aramith 9-Ball Players Championship. This time, it would be Grabe evening the score, using a combination of ball pocketing and stellar safety play to easily defeat the young Greek 17-7 Sunday evening at Astoria’s Steinway Billiards.

“I wanted to win because last week we played in an Eurotour event and he beat me. So, this was a sweet revenge,” said Grabe, who also lost to Kazakis in the quarterfinals of the Kremlin Cup last year. 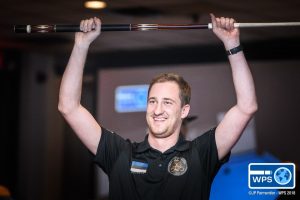 The match was nip-and-tuck in the early stages, as Kazakis won the first two games then watched as Grabe sunk the 2-ball on a jump shot following a push out – the first of four consecutive games that he would win to take a 4-2 lead. Kazakis fought back with three straight wins of his own and had a chance to increase his advantage to 6-4 but missed a 4-9 combination shot.

“The turning point of the match was that. After that it was only in favor of Dennis all of the time,” Kazakis said. “I didn’t really have a chance to be at the table. I only had tough shots to make and I missed all of the tough shots.”

Grabe would tie the match after the missed combination attempt, then use two breaks and runs along with frustrating safety play to win the next seven games and take an 11-5 lead into the 15-minute intermission.
Of Grabe’s 17 wins only three were of the break-and-run variety despite not executing a dry break the entire match. With few clear shots after opening the game, Grabe had to focus on tying up his opponent with safety play and then taking advantage of any mistakes, which he did throughout the match.

After the break in play Kazakis’ frustrations continued. Despite Grabe twice relinquishing control of the table after consecutive illegal breaks Kazakis still didn’t see a clean shot on an object ball – losing a safety battle in one game and missing a cut shot on the one-ball in the side pocket in the next rack. Meanwhile, Grabe used a 2-9 combo, some more safety play, and another miss by Kazakis on a 3-ball in the 24th game to close out the match.

The Estonian opened the tournament by narrowly escaping Alex Pagulayan 11-10 in the first round then was sent to the one-loss bracket after an 11-9 defeat at the hands of Lee Vann Corteza. Grabe then defeated Ronnie Alcano, Joey Korsiak, and Ruslan Chinahov on Friday to reach the Saturday quarterfinals and face Petri Makkonen. Grabe ran six straight racks on his way to an easy 13-3 defeat of Makkonen, then took advantage of some mistakes from Dennis Orcollo to win 13-8 and advance to the finals.

“I had a couple of matches where I managed to win when I could have lost but in the final, I was like dominant. The scoreline says it all,” Grabe said.

It was a disappointing loss for Kazakis, who had many people in the Greek-owned facility cheering him on.

“I’m disappointed that I failed them, but it’s okay. One day I will win this event,” Kazakis said.
On an adjacent table earlier in the afternoon, Albania’s Klenti Kaci defeated Jayson Shaw 11-7 in the Simonis 9-Ball Players Challenge, a second-chance event for players previously eliminated from the Aramith event. After easily defeating Americans Tommy Tokoph and Kenney Nguyen in the early rounds, Kaci survived Germany’s Joshua Filler 9-6 to reach the finals.

The Aramith 9-Ball Players Championship is the first event of the four-tournament 2018 World Pool Series. This event is being held at Steinway Billiards in Astoria, Queens, New York City from April 19th to 22nd, 2018. The World Pool Series is sponsored by Aramith, Rasson, Predator, Iwan Simonis, Tiger, and Kamui. Our suppliers and partners are Billiards Digest, CueScore, Let’s Go Print, On The Wire, Outsville, UpState Al, and the WPA.
For the complete draw and live scoring please CLICK HERE.