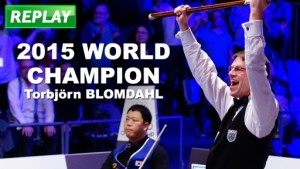 BORDEAUX – The Swedish flag was projected on the big screen behind the podium of the Palais des CongrÃ¨s in Bordeaux, in honor of a great champion. TorbjÃ¶rn Blomdahl, who has won everything and is the world nr. 1, tried in vain for years to win another world gold. This Saturday evening, his long career found a new high when he beat Korean coming man Dong Koong Kang in the final of the World Championship: 40-40, then 2-1 in the shootout.

The 53-year old Scandinavian whirlwind, who is so good at playing the audience with his facial expressions, and almost has copyright on eccentric spin shots, kept stoicly calm as the title seemed to elude him once again.

The strategy in the final was mostly defensive. Few risks were taken, there were no high runs and the Korean had the slightly better start. After some ten innings he had built up a lead (17-8), and in spite of a mini-comeback by Blomdahl (runs of 8 and 4), he kept the initiative.

When the Swede was seriously trailing (37-22) and the audience became loud in an attempt to prolong the match, his opponent got nervous. Dong Koong Kang missed twice at important moments, but still got over the line first when he ran 2 and 1: 40-34.

As so often in this WC (Zanetti, Sanchez), the spectators were treated to a sensational equalizer. Blomdahl was cool as a cucumber: ,I hoped the break-off would give me position, and that happened”, he said later. ,,I could finish from there, and did it well.”

The shoot-out for the win went the Swede’s way. Dong Koong Kang made the break, had an easy round-the-table shot for his second, but hit it way too thin and missed.

TorbjÃ¶rn Blomdahl felt on cloud nine. ,,The break is so easy here, it could not go wrong at that point.” His second and winning point was a spectacular one (short-long-long, hitting the same long rail twice) and it was executed to perfection.

The Swede’s arms went up, he bowed to the audience and enjoyed the cheers for minutes. The contrast was harsh: Dong Koong Kang was in his seat , looking forlorn. The Korean, who had won a first prize of 38.000 Euro in Seoul only weeks ago, was re-acquinted with loss and disappointment. It was touching to see how friends and fellow players comforted him.

Dong Koong Kang, nicknamed King Kong for his feared knock-outs, has a whole life ahead of him. The 35-year old player from Suwon lives like a pro in Korea, teaches three times a week or plays exhibitions in billiard rooms, and gets handsomely paid for it.

His nemesis in this tournament just keeps on winning: the Blomdahl era is not over yet. His lead in the world ranking just got a lot bigger. ,,They can go on hunting for me, for a while”, he smiled this Saturday evening, still holding the flowers from the award ceremony.

TorbjÃ¶rn’s last world title dates back to 1997, when he beat Dutchman Raimond Burgman in the final in Grubbenvorst. Since then he has lost four finals: against Marco Zanetti, FrÃ©dÃ©ric Caudron, Dani SÃ¡nchez and last year against Sung-Won Choi. After this 2015 WC, a tremendous organizational success for Kozoom with filled stands, there is no doubt:  TorbjÃ¶rn Blomdahl will be a force in global 3-cushion for years to come.

The final ranking of the WC in Bordeaux: