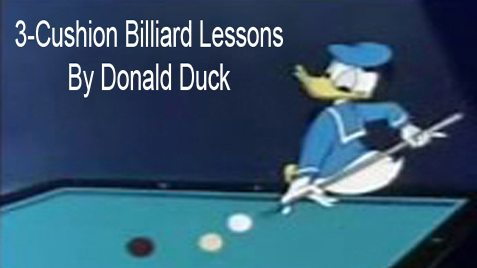 A game of timeless beauty and fascination

The game of three-cushion billiards can fairly be called the ultimate test of skill with a cue. It’s intriguing, challenging, and endlessly fascinating. To play it well requires a level of imagination and creativity missing from other cue games. There is something elegant and artistic about it, and as played at the top level its is often spectacular.

In three-cushion, you don’t have to stop every few minutes to rack balls. You don’t have to worry about your opponent running out from the break without giving you a chance to shoot. The longer you play, the more you learn, which is why some half-blind old-timers can often beat an eagle-eyed young hotshot who doesn’t understand that every shot is a blend of offense and defense.

In every game, positions arise that have never been seen before by man or beast. It is a game of both delicacy and power; on some shots the cueball must travel only a few inches, on others more than forty feet. Like chess, it is a game of infinite richness. It takes years to learn to play expertly, but also like chess, it can be enjoyed at any level. Some shots are ridiculously easy, provided you know what they are. Some shots are almost impossible, but there is always a way to score if you are good enough.