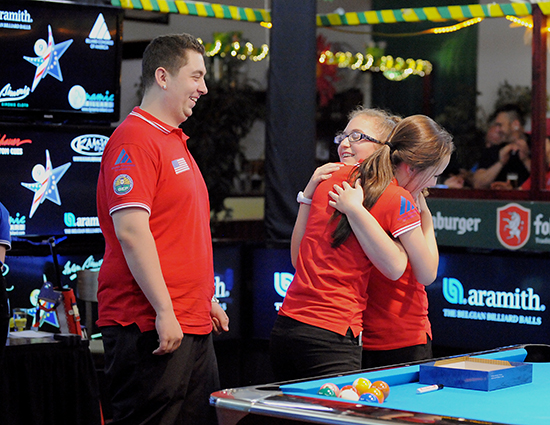 DAY 2  Europe go into day three with a 5-3 lead but it could have been worse for team USA. The morning session saw two doubles matches and Europe took advantage in both of those to move 4-1 in front. The pairing of Daniel Tangudd & Raphael Wahl beat off the challenge from Nick Evans & Drake Niepoetter 6-4 but it could have been different. Trailing 5-4, Drake missed an important 9-ball that would have tied the match at 5-5 and Europe gladly took the gift that was presented to them to move 3-1 up.

In came the girls pairing of Kristina Tkach & Marharyta Fefilava for Europe & April Larson, Taylor Hansen from team USA. The USA girls did not really get going and had many bad rolls, especially Taylor. No Matter what she tried it was not going their way and team Europe came out convincing winners 6-1.

USA trailing 4-1 going into the evening session, needed to pull something out of the bag and it was the General himself, Nick Evans who restored some pride with a victory over Patryk Statkiewicz 6-3. Johnny Archer the Scorpion has given these youngsters a nickname and Nick lived up to that. Throughout the sessions the General has been right behind his team and is certainly the voice needed to inspire a comeback.

Next up was the talented Drake Niepoetter USA against Europe’s youngest member, Maxim Dudanets. This match was to produce the first hill-hill match and it was the young gun from Europe who took the spoils much to the disappointment of Drake Niepoetter 6-5.

Europe now led 5-2 and the USA could not afford to lose the last match of the evening session otherwise they would have a mountain to climb. Up steps April Larson who showed some courage and skill to see off the talented Marharyta Fefilava 6-3 and bring the score more respectable, USA now trail Europe 5-3 going into day 3.

There was a big sigh of relief in the USA camp as April sank the winning 9-ball and it was that man again, the General, spurring April on to victory along with the entire team who sat behind her throughout the match.

Day three gets underway on Friday starting at 14.00h local time with three matches in the afternoon followed by four matches in the evening session. It is a race to 11 and USA need to come flying out of the blocks to put pressure on the Europeans as a slow start could be fatal for them.

A link can be found through the official Atlantic Challenge Cup web pages http://www.x-patspoolleagues.com/#!atlantic-challenge-cup/c5ay along with the match schedule and results.

The event features the best six junior players (four boys and two girls) from Europe and America in a competition to see who will have the bragging rights across the Atlantic.

The event takes place at Patricks Canadian Tavern in Rankweil, Austria from the 1st to the 4th of July, 2015. The official match table is supplied by Dynamic Billard and the official cloth is Iwan Simonis 860. Saluc will supply the Aramith TV Pro-Cup balls for the inaugural staging of the Atlantic Challenge Cup.

The Atlantic Challenge Cup is organized by the EPBF/IBPF in cooperation with the BCA/BEF.