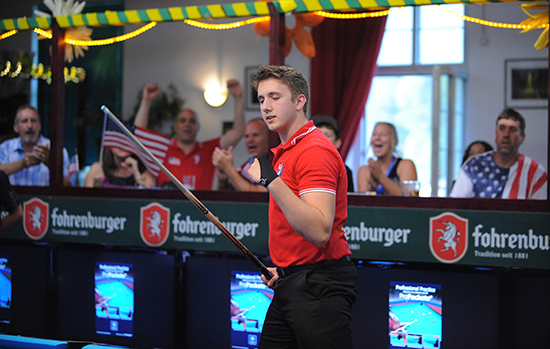 DAY 3 Team Europe go into day four leading 9-6 after a miraculous recovery from team USA. Coming into day three, the USA trailed 5-3 and everything seemed set for a close day of matches but team Europe had other ideas. The afternoon session was a disaster for team USA after they lost all three matches.

The mixed doubles of Maxim Dudanets & Marharyta Fefilava and then Raphael Wahl & Kristina Tkach put team Europe 7-3 in front, beating USA’s Nick Evans & April Larson, then Drake Niepoetter & Taylor Hansen respectively, with the latter losing a hill-hill match. Next was a singles match and up stepped Tyler Brandom against Europe’s Daniel Tangudd but he had no answer for the European’s strength and Daniel dominated the match winning convincingly 6-2.

Trailing 8-3 going into the evening session and knowing that Europe only need three of the four matches to end USA’s dreams, they all knew they had to step up a gear to avoid an embarrassing defeat. In comes Joshua Franklin who has been lightly used so far in the format and what a start he gave team USA. Up against what most people considered Europe’s strongest member Raphael Wahl, he took the bull by the horn and threw down the gauntlet to his team members by beating Raphael 6-3 to make the score 8-4 in Europe’s favor. 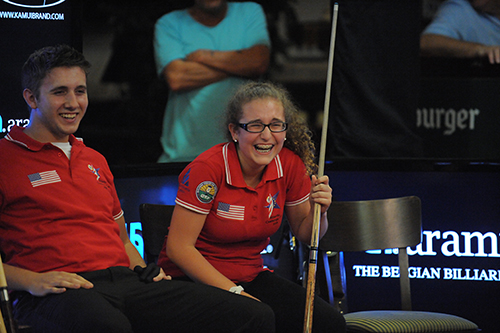 This seemed to breathe life into the team but there was another setback to come in the next match as Tyler Brandom & Taylor Hansen lost the mixed doubles match against Europe’s Daniel Tangudd & Marharyta Fefilave 6-5. This was the third hill-hill match that the USA had lost and shows that the overall score could have been much closer that it actually was.

With Europe now leading 9-4 and just two matches to go in the evening session, a mixed doubles and boy’s doubles was all that remained. That quiet young man who performed so well in his singles match earlier, Joshua Franklin did it again. Partnering April Larson they ensured USA were still playing on day four by beating Patryk Statkiewicz & Kristina Tkach 6-3. This had the whole USA team and fans literally dancing in, and around the arena.

Next it was the Generals turn, Nick Evans who has certainly been the voice of team USA pulled of another terrific display. Partnered by the strong Drake Niepoetter, they took on Raphael Wahl & Maxim Dudanets and produced some amazing pool to win the match 6-4 and make the overall score 9-6 for Europe.

There has been some amazing pool played here at the Atlantic Challenge Cup and with six singles matches still to play on day four, it is going to be one cracker of a day here in Rankweil Austria. There is a heat wave outside and boy is it getting hotter in the arena with everyone geared up for another thriller when play gets underway at 15.00h local time.

A link can be found through the official Atlantic Challenge Cup web pages http://www.x-patspoolleagues.com/#!atlantic-challenge-cup/c5ay along with the match schedule and results.

The event features the best six junior players (four boys and two girls) from Europe and America in a competition to see who will have the bragging rights across the Atlantic.

The event takes place at Patricks Canadian Tavern in Rankweil, Austria from the 1st to the 4th of July, 2015. The official match table is supplied by Dynamic Billard and the official cloth is Iwan Simonis 860. Saluc will supply the Aramith TV Pro-Cup balls for the inaugural staging of the Atlantic Challenge Cup.

The Atlantic Challenge Cup is organized by the EPBF/IBPF in cooperation with the BCA/BEF.