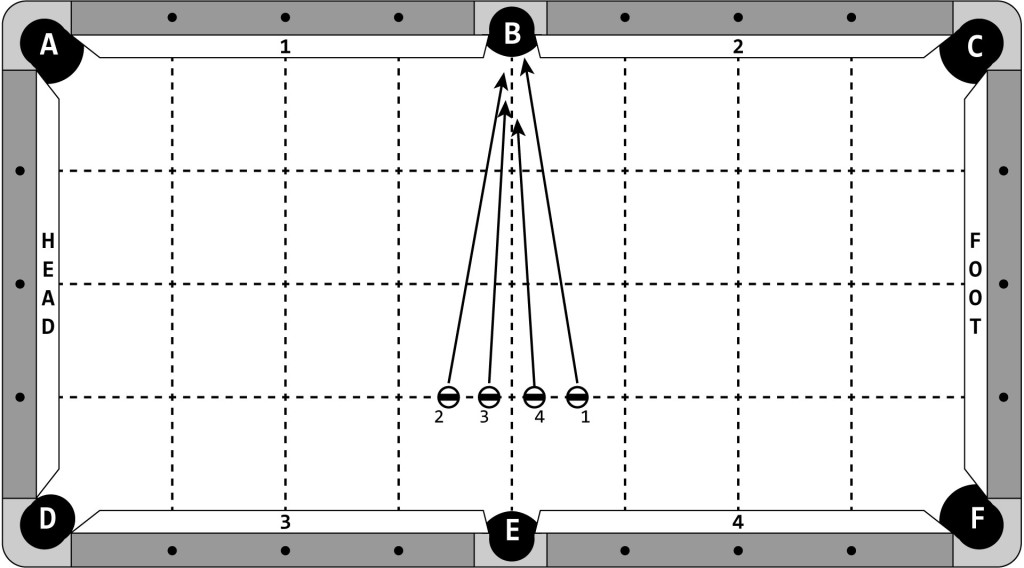 One of the most amazing types of trick shots is speed shots. You’ve probably seen a number of variations of these, usually done by lagging a timing ball towards a pocket and then firing a bunch of other balls in before the first ball gets there. Any trick shot artist will tell you these shots are as much about speed control on the timing ball as they are about being fast with the other balls.

I invented this month’s shot turning the speed concept on its head. I’ve used it to great effect in a number of Ultimate Trick Shot Tour tournaments and am glad the shot is now in the WPA Artistic Pool shot program.

Four balls are lined up on the 1st diamond line with a one ball width spacing in between them. Here, though, the objective is to shoot the balls from left to right, lagging the first three balls (2 through 4) toward the side pocket and then firing in the last one (1 ball) so it goes first! All the balls will end up going in numerical order. Not only do you have to be quick transitioning between balls, but you have to maintain consistent speed control between them. The last ball is pretty easy as long as you have enough of an angle to squeeze it by the other balls.

If you’re having trouble with four balls, try it with three. In fact, I first started shooting this with three balls but from the center of the table. It really helps to get the speed of the table down first. This shot plays easier on faster tables since you can just tap the first three balls softly. Also, aim the 2 ball towards the left part of the side pocket so you maximize room for the 1 ball to go in later. Finally, you may also want to try reversing the balls and shooting right to left. Some people are more comfortable walking backwards versus forwards while shooting, especially if you’re a lefty.