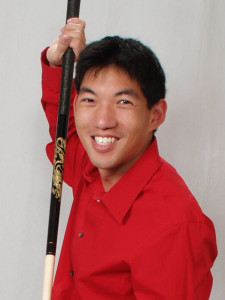 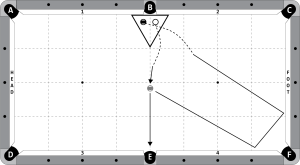 This is an advanced wing shot which includes a couple jumps as well. A wing shot is shooting the cue ball at a moving object ball. Normally, balls are rolled by hand down the table (search for videos of Earl Stickland doing wing shots for fun) and cut into the corner. Here though, you jump the object ball out of rack and have it go two rails. While it’s still moving, jump the cue ball out of the rack and pocket the object ball in the side pocket.

For an easier version, you can put two racks around pocket ‘E’ to guide the object ball in. Then all you have to do is worry about making contact. Also, putting some sort of obstacle along cushion 4 (such as the aforementioned rack) keeps you from laying up the object ball close to pocket ‘E’ which would make the shot a bit easier.

Timing is obviously an important factor in this shot. Get the speed of the object ball down so it trickles towards the center of the table. This will make it easier to hit as well as easier to aim. This also minimizes its momentum so it won’t drift towards the head rail as much after getting hit by the cue ball.

It’s hard enough to aim a jump shot when the balls are stationary, so it’s even more difficult when the ball is moving. Once I get my speed down, I just pick a spot to aim the cue ball, usually at cushion 4 just to the side of pocket ‘E’. Then I pull the trigger when the object ball just gets to my line of aim knowing not only will the object ball track towards the head cushion due to its momentum, but I’ll cut it that way because it will have moved from when I actually shoot the cue ball. In summary, slow speed, pick your aim point, and time your shot!