2015 will mark the 10th consecutive year the World Tournament of 14.1 will be staged. This is the longest consecutive run of the championship since the 1960’s.

New York City, NY – Dragon Promotions is pleased to announce the 10th consecutive year that the world’s oldest billiard event will be produced. This year’s confirmed dates for the 75th World Tournament of 14.1 will take place on July 6 – 12, 2015. For the third straight year, Steinway Billiards in New York City will host the prestigious championship. A star studded field is already forming for this year’s lineup to win the world’s grandest straight pool championship.

“We are very pleased to be back at Steinway Billiards once more. New York City is the perfect home for the World Tournament where the fans really appreciate the artistry of 14.1”, said Cindy Lee, CEO of Dragon Promotions. 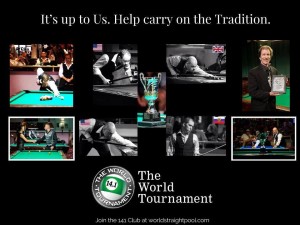 “It’s undeniable that this is one of the most looked forward to events of the year for pool enthusiasts. The amount of fan letters and support builds every year that it’s overwhelming and rewarding for us”, says Charlie Williams, Executive Producer of the World Tournament.

Become a proud sponsor of the most prestigious and classiest event in the United States, the World Tournament of 14.1 which has been ongoing since 1912. For only $250, become part of the elite 141 Club and garner all the benefits that well exceed the money you spend. Click here for full details. We invite you to join this year’s 75th anniversary event in New York City as a supporter or attendee. For those interested in a higher level of support as one of our advertisers or elite World 14.1 Patrons, please reply here or call 407-782-4978 . Please read below an important message from the Executive Producer of the championship.

As we enter a new year in billiards, we would like to update you on Dragon Promotions plans for the 75th World Tournament of 14.1

First, we unfortunately will not have the patron sponsorship backing of Dr. Michael Fedak. The good Dr. Fedak will be supporting other causes outside of billiards which need him. We thank Dr.Fedak for his enormous generosity the past 4 years in helping us elevate straight pool.

Without the revival of the World 14.1, the pool world would never have seen new legends of straight pool created for generations to come 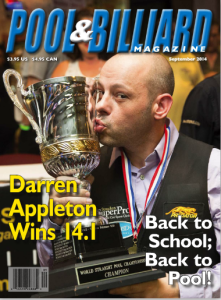 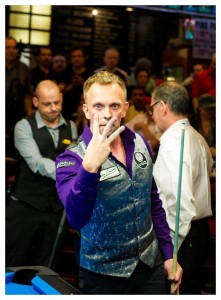 The good news is, The World Tournament of 14.1 is on and confirmed 100%. We are committed to continue this tradition and have been since it’s revival back in 2006.

But we will still need your help and support , as well as the support of many others. The more we get, the more we can do.

Throughout a decade, Dragon Promotions has been able to revitalize straight pool back into the sport and to new audiences. In 2006, straight pool was near it’s complete death in the US. Since then we have poured our resources in media, finance, and know-how to grow the popularity of 14.1. Today, the consensus among the professionals on tour is that the World 14.1 is one of, if not the most, important titles to win in America. Something we didn’t expect all those years ago.

So as we pledge to continue this noble crusade for the 10th straight year in a row, and hopefully for many years to come, so we ask you as well to lend your support.

I personally have been and will continue to be pounding the pavements to raise sponsor funds for this year. The two primary events at hand will be the 5th Straight Pool Hall of Fame and the 75th World Tournament of 14.1 . We have had the privilege of having legends return to the forefront in Ray Martin, Jim Rempe, Oliver Ortmann while giving deserving due credit to bygones such as Jack Colavita, Frank Stellman, Gene Nagy, and 14.1 inventor Jerome Keough. We feel it’s very important for us to keep these traditions alive. We anticipate doing fund raising events in NYC and other locations. We welcome brainstorming ideas.

Many of our past elite sponsors will continue their support of the event. We thank Tom Gleich, Stu Mattana, Harold Siegel and Dr. Gregory Diehl who have already pledged to continue their sponsorships.

On behalf of the pool community, we thank you gentlemen.

Please do not hesitate to call me or email if you would like to join our team in continuing the oldest, longest tradition in billiards.