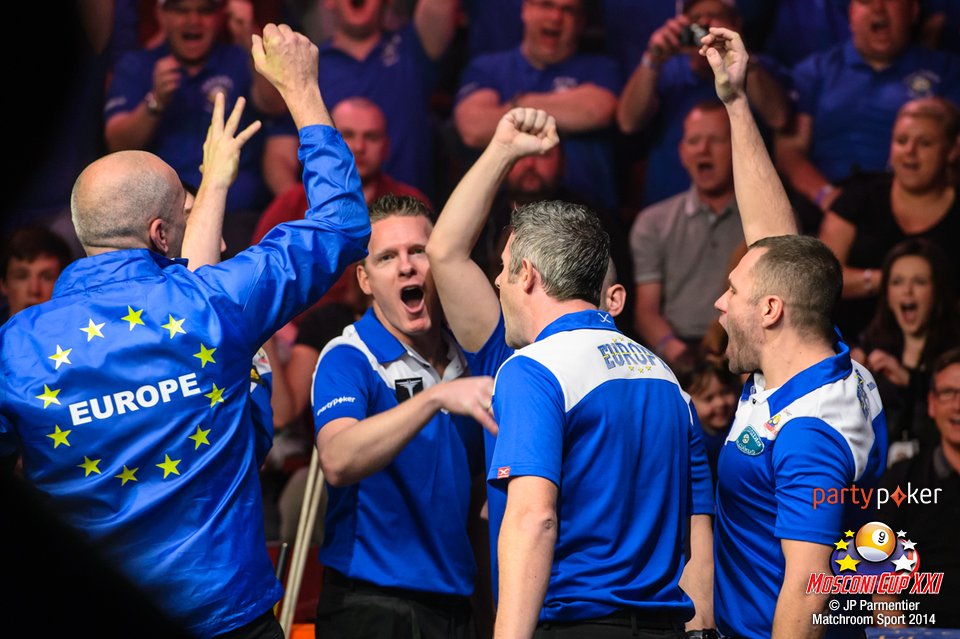 TEAM EUROPE will take a 3-2 into the second day of the PartyPoker Mosconi Cup after an exciting evening’s play at the Tower Circus, Blackpool. Played out in front of a capacity crowd at the Victorian amphitheatre, it was tense stuff from start to finish as the spectators played their part.

Having endured a pounding in Las Vegas last year, the new-look American side got off to a sticky start as they lost the team match but then found their feet to take the lead in the Mosconi Cup for the first time since day two back in 2012. 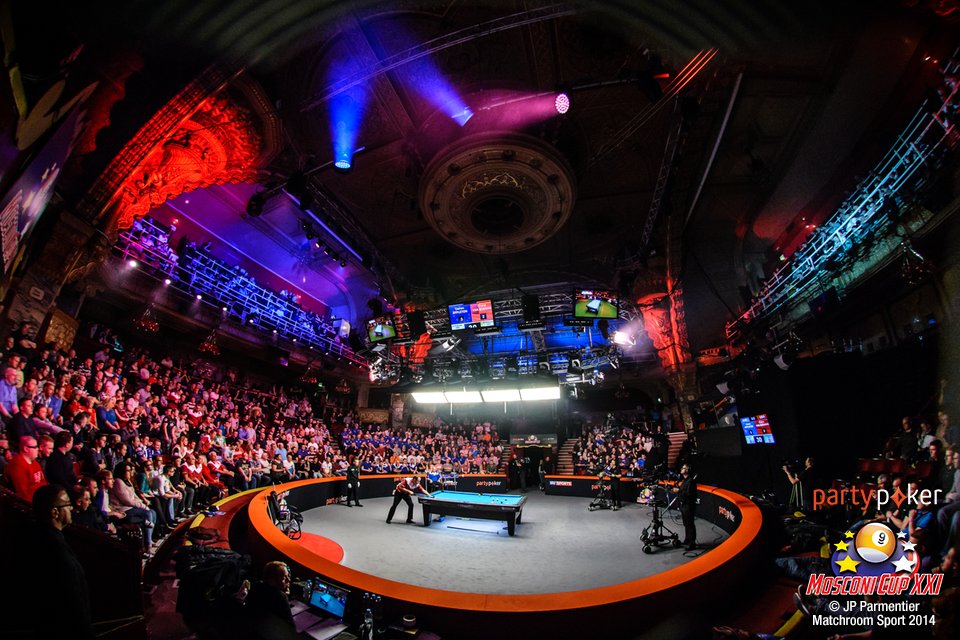 The evening ended disappointingly for them as their star man Shane Van Boeing took a hit in the two remaining matches to allow Europe to win the session.

American captain Mark Wilson said, “We expected a world-class performance from the opposition and they gave it to us. They didn’t take us lightly and they played the better pool today.

“We were nervous but it is a good nervous where we feel like we are solid and just want to get through the energy in the room. 3-2 isn’t what we had planned but we are still really positive.

“We had Shane stacked on the back end of the session figuring that we would get one of those matches but to Darren’s credit he played fantastic pool and didn’t let Shane really establish himself in the match, so hats off to Europe.”

Johan Ruijsink, making his seventh appearance in the event, said: “The crowd is great, there are over 1,000 people cheering us on and we don’t want to let them down. The players need to really focus on the table otherwise it will get to them.

“The last two points were massive. John Schmidt played very well and we were more or less even in the other matches. It was important for Niels and Nikos to get us to 2-2 otherwise we couldn’t play to win the session in the final match.

“They won it and we had the big singles match, Shane against Darren. There was some really good pool there and Darren came out on top.

“We didn’t take them lightly and prepared very well but it might still be in the players’ minds that USA were missing some big players. But they have a good coach, young energetic players who have worked together for a year, so we knew we had to be prepared. It came as a bit of a shock to be 2-1 down but I am glad that we could turn it around in the end.”

It was a baptism of fire for the young Americans as they went down 5-1 in the opening team match. After Deuel had won the opening rack after a Karl Boyes scratched off the break, they enjoyed little good fortune as the Europeans took advantage. With the 1,100 strong crowd in full voice the Americans looked a little shell-shocked at times as their opponents took the point.

The few American fans in the crowd had something to cheer about the second game as Justin Hall and Corey Deuel fell over the line against the English pair of Darren Appleton and Karl Boyes.

Making his debut, the 26 year-old Hall looked confident at the table while Deuel missed some easy looking balls and seemed uncomfortable at times.

Appleton and Boyes though didn’t look in the same comfort zone as when they won the recent World Cup of Pool and when Boyes hit the knuckle of the centre pocket in attempting to pot the 9 ball, it summed up their match as Deuel rolled it in for the win.

Commented Hall, “It was a big point. It was either going to be 2-0 or 1-1 and maybe it broke the ice a little bit. Quick is an understatement, the table is playing like an ice rink and I am just trying to pinch the ball and not move the cue ball around too much.”

“I had a tough shot on the nine, I was frozen on the rail and I was hoping it would go in. It hit the bottom draw and dropped in. It is not easy out there but you have to suck it up,” added Deuel.

Seasoned vet John Schmidt silenced any doubters as to his inclusion in the side with a great performance that saw him come from behind against Mark Gray to put his side in the lead at 2-1.

At 3-3 every one was a break and run before a long 5/9 combination from Gray failed to come off. With the balls out in the open, Schmidt had a great opportunity to take the rack against the head which he did to move to the hill at 4-3.

The winning strike was a crafty 3/9 combination after Schmidt downed the 1 ball of the break and then a down the rail shot on the blue 2.

“Anybody who says they don’t feel nervous is lying; I was shaking like a leaf,” said Schmidt.

“The good thing is if I can play like that being so nervous, maybe I can settle in and start to feel my arm. I was going purely on instinct.

“Any time you play Mark Gray you have your hands full. He is a fantastic player and I think we broke and run eight times. The level of play was unbelievable and luckily I got that one.”

In the final doubles match of the evening, Nikos Ekonomopoulos and Niels Feijen took a comfortable win against Justin Bergman and Shane Van Boening as the Americans had no answer as mistakes were capitalised on.

Commented Feijen, “That was mega important because if we went 3-1 down we lose the session. We played decent; the table slid a bit more than in the practice room but Nikos played some unbelievable shots.

The crowd sure makes you focused. It’s the biggest venue I’ve ever played in and we need them. They help you as you don’t want to let them down or the team down, but it’s pressure!”

That set the scene for the final match of the evening which saw Shane Van Boening take on Darren Appleton for the honour of winning the session. It was a high quality match as each rack went with the break but a dry from Van Boening in the seventh was Appleton’s opening and he took that rack and then the next off his break for the win.

“It was very important that match; to lose the first doubles was a bit of a downer, but the last two matches were huge,” said a relieved Appleton.

“They played well but we dug in and you want to win every session and to win the last two matches against best player in world is a massive boost going into tomorrow,” he added.

The 2014 PartyPoker Mosconi Cup is broadcast live throughout on Sky Sports in the UK and Ireland and ESPN3 in the United States. For fans outside those territories, it is available on www.livesport.tv