TIME FOR THE GOLD RUSH IN DOHA 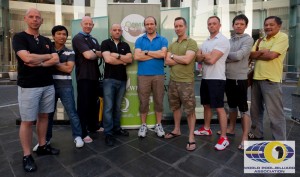 (Doha, Qatar)–There’s been a tangible buzz in the lobby of the Holiday Villa Hotel here in blazing hot Doha over the last two days. As the best pool players on the planet began to arrive for the 23rd running of the WPA World 9-ball Championship, and the hubbub and loud banter of players, their friends and officials have filled the place with life, you could sense that something special was starting to brew.

Part of that expectation surely comes from the fact that pool’s best of the best only get a few chances a year to gather together and duke it out for big time glory. And that lack of marquee events means that when a major tournament does come around, it feels that much extra special. And when you talk about majors, well, it doesn’t get much bigger than this one. Ask any pool player which is the one event they want to win and all would say this one; the World 9-ball Championship, pool’s crowning triumph.

Clearly, though, this year’s edition promises even more fireworks than ever before.  The 128 players from over 40 countries that will begin play on Saturday at the Al Saad Sports Club in Doha make up as good a field as fans have seen in years, with 27 out of the world’s top 30 players, and nine World 9-ball champions ready to battle here.  But let’s take a step back for a minute and take a quick glance back at the qualifiers which just ended late Thursday night, to understand the depth of quality here. 128 players from all over the globe had entered the qualifiers for a chance at 12 spots in the main draw. While around half the field probably had little chance of progressing to the main stage, the rest were a collection of amazing pool talent. The qualifying tournament could have been considered a big time professional event all by itself.

This will be the fifth straight year that that the tiny Gulf country of Qatar has hosted the World 9-ball Championship. Once again the players will be broken up into 16 groups of 8 playing a race-to-9, alternate break, double elimination format.  Four players from each group will make up the final 64, which marks the start of the always tense and dramatic single elimination phase of the tournament.  Matches will then become race to 11, alternate break. The final, which takes place on June 27, will be a race to 13.

Defending champion Thorsten Hohmann of Germany received his WPA Player of the Year crystal cup at the players meeting on Friday night, and he’ll be hoping to raise another bauble come June 27th.  But even Hohmann would acknowledge the steep hill he and anyone else hoping to win will have to climb to enter the winner’s circle here.

As usual a slew of great Filipinos lead the field in terms of numbers, as 11 Pinoys will be vying for the crown, including among them Dennis Orcollo, Lee Van Corteza, last year’s surprise runner up Antonio Gabica, semi-finalist Carlo Biado, Jeff de Luna, Warren Kiamco, and of course the legend, Efren “Bata” Reyes. The Filipino players always enjoy a bit of home court advantage in Doha as the massive Overseas Filipino Worker contingent here turns out in droves to cheer on their countrymen, especially Reyes, who is a real live folk hero wherever he goes.

Taiwan brings the second largest contingent to Doha with 10 stellar players in the field. It’s been 9 years since a Taiwanese captured this title-then 16 year old Wu Chia Ching in 2005-and with their  talent on hand here this week, the island nation just might finally get another one. Ko Pin Yi certainly has the tools to get the job done, as do recent China Open winner Chang Yu Leong, Chang Jun Lin, Fu Chei Wei and several others.

The Europeans, as usual, are set to shine. 2013 World 9-ball Champion Darren Appleton of Great Britain is a heavy favorite this week. Fellow Englishman Karl Boyes always plays well in this event and reached the semis last year. The Netherlands star Niels Feijen has won all over the world but he has yet  bag the big one. But “the Terminator” has really upped his game over the last year and is expected to progess far this week. Greece’s Nick Ekonomopolous always brings his ‘A’ game to the big stage. Also on fans’ radar are former champions such as Finland’s Mika Immonen, Germany’s Ralf Souquet, and England’s Daryl Peach.

China has never won a World 9-ball Championship but their government backed talent pool will surely pull off the big one soon. Rising star Wang Can, former champion Wu Jiaqing(formerly Wu Chia Ching who now plays for China), and the bespectacled Li Hewen, who came within one rack of winning here two year ago, all could bring the the gold back to the world’s most populous nation in what would surely bring this game to new heights.

It’s been 12 years since an American-Earl Stickland-won the World 9-ball Championship. Shane Van Boening has surely earned the accolades as one of pool’s greatest players over the last few years. Van Boening, though, has yet to perform up to fans’ and his own expectations overseas. Can “the South Dakota Kid” finally catch a gear while playing far from home?

While pool’s marquee players are surely going to dominate the storylines, it’s often the unknowns who provide a lot of the excitement and drama each year at the World 9-ball Championship. Ever since the tournament came to Doha five years ago, the advances made by players from the Middle East has been nothing short of astounding.  It may no longer be considered an upset if a Middle Easter players dumps a  big name and gets as far as the semi-finals this week.

Whatever the outcome on June 27th, the next 7 days are guaranteed to provide pool fans around the world with everything they could ever want; amazing pool talent and brilliant shot making, edge of your seat tension and drama, and upsets and surprises right up until the very last 9-ball drops.

The Qatar Billiard and Snooker Federation, which is once again hosting and organizing the World 9-ball Championship, will be providing free live streaming of the entire tournament on its website, http://live.qbsf.qa/.

The view the complete brackets for the Group Stages, please CLICK HERE

The WPA will be on hand in Doha throughout this year’s World 9-ball Championship providing up to the minute information, live scoring, photographs and in depth articles with insights and analysis from WPA Press Officer Ted Lerner.