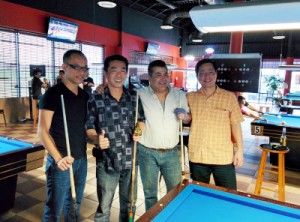 US Bida in Houston Texas hosted a local B championship on Saturday March 1st. The event was sponsored by Judge Jay Karahan, an avid billiard player and respected member of the Harris County judiciary. Judge Jay added $500 to the prize fund and helped officiate the event. Our host, Tim Nguyen, provided a wonderful lunch and beverages for both players and spectators. It was a grand day for billiards!

Fifteen B players from Houston and as far away as Dallas assembled for play in this exciting one-day tournament. The format was a popular one among local players in Houston, with all games to 18 points at each stage of the event. The field for the prelims was split into five groups of three to play round robin. That meant two or three games per group, with the top two moving on to the semi-final round, along with two wildcards by draw. The twelve players for the semis were again split into groups of three for round robin play. And lastly, the top player from each of the semi-final groups moved on to the 4-man single elimination finals.

The top four players emerging from the prelims and semis were Dung Truong, Quang Tran, Luis Castillo, and Hoan Ton. Dung Truong came from Arlington Texas to play in the event. He has traveled to Houston before, but had his best showing so far defeating local player Daniel Ho in his semi-final group. Quang Tran also advanced from his group with a strong showing, going undefeated to that point. Luis Castillo in the third semi group was trailing 14-8 in his semi-final round when he exploded with a run of 8 (high run in the event) to take the lead. Two billiards later Huy Hunh was finished and Castillo moved on. In the last semi-final group there was real excitement. Nacho Galindo, Hoan Ton and Nghia Nguyen all finished with 1-1 records as can happen in the three man round robin format. In addition, Nacho and Hoan both had the same total points scored. So according to the rules of the event we had a shootout from the break. Nacho made the break shot but could go no further. Hoan also made the break shot, and on his second shot saw a freak bounce score the point on a scratch to take the match.

In the finals Quang Tran defeated Dung Truong while Luis Castillo defeated Hoan Ton. With the crowd around the table for the final game we watched Castillo jump to a quick lead against Tran and never look back. Castillo finished the tournament undefeated with a strong final performance of 18-6 to take the $450 first prize. Quang Tran received $350 for second and Dung Truong and Hoan Ton both received $250 for 3rd/4th.

With the B championship behind us, next week (March 8), the national qualifier at US Billiards will give the A players in Houston their turn at the tables.