Tuesday Update from the 15th DCC

The one pocket competition is down to 49 players going into the last two days of play. Round 6 will kick off play on Wednesday at 10 AM.

9 Ball will also start Wednesday with the player meeting at noon followed by the draw and play to start at 1 PM.

The “Big Foot” 10 Ball has completed the first round of the five round single round event. The race was reduced from 15 to 11 due to the extended field of 32 players. See the chart below for the results from Tuesday and the Schedule for Tuesday.  Big Truck and Inside Pool will have FREE Live streams from the Wednesday matches.

Day 4 of the 15th Derby City Classic would see the 9-Ball Banks come down to three great players.  Shannon Murphy with the only re-buy, Justin Hall winner of the 2012 Southern Classic 9-Ball Banks and Hall of Famer Francisco Bustamante. The first semi-final would be Murphy playing Bustamante.  Bustamante would win to give Murphy his first loss in the tournament.  The next round would have Murphy playing Hall to see who would meet Bustamante in the finals. On this night Hall would eliminate Murphy in third place to move to the finals.

Bustamante came out firing to take an early lead 2 to 0 and get on the hill. But Hall was not done taking game 3. In the fourth rack Hill had the misfortune of scratching and owing a ball.  But he made up the difference to get ahead three balls to two. A miss by Hall gave Bustamante an opening and he took control to close out the match 3 to 1 and claim the 2013 9-Ball Banks Championship.

Day 4 UPDATE FOR THE 9-Ball Banks

The 9-Ball Banks is down to three players, Shannon Murphy, Francisco Bustamante and Justin Hall. The semi-finals will start with Bustamante versus Murphy starting at 7 PM Eastern Time streamed live PPV on the Accu-Stats table.  Murphy is still holding a re-buy and Justin Hall got the bye for this round.  Finals are scheduled to start at 9 PM and streamed PPV by Accu-Stats.

Day three comes to an end with 9 rounds completed in the Banks competition with 10 players still remaining.  Round 10 starting at 12:30 PM on Monday will have Shannon Murphy as the only player still holding his buyback chip.  Shannon has been shooting great from day one with his 3-0 defeat of Shane VanBoening on the TV Table. Round 10 with start at 12:30 PM with the Semi-Finals at 7 PM and Finals at 9 PM streamed live on Accu-Stats.

Day three was also the start of play of the One Pocket competition with field a of 280.  The first round will carry over into Monday starting at 10 AM.

Tuesday Update from the 15th DCC

Tuesday was the Banks and One Pocket Hall of Fame induction dinner. The inductees for this year were Shannon “The Cannon” Daulton and Larry Price.  Larry Price was one of the great players we lost in the past year. He was inducted into the Banks HOF having won the DCC banks in 2002 and 2008.

Shannon “The Cannon” Daulton is the first person to be inducted into both the Banks and One Pocket HOF on the same ballot. Shannon joins only four other players that are in both Hall of Fames, Nick Varner, “Cornbread Red” Burge, Leonard “Bugs” Rucker and Eddie Taylor.

Day two of the Derby City Classic would see the 9-Ball Banks move into the fifth round caring over into Sunday. The biggest surprise was Shane VanBoening getting Knocked Out after only two rounds. Shane suffered a first round loss to Shannon Murphy 3-0.  Then with his buy back he draws another great player Jeremy Jones who knocked him out 3-1. This will almost eliminate Shane from three-peteing as The All Around Champion, having won it in 2011 and 2012.

The Ring Game is six players with $1000 buy in and 10 balls on the table. Each player has 20 chips worth $50 each. In the first three racks each ball is worth $50, then increases in the next two racks to $100 and goes up $100 every 2 racks until one player has all the chips. There is a draw for shooting order at each increase. The six players for 2013 were, Shannon Daulton, John Brumback, Brian Groce, Shannon Murphy, Justin Hall and John Morra. After six racks and the ball value at $200 there were two players remaining. John Morra, 2012 Derby City 9-Ball Banks Champion, playing Justin Hall, 2012 Southern Classic 9-Ball Banks Champion.  Going into the 8th rack the ball value increased to $300 and the players were close to even in chips. But after some great play by both players Justin Hall was holding all the chips and the $6000. 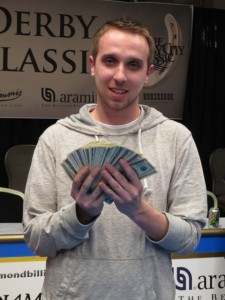