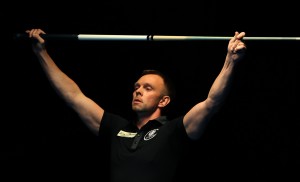 (Doha, Qatar)–Playing with a laser-like focus and an intensity that spoke of a clear desire for pool immortality, Germany’s Thorsten Hohmann capped an incredible week with yet another a searing performance,  and won the 2013 World 9-ball Championship, beating the Philippines Antonio Gabica, 13-7, in front of nearly 1000 highly partisan Filipino fans at Doha’s Al Arabi Sports Club.

With the victory Hohmann now becomes only the second man to win the WPA World 9-ball Championship two times, matching American Earl Strickland, who won pool’s most prestigious crown in 1991 and 2002. Hohmann will now also take over as the World Number 1 ranked player.

Hohmann’s second World 9-ball Championship comes exactly ten years after he burst on to the international scene with a powerful run through a stacked  field in Cardiff, Wales in 2003.  In the intervening years Hohmann has firmly established himself as one of the greats of this era, consistently winning events big and small all over the globe.  He excels at various other pool disciplines as well, especially straight pool, for which he is arguably the best in the world.

But while the last ten years have placed the 34 year old Hohmann in pool’s elite, his performance this week in Doha has surely brought his stature into rarefied air. Along the way to the title he defeated a who’s who of pool strong men, among them the defending world champion Darren Appleton, and five, yes five, top Filipino players, including four in a row down the homestretch.   And don’t forget to throw in the fact that Hohmann did all this in front of what was essentially a highly partisan home crowd of mostly Filipinos who cheered wildly for their boys.  Looked at in total, that’s a masterpiece by anyone’s standards. 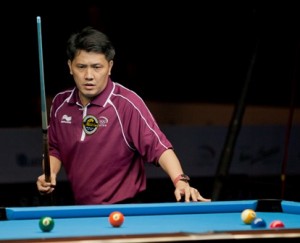 For Gabica, the loss to Hohmann ended what had become one of the great Cinderella stories pool had seen in years. The 41 year old Filipino had always been known to pool fans as a superbly gifted player, but one who, except for a few occasions, would collapse under the pressure of big time matches.

With the pool scene practically dead in the Philippines, Gabica sought greener pastures, and four years ago emigrated to Qatar, where he took up a job as an assistant coach with the Qatar national pool team. During that time he has stayed off the international pool circuit, only playing in the World 9-ball Championship since it came to Qatar in 2010, and practicing long hours at the local federation. Gabica’s run through to the finals this year literally electrified the game, with huge, partisan crowds turning the Al Arabi Sports Club into what seemed like a football match instead of a pool tournament.

The excitement was literally palpable as the day began on Friday with the two semi-finals, which were played simultaneously.  On the main table, Hohmann faced the Philippines, Carlo Biado. While on a nearby table Gabica went up against England’s Karl Boyes.

Biado, who’d been playing brilliantly up to this point, learned quickly that you don’t make more than one or two mistakes against a player like Hohmann and expect to get away with it. Especially when the German is picking up a head of steam. Two errors by the 28 year old Filipino in the first half of the contest  pretty much sealed his fate as Hohmann took a tight match early and quickly made it a rout. In what amounted to a pool clinic, Hohmann won 11-4.

Boyes played perfect pool in the first half of his semi-final against Gabica, who stayed on the Brits’ coat tails. Up 6-4, though, Boyes missed a makeable four ball. From there the entire match turned, and the crowd grew ever louder as their hometown boy played perhaps the best pool of his life. Gabica won  seven straight racks to clinch a spot in the finals as the throng chanted “Ga-Bi-Ca! Ga-Bi-Ca!”

By the time the race to 13 final began an hour and a half later, the Filipino fans, all of whom live and work in Qatar, were in a fever pitch at the prospects of having one of their own win an unlikely world title. They had every reason to believe they would get their wish as Gabica, who won the lag, came out relaxed and broke and ran the first rack. Hohmann returned the favour, but then so did Gabica to go up 2-1. When Gabica cleared off a Hohmman mistake in the next frame for a 3-1 lead, the anticipation grew even more.

Hohmann, though, wasn’t going anywhere. He took advantage of two illegal breaks and a bad jump shot by the Filipino to take his first lead of the match at 4-3. But Gabica countered with three racks of his own, first a clear off a botched safety by the German, a break and run, and another clear from a safe that included a wild bank that sent the crowd into fits.

At this point Gabica was exactly where he wanted to be. In front 6-4, he was playing silky smooth and it looked like he couldn’t miss. Then in rack 11, he had a wide open table and was down on an easy straight in five-ball. Inexplicably, though, the five-ball bobbled in the jaws of the pocket. Gabica, and the crowd, couldn’t believe it, and the Filipino walked back to his chair visibly upset as Hohmann stood up and cleared. Instead of a commanding 7-4 lead, Gabica only led 6-5.

As fast as anyone could say “World 9-ball Championship,” the momentum completely abandoned Gabica and swung over to Hohmann, who was more than ready to pounce. In the next frame Gabica scratched off a brilliant Hohmann safety and the German tied the match. Hohmann then took the lead at 7-6,  running the table after another illegal break from Gabica. Hohmann got Gabica to scratch again in the next rack, and, in the blink of an eye, led 8-6.

The two players were now clearly going in opposite directions. Gabica was still visibly upset by the missed five-ball three racks prior, while Hohmann zeroed in on the finish line with laser-like focus. Gabica bobbled the two ball in the jaws in the proceeding frame, and Hohmann made a strong clear to move up 9-6. As Hohmann broke and ran the next frame, his demeanor, his potting, his eyes, all indicated he was squarely in the zone and there would be no stopping him.

Now up 10-6, Hohmann tied up Gabica again and forced him to foul. Another strong break and run, and Hohmann was on the hill, 12-6. Gabica got one back in the next frame, but the ‘Thorsten Hohmann Express’ could not be stopped. The two played safe in the next rack but Hohmann fluked the one-ball  and ran the colors straight to his second world championship. As the final 9-ball dropped, Hohmann raised his cue high over his head with both hands, giving it a big fat kiss. He then let out a fist pump and a roar, and flexed his muscle for the crowd.

Moments afterward, the new World 9-ball Champion was clearly in awe of what he had just accomplished. Like all pool players, he’s had to deal with his share of doubt. But this week, he said, he knew there was something special about to happen.

“I’m really proud of myself,” Hohmann said. “It means a lot to me. If I had to choose between my first World 9-ball and here, I couldn’t make that decision because winning the first world championship back in Cardiff was incredible and to do it again ten years later, I’m just speechless.

“I’ve been around for 20 years now. I’m not a youngster anymore. I’ve made many mistakes. And I’ve learned from my mistakes. It doesn’t mean that you don’t make mistakes again. Everything just worked for me. I was in stroke. I came from a big victory that meant a lot to me a couple of weeks ago. In my personal life I’m really happy right now. And I thought I really could win this from the beginning to the end. I never had a doubt.

“The whole universe has to come together and work for you to win a tournament like this. But I never had doubts. I always believed in myself. I always felt that I can win this.”

For Gabica, the fairy tale roller coaster ride that he had just been on wasn’t enough to mask his obvious disappointment. Especially about the errant 5-ball that turned the match.

“I didn’t feel the pressure on that shot,” Gabica said. “I was just careless. I’ve played 30 years and I have many experiences.  I got upset because I was ready to go 7-4 up. That’s a big big mistake. I think at that moment I had too much confidence.   Maybe this is a learning experience for me. I’ll be thinking about that 5-ball for one week.”

The Filipino also knew that he had let a golden chance at history slip through his grasp.

“Thorsten played very well and he’s very fit.  As he got more of a lead on me, he got more confident. That’s the way it is in pool. But me, I started to feel the pressure.”

*The World Pool-Billiard Association is the world governing body of the sport of pool. 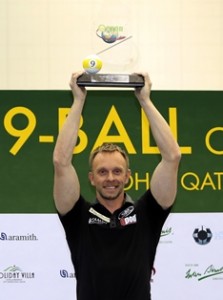