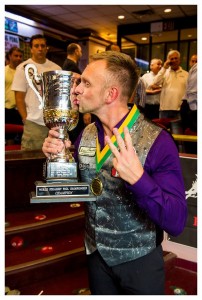 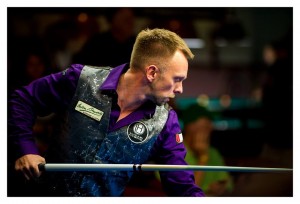 New York, New York – Germany is once more back on top of straight pool with Thorsten Hohmann claiming the crown of World Tournament champion once more. The Fulda native defeated England’s Darren Appleton to claim the title a record three times, more than anyone in 50 years.  Dragon Promotions and Dr. Michael Fedak brought another globally star studded field at this year’s 73rd Olhausen World Tournament hosted by Steinway Billiards in New York on August 19th-24th, 2013.  Live stream broadcast was provided by www.insidepool.tv . Through additional support from such sponsors such as Olhausen Tables, Championship Cloth, Aramith Balls, Amsterdam Billiards, Pool & Billiard Magazine, Master Chalk, and now FURY Cues, the absolute best pool players from around the world arrived on the birth country of 14.1 once more to attend this prestigious event. All to vie for the coveted title of greatest straight pool player in the world. 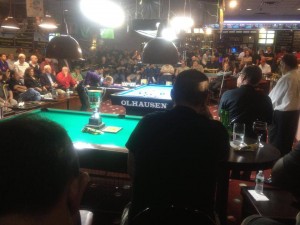 Standing room only as every seat for the finals was taken

The finals started with Hohmann taking first blood with a 42 ball run. Appleton came back and tied the match. Both players had blowout leads in their previous semi-finals matches, but it could be seen early on the mental fatigue was setting in. 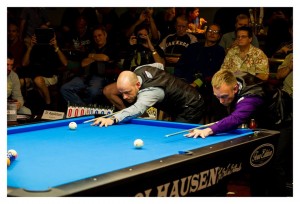 Hohmann would take the lead back at 134 to 52 before missing an open shot. Appleton made a nice 50 ball run but was stuck later and tried a difficult combination involving 3 balls. He missed the shot leaving at 115 balls. But amazingly Hohmann ran only 3 balls before committing a out of the sky foul when he double hit the cueball to the gasp of the audience. Appleton ran a short run however before relinquishing the table back to Hohmann with both players needing under 70 balls for the championship.

Hohmann could only muster another rack and a half though before he scratched on his break shot off the stack and hit the side rail and crossed to the other side pocket. However, Appleton ran till he needed 36 balls and again missed. He had the option to take an intentional foul because he forgot that Hohmann was on a foul first.

Needing 18 balls for the win, Thorsten ran to 196 and had a great break shot lined up. But after making it, he made the next ball and overran position and was stuck in the pile with only needing 2 balls at 198. He studied the table for awhile, and eyed a 1ball for some time. It looked as if Appleton may have one more chance, but Hohmann made the 1ball and the next shot to complete his journey to the title once more. Hohmann had only 1 loss in the event during the round robin to Earl Herring, and had made a total of 1650 balls.

“I’m so happy right now to win this again. It’s been an incredible two weeks and playing 14.1. It’s my first time to win in the capitol of straight pool, New York City which has the greatest 14.1 fans in the world”, said an elated Hohmann.

“I’m a little sick now from losing especially after my strong performances earlier. But Thorsten is a great champion and winning this three times is an incredible achievement. But second sucks!”, said Appleton to the laughter of the audience in the after finals speech 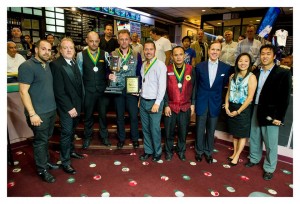