Manila, Philippines- The Philippines can now claim to be a force in women’s pool as well as men’s, now that Filipina Rubilen Amit has captured the JBETpoker.net Women’s World 10-Ball Championship. After 5 days of hard fought play with 48 women from around the world, the dust settled with only Amit standing. But Amit was certainly not the favorite when the final day started with more experienced players from Japan, Taiwan, and Austria in the mix.

The first semi-final would be Amit versus Akimi Kajitani of Japan. The match was scheduled live for TV at 2pm, but the arena at SM Mall North Edsa was already packed with every seat filled 3 hours before the tournament would even start. Kajitani would by far be the more experienced player placing 3rd in two world championships and has been a staple top women’s player in asia for a decade. Kajitani’s first shot of the match was a low percentage long 5 ball with the cueball near frozen to the rail and she fired it in and forced followed for position to come back up table. She then had a tough cut on the 6ball which she made and than ran out. This seemed like a good indication Kajitani was going to be tough. Kajitani won the next game playing strong and built a 2-0 lead, and then finally showed weakness when she missed a 7ball to make it 3-0. This was the air Amit needed and she took the game and from there Kajitani kept a 1 game lead till 3-3. Then Amit took the lead at 4-3, but lost it again at 5-4. But with the crowd behind her, it fueled Amit to surge forward. Though both players were not playing stellar pool, Amit was solid enough to win the match 9-6 and make it to her second world championship finals appearance. 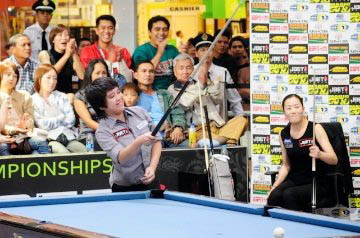 The very likable Amit smiled her way into the finals

“This event has been amazing. The stands were already packed and every seat taken as soon as the mall opened at 10am. They have been waiting here for hours. I’ve never seen this at even the men’s world championships” commented Anthony Suntay, one of Asia’s top sportscasters for television. 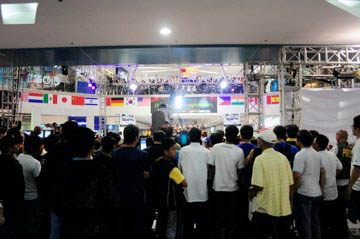 The arena was filled past occupancy before the players even arrived

The second semi-finals had crowd favorite Jasmin Ouschan up against the most experienced player of perhaps the entire championship, Taiwan’s Shin Mei Liu, a 2x World Champion. Ouschan was clearly hungry to be crowned The World Champion. The night before in perhaps the best played match of the event, Ouschan won a tight 9-7 victory over Yu Ram Cha (KOR) and screamed a victory roar with a giant fist pump in the air. In the semi, Ouschan came out strong with a 2-0 lead. but gave Liu a chance to keep it close, which she did. In a match filled with errors and several opportunities to both players, the score see-sawed until 6-6. Liu had looked nervous the entire match, and even the night before in the quarter finals gained much needed luck after a miss on an easy 8-ball at hill hill with Kelly Fisher but left her a hard 8-ball which gave Liu the eventual win. Ouschan was visibly distraught during the match as she was watching her chance to win the gold slipping away. Liu took the lead after another mistake from Jasmin and trailing at 7-6, Jasmin did the unthinkable and missed with ball in hand after a Liu foul. The normally stoic and stone faced Ouschan looked like she was on the verge of tears as she watched Liu run out for a 8-6 lead. After a much needed bathroom break, Ouschan returned but again missed a opportunity to run an open table and Liu finished off the rack with a 9-6 win. The young 22 year old Ouschan would have to settle for bronze again and wait one more year for her chance. 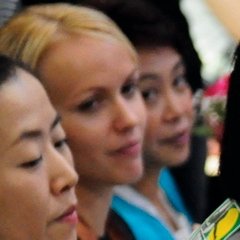 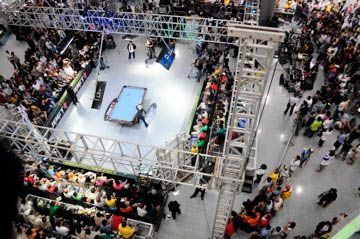 Ouschan made many fans during her visit. Ouschan will be back for sure

The Philippines couldn’t ask for a better finals match-up. Taiwan versus the Philippines, the biggest rivals in all of Asia, perhaps the entire world between two countries. Rubilen Amit, the shy and soft spoken short Filipina looking for her first big win. And on the other side Shin Mei Liu, the most dominating woman’s player in all of Asia with two world championships already under her belt.

“Look at this place! There hasn’t been an empty seat here all week” said Jay Helfert, Co-Director of the Women’s World 10-Ball and expert billiards analyst. “Dragon Promotions doesn’t just do a tournament, they put on a real show. This field is strong, the playing conditions are good, and the play has been high level. It’s been a great tournament. Whoever leaves here with the win really deserves to be the World Champion.”

“There was 1500 fans in the amphitheatre watching yesterday, and over in the TV arena we had over 1000 people. So there was some concern on where everyone would fit for the final day when we would only be down to the TV table. The upper levels of the malls are all packed up to the 4th floor, which worked out nicely for us”,said Cindy Lee, CEO of Dragon Promotions.

As the players came through the smoke into the arena as the announcer called their names, the fans boomed roars for Amit. In a championship where names like Fisher, Lee, Corr, Cha, Lin, Kim and many others were expected to be at the end, Amit found herself in destiny’s shoes again.

The match began with Liu striking first blood taking the first rack very cleanly. Amit came back with the next rack and then the next taking the lead, never relinquishing it. Liu kept it close at 4-3, but Amit then started pulling away as the crowd became more and more boisterous at the prospect of a Filipina World Champion. Liu was clearly affected by the home crowd as they cheered whenever Liu gave up the table back to Amit.

“When we play in Taiwan, they do the same thing, except over there they literally stand up and give an ovation when a foreigner misses” commented one pro player.

At 8-4 leading, Amit faced a kickshot and called it in the side pocket, which the entire event was played with call shot rules. The cueball went 2 rails and kicked the five ball into the sidepocket to the roar of the fans and Liu sat in her chair smiling as she knew this day was not meant to be for her. Amit ran out to the hill and then broke and ran the final game to dominate 10-4 in the finals and become the first ever Women’s World 10-Ball Champion. 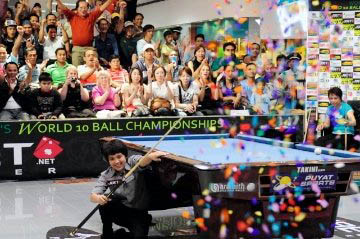 “This reminded me of Rocky 4 when he fought the Russian in Moscow. The whole country was behind the Russian, just like the Filipinos were behind Amit. But this time the hometown favorite wins,”observed Charlie Williams, Co-Owner of Dragon Promotions and top pro player.

The matches were all aired live on ABS-CBN’s Studio 23 nationwide, The Filipino Channel worldwide, and ESPN Star Sports throughout Asia. The event was scheduled to end at 6pm, but went past 2.5 hours until 830pm. But the TV networks didn’t mind at all.

“Dragon Promotions did an excellent job marketing and producing the event. It’s been more than a homerun and surpassed our expectations. What a debut!” commented Peter Musgni, VP of ABS-CBN Sports.

“This is truly big for the Philippines and for billiards. This win will also inspire many new talents, just like Reyes did when he won the World Championship. I really want to thank Dragon Promotions for coming here and making this possible in the Philippines” said Aristeo Puyat in a small speech to the press. Puyat is known as the Godfather of Pool in the Philippines managing players such as Efren Reyes, Francisco Bustamante, Alex Pagulayan, and Rubilen Amit.

“I am very grateful to all the sponsors of the event and Puyat Sports for managing me. Of course I thank Dragon Promotions for making this event. I really hope I get invited to more international tournaments, especially in America where I always have dreamed to go” said Amit.

Complete group updates and results can be found at www.womensworld10ball.com

The historic event drew unprecedented media coverage for women’s billiards. It is considered to be the biggest women’s sporting event of the year for the Philippines, and one of the biggest in Asia as it draws massive media attention with 40 hours of match coverage going to over 40 countries with 20 hours live on ESPN and equally in its local partner ABS-CBN, the leading TV channel of the Philippines. 48 women from around the globe will attend the event vying for $20,000 (1M) 1st place prize out of the $75,000 (3.75M) purse available.The event is produced by Dragon Promotions and takes place in Manila, Philippines at the SM Mall North Edsa June 2-6,2009. 48 top women pros from around the world are vying for gold to become the Jbetpoker.net Women’s World 10-Ball Champion. The historic event is supported by JBETpoker.net, ABS-CBN, SM Mall North Edsa, Magic 89.9, Crowne Plaza Galleria Manila, Predator Cues, Takini Cloth, Puyat Sports, Philippines Star, Bugsy Promotions and recognized by the BMPAP. www.WomensWorld10Ball.com will feature the latest news and results of the Women’s World 10-Ball Championship. It will also feature interviews, pictures, and all the info of complete player roster,prize money and match-ups.
“Billiards, the sport of the Philippines. The sport of the people.”
For more info email womensworld10ball@gmail.com