TAP Licensee of the Month

Jeff Chappell was born and raised in southern California.  He graduated high school and earned an Associate in Automotive & Diesel in Glendale, Arizona.  Jeff started playing pool in 1978, as a child on his dad’s table.  He started playing in pool leagues in 1995 and competing in tournaments.  His other hobbies include automotive restoration, playing poker and camping. 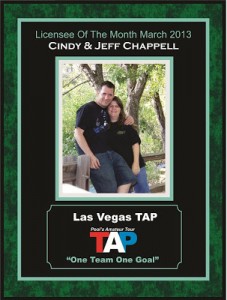 Cindy Chappell was born in St. Louis, Missouri and grew up in Las Vegas, Nevada.  She graduated from a technical trade high school with secretarial science as her vocation and earned her Associate in Business with Honors at the local community college.  She worked for 26 years at Nevada Power Company, working her way up to a telecommunications analyst and project manager.  She has 3 children and 7 grandchildren.  She spends her spare time caring for her grandkids, playing pool, camping and developing websites.

Jeff and Cindy met in November 2003 and were married in 2005.  In December 2006, they were offered and seized the opportunity to purchase TAP League in Clark County with 18 teams.  They opened Chappell Billiards LLC, dba TAP Las Vegas in January 2007.

TAP actually started in 2002 in Las Vegas, but did not have league operators who could devote themselves to its growth.  From the beginning, Jeff was dedicated to the new business.  Cindy retired from her job in mid-2007 to fully dedicate herself to TAP.

After just 2 short years, the league tripled in size.  In 2009 the recession hit and the league continued to run consistently with approximately 60 teams, where it stands today.  TAP Las Vegas, Chappell Billiards and the Chappell’s have weathered the recession quite well in a city that has been plagued with the highest unemployment rate across the entire United States.

Jeff and Cindy each has their own strengths and accomplishments that complement one another that make the two a great team and TAP Las Vegas the best league in southern Nevada.