CORTEZA CASHES IN! FILIPINO LEE VANN CORTEZA IS ALL BUSINESS AS HE CAPTURES THE CHINA OPEN 9-BALL CROWN

(Shanghai)–Playing with his trademarked calm and cool demeanor, all the while exhibiting a deadly stroke and a fierce, quiet fortitude, the Philippines Lee Vann Corteza staked his claim to stardom today as he defeated Taiwanese veteran Fu Che Wei to win the 2013 China Open 9-ball in Shanghai.

The win means that the China Open title, one of pool’s biggest tournaments, remains in the Philippines at least one more year, as Corteza’s win follows countryman Dennis Orcollo’s victory in 2012.

The victory, besting a quality field of 64 top players from around the globe, is easily Corteza’s biggest  to date in a professional career that has spanned nearly two decades.

For the last five of those years, Corteza’s pedigree had already been established far and wide. Everywhere he has played fellow players and fans could see that under Corteza’s humble veneer and boyish smile lay a deadly serious and focused professional with a noticeable swagger that oozed confidence. This is a man who has something inside him that doesn’t allow him to flinch under pressure. This is a man who knows how to close out a match.

All of these traits were on full display today in front of over 500 people at the Shanghai Pudong Yuanshen Stadium arena. The match was played at an extremely high quality with 12 of the 17 played racks being break and run outs. The outcome turned on just a few mistakes, and it was Corteza who took advantage and nailed the door shut every time he was given the opportunity.

As they had all week, both Corteza and Fu remained untouchable in their respective semi-final matchups which took place earlier on Sunday morning. Corteza easily defeated surprise entry Omar Al-Shaheen of Kuwait, 11 – 3. Fu put a halt to the marvelous run of former two-time world champion Wu Jiajing, 11 – 8.

In the finals, the 34 year old Corteza won the lag and broke and cleared the first rack in the alternate break match. The pair traded racks and neither missed a single ball as the Filipino led 2-1. Corteza’s first chance to gain some distance came in rack four when he cleared off a Fu miss on the 1-ball to take a 3-1 lead. Corteza broke and ran the next rack to move up 4-1. The Filipino would never be threatened the rest of the way.

Fu continued to play well, and continued to break and run racks, but so did Corteza plunking the cue ball dead square in the center of the table on the break and potting 2, 3 and once even 4 balls. Down 7-5, Fu had a brilliant opportunity to narrow the lead in rack 13 when Corteza scratched. Fu was clearing the table beautifully until he missed an easy 8-ball and was soon down 8-5. 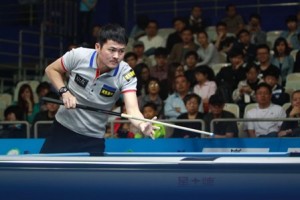 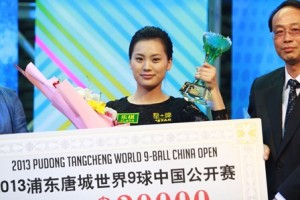 Fu forced a foul in the next rack to close to 8-6, but Corteza, as all great champions do, put pedal to the medal and sprinted home, while Fu wilted down the stretch. Corteza won going away, 11-6.

Afterwards the low key Corteza was typically reserved, but the satisfaction of his accomplishment was all too clear.

“I’m so happy right now I really don’t know what to say,” Corteza said. “This tournament is so hard there are so many good players. I tried not to be under pressure and I really enjoyed myself this match. That was one of the keys today. I was relaxed. And that also helped me to stay focused the whole time.

“For me this means a lot to win this tournament. It’s been three years since I won a big tournament. And the way I won this, playing really well and of course I get a few lucky rolls, this is going to give me a lot of confidence in the coming months. This is a big win for my career.”

As expected Fu was  disappointed as the loss meant his second defeat in the final of major in the course of one year. In 2012 he lost in the finals of the World 8-ball championship in Fujairah, United Arab Emirates to fellow Taiwanese Chang Jung Lin. Fu indicated that while he was playing well all week, he could never get 100% comfortable with the new tip he had put on his cue stick the just before the China Open began.

“I had a problem with my cue tip today,” Fu said through an interpreter. “Just before the tournament I changed my tip and I’m really not used to it. But before rack 13 I felt like I was playing good.  Then when I missed that 8-ball in that rack, that was it. After that I didn’t play good. And he also played good. He deserves to be the champion.”

*The World Pool-Billiard Association(WPA) is the world governing body of the sport of pool.