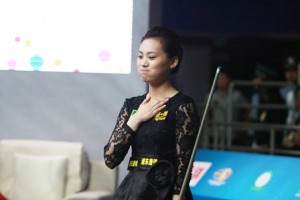 (Shanghai)–Coming into Sunday’s finals of the 2013 China Open, Liu Shasha knew she was on the cusp of a golden opportunity to vault her way back to the upper echelons of not only the fiercely competitive world of Chinese women’s pool, but also the entire world of women’s professional pool.
Since coming out of nowhere and winning  the 2009 Women’s World 9-ball Championship held in Shenyang, China,  the diminutive and glamorous youngster has maintained her place on the Chinese national team, but she hadn’t won any tournaments.  In the lead up to this week’s tournament, with 48 top women players from all parts of the globe, Liu hadn’t been playing well in practice and was only hoping to at least reach the quarterfinals.

But suddenly she found herself in the finals of one of the biggest tournaments of the year. Indeed on Sunday,  in front of packed house at the Shanghai Pudong Yuanshen Stadium arena, Liu seized the moment , coming from behind in crunch time to overtake fellow teammate and young star Chen Siming to win the China Open by a nose, 9 – 8.

With the win, Liu can now claim two of the biggest prizes in women’s pool. She also joins her close friend and “sister” Fu Xiaofang who also has won these same two prestigious events.

For Chen, the loss had to be a massive disappointment.  The hard working and prodigious player, who many feel is China’s best natural talent, led the contest nearly the entire way only to see the dream die right when the finish line was in sight.

Chen was in stride early and jumped out to a 3 -1 lead in the alternate break match. Liu quickly got it together and tied up the match. But then Chen hit one of her high gears, which can be a thing of beauty to watch. Chen went up 5-3, then 6-4, then 7-4. She seemed to have an answer for everything Liu tried and appeared capable of fending off her opponent at will.

But as so often happens in pool, one mistake sends the momentum  over to the other player’s side. After a break and run by Liu to move to 7-5, Chen broke, but saw the cue ball get kicked into the pocket for a scratch. Lui made a calculated clear to close the gap to one, 7-6. Liu then stepped to the table and tied the match with a break and run out.

With the title down to a mere race to two, Liu got Chen once again as Chen left a safe open and allowed Liu to grab her first lead of the night, 8-7. Chen’s the consummate battler, however, and she broke serve in the 16th frame after winning a nervy safety exchange to leave one final rack to decide the champion. 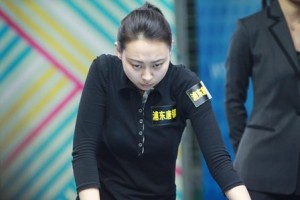 Chen broke and sent two balls down on the break. Position for the two ball was tricky and Chen bobbled the 1-ball in the jaws.  Liu came to the table with a look at the one and steadily picked off the colors. As she got down to the final 8 and 9 balls, she held her chest and took a deep breath, trying to calm herself as she stood on the cusp of victory. With raw nerves jangling, she potted the last two balls for the championship.

On the floor afterwards, Liu was greeted with warm hugs by a tearful Fu Xiaofang. The two are not really sisters, but they are practically inseparable, living together and playing pool together every day.

As she drank in the accolades, Liu expressed surprise that she was even standing in the winner’s circle.

“I am very surprised that I won this tournament,” she said through an interpreter. “I have not been playing well lately. We had a practice tournament before this tournament and I got 8th place. I was hoping to get at least to the quarterfinals in the China Open. I didn’t think I could win it. I’m very happy. This is my first championship in three years so this is something I am going to celebrate tonight.”

As usual with the Chinese women players, Chen, who also hasn’t won a big tournament in China in three year, was gracious to a fault in defeat.

“I think I played well. I missed one ball in the first half of the match. The second half I also played well but it was then that Liu didn’t miss a shot. When I missed she took that and played well. I’m happy that at least two Chinese players reached the finals.”

*The World Pool-Billiard Association(WPA) is the governing body of the sport of pool.